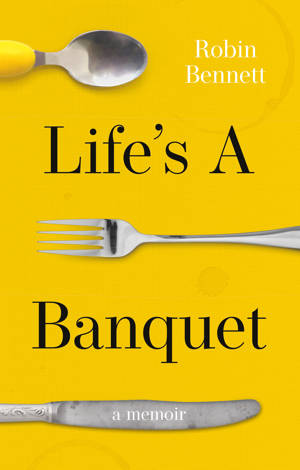 Posted on 2nd September 2019 By Nicola

I’m delighted to be taking part in the blog tour today for Life’s A Banquet by Robin Bennett. I have a great guest post by the author to share with you and would like to thank Rachel Gilbey from Rachel’s Random Resources for the place on the tour.

Life’s a Banquet is the unofficial but essential ‘guide book’ to negotiating your way through life – through education, family life and business, to relationships, marriage, failure and rejection.

Aged 21, Robin Bennett was set to become a cavalry officer and aged 21 and a half, he found himself working as an assistant grave digger in South London – wondering where it had all gone wrong.

Determined to succeed, he went on and founded The Bennett Group, aged 23, and since then has gone on to start and run over a dozen successful businesses in a variety of areas from dog-sitting to cigars, translation to home tuition. In 2003, Robin was recognised in Who’s Who as one of the UK’s most successful business initiators. Catapulting readers through his colourful life and career, Robin Bennett’s memoir is an inspiring tale.

I was given a grilling once by Margaret Thatcher. It lasted the time it took to get from the ground floor in Selfridges to the 4th floor – say, 6 minutes, tops – but it was ample time to make me a) feel a bit stupid and b) re-evaluate what I was doing with my life.

I’ve got form when it comes to meeting prominent people in unlikely places. When my wife and I were newly married we spent a few months in Australia, trying to do all the things you are meant to do when you are there but the weather was problematic. We spent 2 weeks in Sydney. It was cold and drizzly. One week on the barrier reef. It cycloned and all the beaches filled up with box jelly fish and people got stung. Then we went to the desert and it was literally pouring. I’ve never seen weather like it: not even in Scotland.

In desperation, we bought cheap ponchos one afternoon and set about walking around the circumference of Ayers Rock (Uluru). Unsurprisingly the place was deserted. There was just my wife, a park ranger, me, … and Bill Clinton. Coming around a fold in the volcanic rockface, we virtually fell into his arms. So we exchanged pleasantries, then parted, only to meet again about 5 minutes later. This time it called for a more personalised contact, so he asked where we were from and seemed pleased when I replied Henley-on-Thames: he told us he’d studied in Oxford and remembered the town, we chatted some more, he asked me where I got my hat and then we took different forks in the path.

Ten minutes later we bumped into him again. By now we’d had enough of Bill Clinton, and the park ranger was giving us suspicious looks, so we pretended not to see him.

And it goes on: I’ve been ticked off by the Queen Mother (for riding my bicycle on the Fair Mile), stood in companionable silence next to David Cameron whilst we watched our respective children on a merry-go-round very early one Sunday morning and I saw more of Boris Johnson, when he was our MP, than I see many members of my own family.

I’m thinking of this again this evening because I’ve just been speaking to my neighbour in France. Francis is probably the most contented person I know and, in many respects, he is the exact opposite of someone who has achieved prominence (or had it thrust upon them). He grew up in an orphanage and inherited a farm in our village from the kind lady who looked after him in the holidays. Francis has never been abroad, nor visited the major cities in his own country. Until he went to school, he didn’t even speak French, rather the local dialect, Bearnais. He has worked the same patch of around 100 acres for the last 50 years and looks like he is made entirely out of mahogany and bits of binder twine. I’ve spoken him most days over the last 3 years when I walk the dog. Francis is my friend.

On – admittedly – very, very brief aquaintance with these famous people, one thing I noticed is how quick they are to get to the point: Thatcher asked me who I was, what I was doing in Selfridges and decided I was wasting my time; Bill could see he had just stepped into someone’s favourite dinner party anecdote and did his best to be the charming, urbane former most powerful man on the planet we expected; even Cameron correctly read in an instant that this wasn’t a moment between two adults but was much better spent politely ignoring one another as we waved to our children revolving in a miniature double decker bus.

What is interesting is Francis has that very same ability to break things down to extreme simplicity. He never makes small talk, always gets immediately to the point and I feel better off for talking to him every day.

But not just that: one impression I always got from Boris was that for all his charm (he is charming) and his intelligence (ditto), he still (deep down) saw himself as superior to everyone in the room. Thatcher thought nothing of opining she knew what was best for me.  And my neighbour does the same thing: I think he feels desperately sorry for me that I have no fields and woods to call my own, if I want to eat, I need to go to a shop and I appear to have no roots, I’m drifting, I’m rudderless, otherwise why would I keep moving about the place.

So there you have it: the secret of a successful life is simplicity and a profound sense of superiority. If I was a greater man, I’d be able to sum it up in a word but, alas, my mediocrity burdens me: I need two.

I love this, Robin, thank you so much. You definitely have your fair share of dinner party anecdotes! Robin Bennett lives in Henley on Thames, Oxon. He is an author and entrepreneur who has written several books for children and books on the swashbuckling world of business. His documentary, Fantastic Britain, about the British obsession with magic and folklore, won best foreign feature at the Hollywood International Independent Documentary Awards.

Robin says, “When the world seems to be precarious and cruel, remember that the game is to never give up – there’s everything to play for, and it will all be OK.”