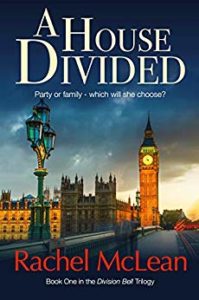 I’m delighted to welcome you to my stop on the blog tour for A House Divided by Rachel McLean. I have a fabulous guest post by Rachel to share with you today. My thanks to another Rachel from Rachel’s Random Resources for the place on the tour.

But when a terror attack threatens her family, her world is turned upside down. When the government she has served targets her Muslim husband and sons, her loyalties are tested. And when her family is about to be torn apart, she must take drastic action to protect them.

A House Divided is a tense and timely thriller about political extremism and divided loyalties, and their impact on one woman.

Political Thrillers on Page and Screen – Why Are They So Different?

When you think of a political thriller, what comes to mind?

For me, it’s intrigue. Corruption maybe. The pursuit of power. And politics with a big P.

I enjoy political thrillers that are centred on some sort of struggle for political power or domination. There are plenty of books that do this: House of Cards, The Ghost by Robert Harris, and (oh yes) The Song of Ice and Fire series by George RR Martin.

But that’s a fairly short list. And those books aren’t exactly recent.

If you look at the political thrillers charts on Amazon, these books are crowded out by a very different type of book: the espionage thriller. The charts are full of authors like L.T. Ryan, Andy Maslen, James Swallow and David Baldacci.

Sure, they touch on politics – the hero (and it’s always a hero) often has to fight an enemy that’s been identified by his political masters, and there’s a background of global politics. But the protagonists aren’t directly involved in the struggle for political power. To my mind, these are action books, not political thrillers.

If you look on the small screen, things are very different. Political thrillers on TV are exactly that. They include scenes in the House of Commons, White House or the equivalent in other countries. And the characters are battling for political supremacy.

The recent and hugely successful Bodyguard is one example. Yes, the protagonist is a cop. But there are political machinations and the show would be nothing without Keeley Hawes’ character, the Home Secretary.

Then there’s Borgen. The tale of a woman who becomes Denmark’s first female Prime Minister; it doesn’t get much more political than that.

What is it these dramas have in common that none of those political action books have?

It’s female protagonists. Political thrillers for TV are full of powerful women using their brains to get ahead.

So why aren’t these women represented in fiction? It’s a good question, and one I don’t have an answer for. Although I do hope to have a solution to it, in the form of my political thriller trilogy.

The Division Bell trilogy centres on Jennifer Sinclair. She’s a Home Office minister for whom politics comes crashing into her personal and family life. She has to choose where her loyalties lie, and whom she can trust. Book One, A House Divided, came out a few days ago, and is being lauded by reviewers as the book you should read if you’re missing Bodyguard. Something I’m not going to disagree with!

Maybe I can start a whole new sub-genre of my own? That would be pretty cool. Although it would be even cooler if other women started writing political thrillers with female protagonists.

So this is my challenge: politically engaged women writers (and I know lots of you), why not join me and start writing political thrillers that aren’t about men running around with guns? I look forward to reading your books.

Thanks so much, Rachel. I hope to see more of those kind of political thrillers in the near future. I’m Rachel McLean and I write thrillers and speculative fiction.

I’m told that the world wants upbeat, cheerful stories – well, I’m sorry but I can’t help. My stories have an uncanny habit of predicting future events (and not the good ones). They’re inspired by my work at the Environment Agency and the Labour Party and explore issues like climate change, Islamophobia, the refugee crisis and sexism in high places. All with a focus on how these impact individual people and families.

You can find out more about my writing, get access to deals and exclusive stories or become part of my advance reader team by joining my book club at rachelmclean.com/bookclub.