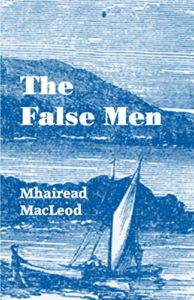 My apologies to Mhairead and Kelly from Love Books Group Tours as I should have posted this on the 27th. For some reason I hadn’t written the date in my diary and I’ve only just realised I missed my stop. So better late than never, I have a guest post from Mhairead to share with you today.

Jess MacKay has led a privileged life as the daughter of a local landowner, sheltered from the harsher aspects of life. Courted by the eligible Patrick Cooper, the Laird’s new commissioner, Jess’s future is mapped out, until Lachlan Macdonald arrives on North Uist, amid rumours of forced evictions on islands just to the south.

As the uncompromising brutality of the Clearances reaches the islands, and Jess sees her friends ripped from their homes, she must decide where her heart, and her loyalties, truly lie.

Set against the evocative backdrop of the Hebrides and inspired by a true story, The False Men is a compelling tale of love in a turbulent past that resonates with the upheavals of the modern world.

The Historical Highlander by Mhairead MacLeod

My historical novel, The False Men, is based on a true story, with the romantic imagery of Highland Scotland a character in itself.

The first popular romanticising of the highlands in novels can be attributed to Walter Scott, two hundred years ago. In his novels Waverley and Rob Roy, for example, Scott made the more colourful (and previously outlawed) aspects of highland culture (kilts, swords, distinctive language) alluring and newly acceptable to upper and middle class readers. On one hand his bias was a conservative one, that is, a nostalgia for the past in an idealised form, but through his fiction he was rehabilitating perceptions about the ‘barbarous’ highlanders. His novels are highly intelligent, and trace a deep conflict between impulses for the past and for a forward-looking Scottish sense of identity.

Like many of Scott’s successors, the highly popular Outlander series by Diana Gabaldon similarly represents the highlands in familiar tropes of wildness and the exotic. Characters are represented as wild because the landscape is, and perhaps because of the area’s ancient clan and cross-border conflicts. But this is a long way from the reality of Scotland and the complexity of the culture, a long way from the Scottish Enlightenment in science, philosophy and economic thought that thrived in the 18th century and led Europe intellectually. Even though the Outlander effect had its roots in the early 19th century, it is now firmly entrenched in the 21st, propelled by the centuries-old allure of romance.

The house of the historical novel has many rooms.

Mhairead MacLeod was born in Inverness, Scotland and spent her early childhood on the Isle of South Uist in the Outer Hebrides.

She now lives in Brisbane, Australia where she worked as an ethics lawyer, investigator and university lecturer. She holds Masters degrees in both Law and in Creative Writing.