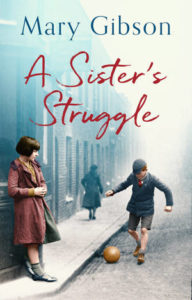 I’m so pleased to be taking part in the blog tour for A Sister’s Struggle by Mary Gibson today. I absolutely love the sound of it and only wish I could have found the time to read it. I do have a guest post by the author to share with you today all about the choices she has to make when she writes. My thanks to Vicky Joss from Head of Zeus for the place on the tour.

A young girl struggles to keep body and soul together in 1930s London, while her proud but spendthrift widowed father refuses to accept charity.

Ruby is always hungry, but she will go without if it means her young brothers can eat. 1930s Bermondsey might be called the larder of London, with its pie, pickle and jam factories, but for the poor working classes, starvation is often only a heartbeat away. When Ruby’s neighbour suggests she ought to go to the Methodist Mission for free food, Ruby knows her father will be furious, but that she has no other option.

It is a decision that will change the course of her life forever, split her family and in the end lead her to face a terrible choice between duty and a great love.

Writing a novel always involves making a series of hard choices- what or who to include or leave out; what and when to reveal something or keep it hidden. But the inspiration for a novel isn’t a matter of choice, that arrives of its own volition and the author is usually very appreciative when it does!

The initial inspiration for my novels always comes from a true story or anecdote. Recently I attended the funeral of my last remaining Bermondsey relative. Before her death at 93 Violet shared with me some fascinating stories about the hard times she had growing up in Bermondsey in the twenties and thirties, many of which have made their way into my novels in one form or another. A SISTER’S STRUGGLE is no exception.

A while ago Violet told me how as a youngster in the hungry thirties she would go to the Bermondsey Central Hall (against her mother’s express wishes) to join the hundreds of children queuing for a free breakfast of bread & jam & cocoa. The idea of accepting charity was anathema to many people and Violet risked her mother’s wrath every time she went there, but that didn’t stop her. In fact, she told me, she’d go back at lunch time for the free soup as well!

This tale sparked the idea for my young heroine, Ruby Scully, who is bringing up her two brothers without a mother, and becomes involved in the mission, simply because she and her family are at near starvation point.

For me, the initial inspiration for a story often brings with it a cast of characters – who introduce themselves and ask politely, or sometimes demand rudely, to be included in the novel. The real-life story, coupled with the characters then suggests a theme which I find acts as the glue in the story. The general theme of A SISTER’S STRUGGLE is what we would now call ‘the radicalisation of youth’. Poverty and deprivation are powerful incentives for finding a life purpose or an escape to a better life, and in Bermondsey during the thirties it wasn’t only religion that offered this. There was of course socialism, in the form of the Bermondsey Labour Party and its inspirational MP Dr Alfred Salter and his wife, Ada. Then there was the appeal of the Blackshirts and the British Union of Fascists.

The plot, for me, comes last, and this is where as a writer I make most of my tough choices. The main plot line in A SISTER’S STRUGGLE emerged from imagining what would happen if my young Christian heroine, while engaged to an upright Christian man, becomes attracted to a firebrand socialist, as well as having a brother who is a poster boy for the Blackshirts – I thought that would make an interesting mix!

When I read about the little known ‘Battle of Bermondsey’ of 1937  – when Mosley tried to march thousands of Blackshirts through the borough – I knew that my heroine, in spite of all her reservations about violence,  would end up on the street barricades, which the locals threw up as quickly as the police could pull them down! Here we would see all the characters in the novel, along with their loves and beliefs, coming into headlong collision. It forms the climax of the novel, the moment when my heroine Ruby finds her world turned upside down and then has to begin the process of making all her tough choices!

A SISTER’S STRUGGLE will be published by Head of Zeus in e book 1st December 2018, hardback February 2019 and paperback in May 2019

Thank you so much, Mary. The story sounds absolutely fascinating and it’s lovely to read about where some of your inspiration has come from. Mary Gibson was born and brought up in Bermondsey, south east London. After a thirty year career in publishing, she took the opportunity of early retirement to write a book of her own. Her début novel, Custard Tarts and Broken Hearts, was inspired by the lives and times of her grandparents in World War One Bermondsey. It went on to become a top ten Kindle best seller and was selected for World Book Night 2015.