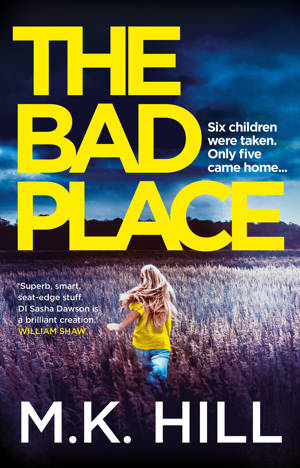 Posted on 8th September 2019 By Nicola

Welcome to my spot on the blog tour for The Bad Place by Mark Hill. I have a guest post by the author to share with you. My thanks to Vicky Joss from Head of Zeus for the place on the tour.

The newspapers called it The Bad Place. A remote farm out on the Thames estuary, where six children were held captive for two weeks. Five of them got out alive.

That was twenty years ago. Now adults, they meet up annually to hold a candlelit vigil for their friend who died. The only rule is that no-one can talk about what happened the night they escaped. But at this year’s event, one of them witnesses a kidnapping. A young girl, Sammi, is bundled into a van in front of their eyes.

Is history repeating itself? Is one of them responsible? Or is someone sending them a twisted message?

DI Sasha Dawson, of Essex Police, is certain that the key to finding Sammi lies in finding out the truth about The Bad Place. But she also knows that with every second she spends trying to unlock the past, the clock ticks down for the missing girl…

There are so many good things about being a writer. You can write what you want, where you want. You can drink a lot of coffee – the cafes in my local area have made a mint out of me. It’s fun and cathartic to send your characters to some very bad places. But you also have an important responsibility to your book. You carry it around in your head for a year or so, and at inopportune moments it will transmit to you from a deep place inside of you. And when it wants your attention, it will not be ignored, so be prepared to get very distracted at all times of the day and night. In the middle of a conversation, say, or a movie or an important meeting.

I love my life as an author and I wouldn’t change it for the world. I grew up reading genre fiction  – crime, fantasy and science-fiction – and always wanted to write a series of my own. It’s such a thrill – and frankly a relief – to be able to say I’ve delivered three crime books, with another one on the way. I write crime fiction because it’s the perfect way of setting a fire under the bottoms of my characters, getting them into massive trouble and then – sometimes, if they’re lucky – getting them out of it.

My first priority when I sat down to write The Bad Place was to make Sasha likeable. A lot of police novels make their protagonists interesting by giving them a dark secret or addictions, or to make them driven and obsessed, and I really wanted to write about someone who was just, you know – nice. I love a dark protag myself, I’ve got my own maverick detective in DI Ray Drake, who has so far appeared in my novels His First Lie and It Was Her.

But I really wanted to go in the opposite direction with Sasha and make her optimistic, friendly and respected by her team. Of course, Sasha isn’t perfect, she’s often distracted by her chaotic home life and her timekeeping ain’t so good. But she’s quietly determined and wants the best for people, she’s someone you’d really want on your side in a fix. We’re all attracted to compelling characters, but I don’t think nice people in detective fiction have to be boring, and Sasha (I hope) is proof of that.

Thank you, Mark. I love the sound of The Bad Place, and Sasha! It’s nice to see you here, thanks for coming.

I’ve been a journalist and an award-winning music radio producer. I worked for about five minutes in PR. But I write the Drake and Crowley thriller series now, which is just as well, because I love writing. It’s my dream job.

If you enjoyed my books, do get in touch. There are plenty of ways to do it!