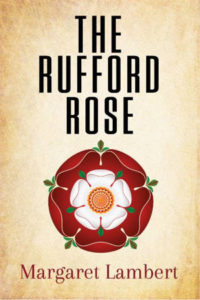 I’m so pleased to be taking part in the blog tour for The Rufford Rose by Margaret Lambert, with a great guest post by Margaret with five interesting facts about Rufford Old Hall. My thanks to Faye Rogers for the place on the tour.

When gifted young woodcarver Cuthbert Watts is sent to assist in the building of a new hall in Lancashire in 1530 little does he realise what difficulties lie ahead. The Master builder, Abel, resents his presence, refusing to see his work whilst Abel’s apprentice, Will is a lazy, jealous young man who thwarts Cuthbert at every turn. Supported by his fellow workers Cuthbert perseveres and after saving his life, befriends the young son of the owner, another reason for Abel to hate him. What is the reason behind this animosity? What great secret dominates Abel and Will’s life to the extent that lives are threatened, jealousies grow and violence, arson, kidnap and murder are committed?

Set in the Lancashire countryside in the 16th century this is a story which combines the practical difficulties of building a Tudor Hall with the loves and jealousies of those involved. When will Abel realise the value of Cuthbert’s work, when will Will realise he is not who he believes he is and can Cuthbert win the heart of the girl he loves. Follow Cuthbert through the trials and challenges of his new life and discover whether the hall can finally be completed.

Rufford Old Hall might never have been built at all if Robert Hesketh had not won the court case against his father’s three sisters. He was illegitimate and they contested he wasn’t eligible to inherit but his father had put his wishes into a legal document leaving Robert his title, estates and a vast fortune. This was accepted by the court and they had to concede. His father had urged him to build a Hall of his own rather than just inherit the old property and to put his distinctive mark on it. Rufford Hall was the result.

The Great Hall houses the only intact room screen of its type left in the country. Carved from solid oak, it weighs several tons and is described as movable despite its vast size. Three outlandish finials tower from the top of the main body, the origin of the strange carving having been lost in time. It created a screens passage between the hall and the domestic part of the house thus separating the main hall from the busy working area. The carvers who created it made three deliberate errors on it as at that time they believed that only God could make something perfect and trying to emulate God could result in death by hanging. It causes much comment and is something people love or hate. Certainly not something that would fit in a modern house.

The Hall was the home of the Hesketh family for four hundred years although they had  several other properties as well. It was never left empty, when the family lived elsewhere the Old Hall was used by Hesketh widows, eldest sons waiting to inherit, or was tenanted by local people. The local village school used it at one point. It has been altered, extended and modernised several times as fashions changed. They even used a lot of recycled pieces. The great arch in the Great Hall came from a previous building which they were demolishing before they built the current hall, so it was incorporated in the new. Later on, in 1720, a new wing was added and the roof was re-used from a nearby hall which was no longer occupied. They had to build the walls to fit the roof!

There is a secret chamber in the canopy of the Great Hall which was only discovered during renovations in 1949-50. The gable end at the west end of the hall had to undergo major work to eradicate death watch beetle and in the process a hidden cavity was revealed containing some papers from a priest’s missal. Was it a priest hole? Was the entry from the west wing which was demolished in the 18th century? We may never know, but the Hesketh’s were a Catholic family. During the time of the Catholic persecution when Henry VIII was getting rid of the monasteries there was an uprising in the North when many Catholics marched in protest at the destruction of the monasteries. It was called The Pilgrimage of Grace and their symbol was the five wounds of Christ. Far up in the roof on one of the bracing pieces in a dark corner there is a carving of this badge, the only religious symbol in the house and only visible by the family when seated at their high table. Visitors further down the hall would be unaware of it, but the family could look at it and gain courage from it.

In the garden there are two plants originally unique to Rufford, a yellow Day Lily called Hemerocallis Lady Fermor-Hesketh, named after one of the Hesketh heiresses who married into the family in the nineteenth century, and a Primula veris Heskethi discovered by the herbalist Thomas Hesketh (1561-1613), a descendant of the Robert who built the hall. Although they are now found elsewhere it is unusual to have two plants bearing the Hesketh name and reflects the interest the family had in their gardens.

Thank you, Margaret. It sounds like a fascinating building. Margaret  Lambert  has  always  lived  in  Preston,  Lancashire.  Married  with  two  grown-up  sons,  she  trained  as  a  Geography  teacher  but  also  taught  History  and  Religious  studies  in  secondary  schools.  A  member  of  the  National  Trust  for  nearly  fifty  years,  Lambert  has  volunteered  as  a  guide  and  conservationist  at  Rufford  Old  Hall  for  the  past  thirteen  years,  during  which  time  it  has  been  extensively  renovated.