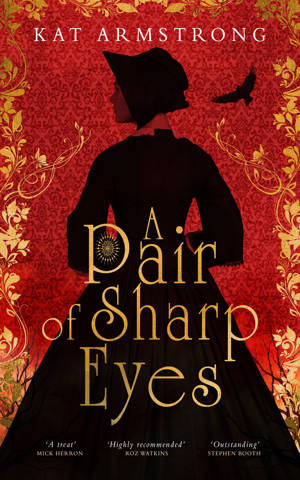 Posted on 9th September 2019 By Nicola

I’m so pleased to be taking part in the blog tour for A Pair of Sharp Eyes by Kat Armstrong today. I have a great post by the author to share with you all about location. My thanks to Kelly Lacey from Love Books Tours for the place on the tour.

Coronation hears of the murders before she even reaches the slave port of Bristol – six boys found with their throats slit. Horrified, she questions the locals’ readiness to blame the killings on Red John, a travelling-man few have actually seen. Coronation yearns to know more about the mystery. But first she has to outsmart the bawds, thieves and rakes who prey on young girls like her: fresh from the countryside and desperate for work. When the murderer strikes shockingly close to Coronation, she schemes, eavesdrops and spies on all around her until the shameful truth is out.

My novel A Pair of Sharp Eyes is set in Bristol in 1703. As a port Bristol was second only to the capital, but there are fewer novels set there than in London, and the eighteenth century is less familiar to modern readers than the nineteenth or even the seventeenth. I found it exciting to write a story based on a place that is recognisable yet mysterious – the medieval walled city my heroine Coronation (Corrie) knew has virtually disappeared.

As I planned the book I read widely in contemporary and modern historical sources, quickly realising that far from a West Country backwater, Bristol in 1703 was characterised by energy and change. I discovered lots of interesting and colourful facts, many of which didn’t make their way into the final draft. One did, though, because it says so much about the culture of Bristol in the early 1700s. Bristol’s rich merchant-venturers splashed out on expensive coaches to carry them to church on Sundays – not from piety, but to show off their wealth.

Obviously Corrie would have been familiar with certain landmarks: Brandon Hill, St Vincent’s Rock, the Royal Fort. But the river Frome was covered over in the nineteenth century, completely altering the layout and appearance of Bristol’s harbour, while three structures for which the city is famous today, the Clifton Suspension Bridge, the SS Great Britain and Temple Meads Station, were the work of the Victorian engineer Isambard Kingdom Brunel. Bristol for Corrie is a very different cityscape, dominated by church towers, tall market crosses, grand bridges, and of course ships’ masts.

At first I worried about getting things wrong. In the end I realised that since most of the places my characters would have known have vanished, I was free to create my own eighteenth century Bristol. I focused on evoking what it would have felt like to inhabit the city, encountering its huge port and grand churches, squares and bridges for the first time. To a twenty-first century observer Corrie’s Bristol would seem tiny, but she has grown up in a quiet Wiltshire village and when she first arrives the city is overwhelming.

I once read an interview with Anne Tyler which made the point that Baltimore as portrayed in her novels bears little resemblance to the gritty Baltimore of the TV drama, The Wire. Yet both versions of Baltimore are authentic in their own ways, and I hope that even if a citizen of Bristol in 1703 might not recognise every aspect of the city depicted in A Pair of Sharp Eyes, they would feel I have captured the essence of the place: ruthlessly competitive, and like cities throughout history, a magnet for young ambitious people from far and wide.

Thank you, Kat, for such an interesting post about the setting of your novel.