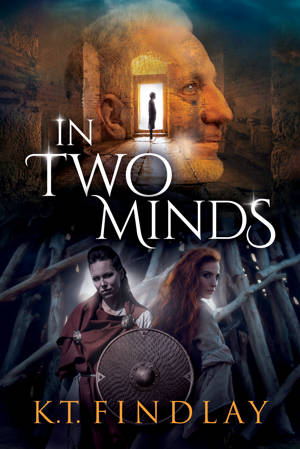 I’m so pleased to be welcoming K.T. Findlay to Short Book and Scribes today with a guest post about wilful ignorance! My thanks to Rachel Gilbey from Rachel’s Random Resources for the place on the tour.

Hurled twelve hundred years into the past, into someone else’s body, things could hardly be worse. And then the body’s owner wanted it back.
Museum curator Thomas and ten year old Anglo Saxon Wulfstan have to cope with a fifty year age gap, a huge culture clash and never knowing from one moment to the next who’s going to be in control.

As they’re trying to come to terms with it all, they inadvertently antagonise Wulfstan’s father, King Offa of Mercia. The King is already frustrated with his son’s “late” development and issues the boy a challenge. Wulfstan is given just a year to find and train ten slaves who can beat the King’s own champions in a fight to the death, but there’s a twist. When his son accepts the challenge, Offa turns the screws to make him back down and limits him to females only. In the brute strength world of Anglo Saxon battle they surely haven’t a chance, but Thomas convinces Wulfstan that if they can find the right women, a few new ideas and lots of training might just give them the edge they need.

In Two Minds is about how two completely different people, thrown together in the tightest possible way, can learn not just to cope, but to excel by using each other’s strengths. It’s also about kicking down doors and giving people a chance. Once they’re free, it’s the women themselves who are the heroes, seizing their opportunities and climbing to the top. But can they make it?

“Why on earth did you do that, you (substitute expression of choice for monumentally stupid person)? It must have been obvious what was going to happen!”

We’ve all been there at some point, watching someone else doing something incredibly dumb, and sometimes of course it’s the other way around… It’s our turn…

One reason why we do stupid things is simple ignorance. There’s some piece of crucial information we don’t have, and so we go blindly on our way, like a moth to a candle. But ignorance isn’t as simple a concept as it seems. We tend to think of ignorance as simply not knowing something, but there’s another kind that’s far more interesting, and that’s wilful ignorance.

In wilful ignorance we ourselves conspire to remain ignorant, or to remain wedded to a particular world view. Human beings are remarkably good at this it seems, and we’re even better at it in groups than we are as individuals. Now most of us will be feeling a certain smugness at this point, thinking to ourselves that we’re far too intelligent, well informed or educated to fall into that trap, but intelligence and education don’t seem to be especially effective vaccinations for this behaviour.

Last night I was watching Doctor Michael Moseley’s excellent BBC series, The Story Of Science, specifically episode 5, What is the secret of life? It brought home to me with a bang, how even the most intelligent of us can be caught up by “group think”.

Shortly after the death of Jesus of Nazareth, Claudius Galen took up a position as medical man to the gladiators, and came to the novel conclusion that it wasn’t mandatory for everyone to die if they got wounded. Instead of trusting their recovery to the whims of the gods as had been the norm, he knew there were plenty of things you could do to change the odds. He built up an extremely effective system of medical treatment that slashed the death rate. His predecessor lost 60 gladiators, Galen lost just 4.

So what he was doing worked, but he was also passionate about discovering just what life actually was. He got deeply into dissections so he could understand how things really worked, and he wrote over 300 books and pamphlets about his discoveries. It was an encyclopaedic piece of work and he became wealthy and hugely influential. That powerful influence extended for over 1500 years…

He became THE medical authority doctors referred to, which would have been fine if he’d been right about everything, but in fact he got an awful lot wrong. For instance, he thought that it was the liver that created the blood and pumped it around the body, and that the heart and brain added additional “spirits”, the essence of life, to the blood. Yet these kinds of errors weren’t discovered to be errors for hundreds of years because his work became a sort of medical gospel, and you don’t argue with gospels.

A good example of just how far people were prepared to go in order not to rock the boat was when medical students were watching a dissection. The teacher sat on a high chair, reading from Galen’s works, while his assistants did the actual chopping. So the professor might read out “So here’s the liver with its three lobes.” And the students all diligently wrote that down. What’s odd about that is that the liver clearly doesn’t have three lobes. It only has two. You can see that with your own eyes, just as they could, as could the professor. They simply chose not to see it. They preferred the certainty of Galen’s text to the evidence of their own senses. And this went on for hundreds of years, until they changed the style of teaching, in Italy during the Renaissance.

Now, you might be thinking “Yeah, but that was a long time ago! That sort of thing doesn’t happen now!” Well, Michael himself said that he could understand everyone going along with the “group think” because when he was a medical student in the recent past, the pressure to conform was enormous. And let’s face it, you have to pass your exams, and you’re not going to do that by contradicting the authoritative texts! (Even if you DO know the authoritative texts are wrong.)

Of course there are risks when you choose to question any established authority, and that’s one of the themes in my Dark Ages book, In Two Minds. Thomas is a modern day museum curator and therefore carries a lot of knowledge with him when his soul is carried twelve hundred years into the past. But knowing stuff is one thing, using it quite another, and he’ll have to take care when he does it.

Thank you for such an interesting guest post, K.T. I think we’re all guilty of a bit of wilful ignorance at times! K.T. Findlay lives on a small farm where he dovetails his writing with fighting the blackberry and convincing the quadbike that killing its rider isn’t a vital part of its job description.