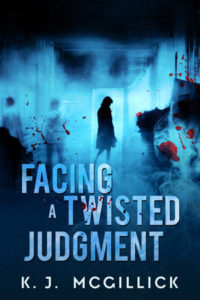 Posted on 1st December 2018 By Nicola

A little later in the day than I would have hoped, I’m here with a guest post by K.J. McGillick as part of the blog tour for Facing a Twisted Judgment. My thanks to Rachel Gilbey from Rachel’s Random Resources for the place on the tour.

What happens when tunnel vision clouds a police investigation? Is it true that once you are labeled a person of interest you really are the prime suspect? Can you trust the legal system?  Probably not.

After a bitterly contested legal battle over inherited property, the hard-won art collection and its owner Samantha Bennington disappear. Both have vanished without a trace.

When blood spatter is discovered under the freshly painted wall of the room in which two of the paintings were hung, the theft becomes the opening act in a twisted tale of jealousy, revenge, and murder leading to a final judgment for all involved.

As the list of suspects narrows, the focus lands squarely on the husband. Some labeled Samantha’s husband a corrupt attorney, others an opportunist. Either way, he’s in the crosshairs of law enforcement and they are calling him a murderer. But is he the only viable suspect? What about the missing woman’s drug-addicted sister and her convicted felon brother? Both were furious over their loss at court and have more than enough reason to hate Samantha.

Q: When you develop characters do you already know who they are before you begin writing or do you let them develop as you go?

A: For each book my characters developed differently.

My first book THREE I had a very strong idea of who I wanted my characters to be and how they would live their lives. The way I developed my characters in my first book was to fill out a five-page character analysis on each character including a Myers Brigg analysis. Once I had the shape of the characters’ personality I then trolled the internet for pictures of what each would look like.  Once I put a picture to the person, then I chose a name based on what I wanted that person to portray. The next step was to find places that represented the setting of the book and again that came from pictures on the internet, mostly real estate listings. When all of that was completed I story boarded everything and as I completed each chapter, I would place the poster board on the easel as inspiration.

I didn’t formulate my characters in my second book TWO until I wrote it and I wrote that book by the seat of my pants. The setting came easy because I have traveled to Paris many times and unlike a regular tourist I explored every corner of the city. The characters easily took form in my mind and I didn’t need a story board visualization. What challenged me in this book with my antagonist Adrien was the fact he was a doctor yet used his skills for evil. The challenge was making him human but with large flaws that were self-imposed. In this book I did not do any character analysis ahead of time nor any story boarding possibly because I felt each character on a visceral level in my mind when I started.

ONE was the last book in the series and as I was already acquainted with all the characters from the first and second book there really was no need for further character analysis for the heavy hitters in the book. The new characters I introduced sprung from my imagination as I developed the manuscript and refined them on paper. This book was the most difficult to write and without an outline I wrote the book three times in full, trashing the first two manuscripts until I accepted the third. So by the time I had finished the final version I was well acquainted with the characters.

The Last Lie She Told was born from a lunch conversation at a Japanese restaurant with a friend from a political science class. Our lunch conversation revolved around our previous jobs and low and behold a fascinating story emerged about a narcissistic student who had a volatile past that negatively impacted every person she met. When my friend told me there was no end to the story because she disappeared without a trace I decided to give my own an ending to the story. This book unlike my last two I used a 7 point plot wheel to develop the essential scenes and while doing that also sketched out my characters based on the theme of the book second chances and redemption.

Facing A Twisted Judgment character came to me at a local book signing. At the end of the Q&A someone asked about my next book and from out of nowhere came the statement “It’s about an ethically challenged gold digger lawyer.” In my mind he looked and acted like Don Johnson’s character in Guilty as Sin and thus he was formed in my mind.

I always have a picture of the character and their personality but don’t always know what decisions they will make until presented with problems.

Thank you so much, Kathleen. J. McGillick was born in New York and once she started to walk she never stopped running. But that’s what New Yorker’s do. Right?

As she evolved so did her career choices. After completing her graduate degree in nursing she spent many years in the university setting sharing the dreams of the enthusiastic nursing students she taught. After twenty rewarding years in the medical field she attended law school and has spent the last twenty-four years as an attorney helping people navigate the turbulent waters of the legal system. Not an easy feat. And now? Now she is sharing the characters she loves with readers hoping they are intrigued by her twisting and turning plots and entertained by her writing.