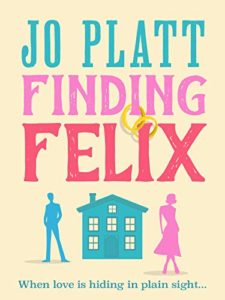 Posted on 2nd September 2018 By Nicola

Welcome to my stop on the blog tour for Finding Felix by Jo Platt. My thanks to Ellie Pilcher from Canelo for asking me to take part. I have a great and very useful guest post from Jo today about kick-starting your writing.

A family wedding. A fake boyfriend. A recipe for disaster! A funny, feel-good romantic comedy from bestseller Jo Platt

Singleton Dot Riley’s grandmother, Nanny Flo, is on her deathbed, surrounded by family and distraught at the thought of Dot being all alone in the world.  Desperate to make Flo’s final moments happy ones, Dot invents a boyfriend – plumping in panic for her childhood friend, Felix, a firm favourite of Flo, but whom Dot hasn’t actually seen for 15 years.

But when Flo makes an unexpected recovery a few weeks before a family wedding, Dot is faced with a dilemma.  Should she tell her frail grandmother that she lied and risk causing heartache and a relapse?  Or should she find Felix and take him to the wedding?

Dot opts for finding Felix.  But it’s not long before she discovers that finding him is the easy bit: liking him is the real challenge.

An uplifting romantic comedy about the angst of adult relationships and the joy of rediscovering the child within.  Finding Felix is perfect for fans of Anna Bell, Tracy Bloom and Debbie Viggiano.

Jo Platt offers a few pointers on kick-starting your writing.

You may think that this is the most daunting part of the process, but it really needn’t be.  Keep your eyes and ears open as even the simple or the everyday can form the basis for a book.  Finding Felix grew from a brief conversation between my sister and myself about the importance of timing in a relationship.  And my first novel, Reading Upside Down, was inspired by two things: an unfortunate lawnmower incident and a friend who grew a moustache for Movember. Neither of those things in themselves sound particularly inspirational, but when combined and built upon over a twelve-month period, they turned into a novel which proved to be the beginning of a new career.

You might even be the story yourself.  My third novel, You Are Loved, was about an author taking a break from writing, and desperate for more structure to her days.  Although the book is far from autobiographical, it wasn’t a stretch to write about the joys, as well as the frustrations, of being an author. Your personal story might not be a particularly dramatic one, and might even seem quite mundane to you, but to others, your experiences and perspective can provide new and refreshing insights, and I firmly believe we all have something interesting and unique to share.

I am the queen of procrastination and, before writing Reading Upside Down in 2012/13, my number one excuse for not getting started was that I simply didn’t have time to write a novel.  And although, as a mother with a part-time job, it was true that my days were pretty packed, I did manage to find opportunities to write, once I determinedly looked for them.  Sometimes that meant not closing my laptop until well after midnight, but I also tapped away while sitting in hairdressers’ chairs, waiting on train station platforms and, for two weeks in the summer of 2012, I scribbled madly on an increasingly soggy and sunscreen-smeared A4 pad on a windy beach.  It was a case of grasping every spare moment, of shunning television in favour of my laptop, of putting down my phone and picking up a pen, and of setting everyone else’s books to one side and getting on with writing my own.

I don’t think of myself as a particularly brave person, but there’s no doubt that writing with a view to sharing your work takes guts of a sort.  My fear of being judged for even thinking of writing a novel was huge – so much so that I told no one other than my husband.  I was worried that a general declaration of my ambition to write a book, might result in eye-rolling, increased pressure and, worst of all, pity.  And whenever I allowed myself to think about the remote possibility of publication, I feared the additional judgement of the reader – both of the story and of what they might assume about me as a person.

I guess my point is, if someone as neurotic and riddled with self-doubt as myself can manage to scrape together the confidence to have a go at writing and publishing a story, then there’s hope for everyone.

Having rambled on about neuroses and self-doubt, I don’t want you thinking that I spend my days as an author crouched and sobbing in a corner.  Far from it.  Because although it was a struggle, when I finally found the story, the time and the confidence to start writing in 2012, I loved every moment of it – and I still do.

Thanks so much, Jo, for such an interesting and helpful post. Jo Platt was born in Liverpool in 1968 and, via the extremely winding route of rural Wiltshire, London, Seattle and St Albans, she is now happily settled in Bristol with her husband and two daughters. She studied English at King’s College London before going on to work in the City for ten years. In 2000 she escaped into motherhood and part-time employment, first as an assistant teacher in a Seattle pre-school and then was a Bristol-based secretary to her husband.