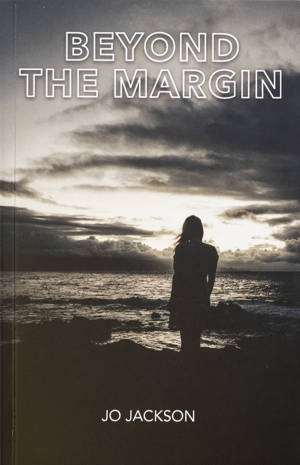 Posted on 3rd February 2020 By Nicola

I’m delighted to welcome Jo Jackson to Short Book and Scribes today with a guest post about writing. There’s also a chance to win signed copies of Beyond the Margin and Too Loud a Silence. My thanks to Rachel Gilbey of Rachel’s Random Resources for the place on the tour.

Is living on the edge of society a choice? Or is choice a luxury of the fortunate?

Joe, fighting drug addiction, runs until the sea halts his progress. His is a faltering search for meaningful relationships.

‘Let luck be a friend’, Nuala is told but it had never felt that way. Abandoned at five years old survival means learning not to care. Her only hope is to take control of her own destiny.

The intertwining of their lives makes a compelling story of darkness and light, trauma, loss and second chances.

My thoughts about writing by Jo Jackson

I didn’t start writing seriously until I retired. I was spurred on by joining a writing group. They are both my greatest supporters and my fiercest critics. Each session I would read out a chapter and where it was good, they would tell me and where it didn’t work, they would explain why. As an author you are so close to your writing and you know your characters so well you fill in all the blanks.  Guaranteed if your pre-readers don’t get it then neither will your wider audience. It is safe to say that without them my books may never have been written.

The joy of retirement is you can do all the things you love doing most; my writing sits amongst painting, gardening, walking, philosophy and a host of other interests. Fortunately my most creative time is early morning and I often see the dawn break. I can write for two or three hours before breakfast without it interfering with the rest of the day.

I don’t have a strict writing schedule or a particular place where I like to write. I write if I want to – I find once the characters take charge I want to keep writing regularly. If it’s early morning, I write in the conservatory where I can hear the birds and watch their antics. If it’s hot and sunny I have a special place beside a large wildlife pond in the garden. Then it’s just me and the moorhen or the mallards and their chicks. Often, I will be so engrossed in the place I’m writing about that I will look up and be surprised to find myself in a country garden. Cold winter days will see me with the laptop on my knee in front of the log burner. It is good to be able to write anywhere the mood takes me.

My books are only ever loosely planned. Mostly I think about the plot when I’m walking the dog. We walk in wild places, amongst nature, which is why I think the sky, the trees and the landscape form important backdrops to my stories. I will start off with an idea then trust that my characters are going to take me to the place they want me to go. Sometimes that process feels a bit scary, but it works for me. It doesn’t obviate the need for research, but it does mean the research runs alongside my writing and is often as and when necessary. It is easy to become distracted and too interested in what I am studying. The discipline is to extract what is needed and to hold the rest in your head.

My writing is always a blend of fact and fiction. My first book Too Loud a Silence was set in Egypt against the political turmoil of the Arab Spring. The events that took place were real events inhabited by my fictional characters. The backstory was a weave of situations I’d encountered when living in the country in the 1980’s. Often it is small things like the way someone looks or a mannerism or it may be something bigger like the assassination of the president. My second book Beyond the Margin is an amalgam of people I have known in the course of my career as a psychotherapist and of the stories I have been privileged to listen to. When I first began to write it, I had no intention of Joe having his own story. But he wanted it to be told and in fact it was his I wrote first.

My book has been described as harrowing, usually by readers who have no first-hand experience of being amongst vulnerable and marginalised individuals and authentic by those who have. I hope Nuala and Joe’s story is an insight into troubled lives and the extraordinary courage and determination that can often be found. I dedicated the book to all the people who work to make the lives of children better because so often, when things go wrong, it is those who care who get the blame. They deserve recognition and thanks for the immensely difficult job they do.

For a different blog I was recalling the books that I have loved. I think it’s no coincidence that many of them are set amongst cultures that are different from our own. I love to travel, the more unusual the place the better.  India and Africa are favourites. I find people’s lives are so rich, their countries colourful and interesting. There is happiness and sadness, horror and rebirth all around us. For me capturing a sense of place or a way of being in a book gives it authenticity and should transport the reader even if it’s a place they’ve never been to or a way of life they’ve never encountered. I believe difference is to be celebrated not feared. The greatest compliment would be to know my writing reflects that.

Thank you so much, Jo. I love the sound of your wildlife pond!

Giveaway to Win signed copies of Beyond the Margin and

Too Loud a Silence by Jo Jackson. (UK only) Jo Jackson reads books and writes them too.

Having worked with some of the most vulnerable people in society she has a unique voice apparent in her second novel Beyond the Margin.

She was a nurse, midwife and family psychotherapist and now lives in rural Shropshire with her husband. She loves travelling and walking as well as gardening, philosophy and art.

Her first novel Too Loud a Silence is set in Egypt where Jo lived for a few years with her husband and three children. Events there were the inspiration for her book which she describes as ‘a story she had to write’.