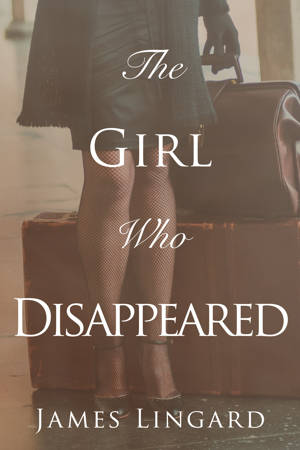 Welcome to my stop on the blog tour for The Girl Who Disappeared by James Lingard. I’m sharing a post by the author today all about his five favourite things about his main protagonist. My thanks to Faye Rogers of Authoright/Clink Street Publishing for the place on the tour.

Title: The Girl Who Disappeared

Emily falls passionately in love with working class Walter, despite fierce opposition from her class conscious father. She sees marriage as a partnership of equals and resolves to elope to escape such a male dominated society.

Emily’s actions will see her struggle to survive the subsequent devastation brought about by the war, as she and her four year old son are thrown into the midst of danger and death. The family experience rationing and the terror of bombing. Their air raid shelter is destroyed by a direct hit.

When Walter volunteers for the army, Emily and her son are evacuated to a rat infested cottage in a farming community near Hebden Bridge. The war changes Walter into an efficient army officer who demands to be obeyed. Emily worries that she might have a rival for his affections. How can she restore their loving relationship?

The Girl Who Disappeared is a moving love story about one woman’s enduring resilience, a story full of quiet humour and surprising twists and turns.

Emily is closely based on my mother in real life, though details of events pre-war are of necessity fiction being before I was born. The five favourite qualities about her are

It is a fact that she fell out with her parents and eloped in defiance of their wishes, immediately sailing to America with my father who had won a Fulbright scholarship. It took courage to stand up to her middle class father who had a propensity to violence and expected her to marry someone of her own social standing. Moreover, she accepted an invitation to ride on the back of a motorbike with a young man she hardly knew but instinctively trusted and subsequently eloped with him to America where she knew no one.

When war broke out, Emily did not collapse in floods of tears like one of her Jewish friends but did all she could to prepare for the food and other shortages which would inevitably occur. When bombed out, she evacuated to Yorkshire and lived for months in a rat infested farm cottage as a single mother with a small child rather than seek a reconciliation with her parents.

Her decision to sail to the Isle of Man in the middle of the war to visit my father who was on leave required considerable courage as did her subsequent decision to stay in Manchester when the bombing of that city resumed towards the end of the war.

Emily remained loyal to her husband throughout her life and was deeply in love with him. This loyalty was such that during the air-raid in Bournemouth she stayed in the bedroom with him despite common sense telling her to join the other guests in the shelter.

In 1930s Halifax, women were expected to obey their husbands and stay at home doing all the housework and looking after the children. Moreover prior to marriage, their father ruled the household and would decide which boyfriends were suitable for them to marry.

Emily never became a suffragette but she admired them and vowed to choose her own husband from the few men who were sufficiently enlightened to treat her as an equal. Walter qualified because his own father was a trade union leader and he and his family regarded her as a princess. She did vow to obey him in the marriage ceremony, a risk she decided to take because she had fallen deeply in love with him. However, she struggled on to be treated as his equal and achieved this in the early years of her marriage.

When her husband joined the army and was made an officer, he became accustomed to giving commands and being obeyed. This trait continued for a time after he was demobbed and Emily had to stand up for herself. She succeeded in being treated as an equal after a few difficult months because equality mattered to her.

Emily was physically attractive and had a pleasant disposition which helped her to make friends easily, particularly on her return from America. It also helped to persuade her husband to respect her wishes.

A reviewer has said: ‘I liked the way Emily changed due to the circumstances and how she stood strong and endured a rough situation. I found her a bit spoiled at the beginning but she matured by the end of the story.’

When war came, Emily vowed to protect her young son whatever the cost. When the damaged German bomber flew over their heads near Petts Wood at treetop height, she lay on top of her four year old son shielding him with her body. Similarly, when on Bournemouth beach he waved cheerily to the pilot of the German spotter plane who waved back, she protected him from the hostile crowd who regarded them as German sympathisers.

Thank you, James. Emily sounds like quite a woman! He is the original author of Lingard’s Bank Security Documents (LexisNexis Butterworths) now in its 7th edition and a number of other legal books. More recently, he has written Britain at War 1939 to 1945 (Author House) and now THE GIRL WHO DISAPPEARED.