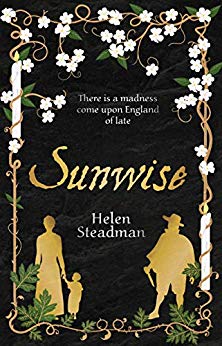 I’m delighted to be taking part in the blog tour for Sunwise by Helen Steadman today. I really want to read the book and do have a copy but couldn’t fit it in in time for the tour. I also realised that it’s a sequel to Widdershins and I do like to read in order. My thanks to Lisa from Impress Books for the place on the blog tour and for very kindly sending me review copies of both books. Sunwise really caught my eye because of the fact that it features corn dollies and so I’m particularly pleased to have a guest post by Helen about that very subject to share with you today.

When Jane’s lover, Tom, returns from the navy to find her unhappily married to his betrayer, Jane is caught in an impossible situation. Still reeling from the loss of her mother at the hands of the witch-finder John Sharpe, Jane has no choice but to continue her dangerous work as a healer while keeping her young daughter safe.
But, as Tom searches for a way for him and Jane to be together, the witch-finder is still at large. Filled with vengeance, John will stop at nothing in his quest to rid England of the scourge of witchcraft.
Inspired by true events, Sunwise tells the story of one woman’s struggle for survival in a hostile and superstitious world.

Corn dollies and the folklore surrounding them feature in Sunwise, which, like Widdershins, is steeped in pre-Christian customs and beliefs. (In this context, corn refers to all grains and the word dolly may stem from the word idol: an object of worship.)

There is lots of fascinating lore from around the world connected with corn. For instance, Pagans believe that the spirit of the grain lives in the crops and great care must be taken during harvest in case the spirit is offended, injured or made homeless. As the corn is reaped, the spirit keeps moving to find shelter and eventually takes sanctuary in the final sheaf. This is then turned into a corn dolly, which is decorated with ribbons, dresses and crowns. Names for these corn idols vary from place to place, and they may be known as Mother of the Wheat, Corn Mother or Old Woman; in the north east of England, they were known as the Kern Baby. The dollies are often used in harvest rituals, such as dances, ceremonial burnings and chants. They’re also very popular in fortune-telling customs – especially for seeing who will be married next. Sometimes, the dollies are kept till the following spring and the grain is scattered to ensure that the spirit returns to the field to guarantee a good harvest. Other customs surrounding corn include fertility rites, such as people having sex in the fields at Beltane in early May to encourage a healthy crop. (This particular rite takes place in Widdershins!) When working on a new book, I’m always keen to carry out practical research as a form of ‘method’ writing. So, when I realised that corn dollies were going to feature in Sunwise, I decided to make some of my own. I remembered making them from rushes on childhood walks, so could recall the basics, and a friend who is a farmer generously gave me a sheaf of twin-row barley so I could practise. I had plenty of corn left over after practising, so I decided to make a batch of countryman’s favours as I thought these might be nice to send out alongside review copies to book bloggers. And Impress Books put my handiwork to good use by creating an amazing cover reveal video with the corn dollies dancing widdershins around my books.

There’s some lovely lore that goes alongside countryman’s favours: give one to your love and if they’re wearing it over their heart the next time you meet, your love is returned. (I’ll have to ask the book bloggers whether this charm worked for any of them!)

For people who want to make corn dollies but don’t know any friendly farmers, a good place to start is the Guild of Straw Craftsmen, which lists suppliers and makers (including women). The website also lists courses around the country and provides lots of useful tips as well as corn dolly projects that range from fairly easy through to rocket science!

Thank you, Helen, for such an interesting post. I had no idea you had made the corn dollies I received with my book – they’re fabulous!