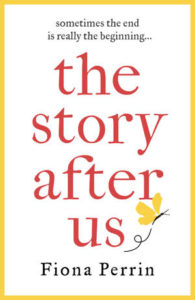 ShortBookandScribes #BlogTour #GuestPost by Fiona Perrin, Author of The Story After Us @fionaperrin @aria_fiction

I’m so pleased to be taking part in the blog tour for The Story After Us by Fiona Perrin today. I have a fab guest post by Fiona to share with you today. I’d like to thank Melanie Price from Aria for the place on the tour.

Perfect for fans of Marin Keyes and Motherland – and for all women who have found their happy-ever-after turned out to be no fairy tale. Grown-up, sparkling, funny, poignant and ultimately uplifting.

If she tries very hard, Ami can remember when she used to have a dynamic and exciting career and a husband who she loved more than life itself, and who was equally smitten with her…

Now she has two children, a terrifyingly large mortgage, and no idea who she has become – or why she and her husband can’t even be in the same room anymore.

With life as she knew it in tatters around her, Ami is heartbroken, and in no way pulling off ‘consciously uncoupling’ like a celeb. But she’s starting to wonder if she just might come out the other side and be….happier?

As funny as Helen Fielding, as poignantly touching as Marian Keyes, Fiona Perrin’s dazzling debut is a story that is as much about finding out who you really are again, as it is about the exhausting balancing act of motherhood. Unmissable for women everywhere.

And it’s a great question.

Ami, my heroine, is potentially getting divorced from Lars, the man she had dreamed of a future with – the father of their two children. She’s heartbroken and in no way pulling off ‘consciously uncoupling’ like a celeb. At the same time, she has a massive mortgage, a career in tatters and two kids to protect. She and Lars have some big painful choices to make. But out the other side, there’s humour and lots of hope.

The truth is I am divorced and I’m happily married to my second husband, Alan, whilst being pretty good friends with my first, David. I am a mother and a stepmother (four teenagers, yup, four of them) and I have had a fairly full-on career while all this has been going down. This is what made me want to write about messy, modern love, new-shaped families and women’s right to champion the best version of themselves.

But Elyse and Sienna, my two girls with David, have a joke about him at the moment: ‘Dad, mum’s book isn’t about you’. (He’s even got the Scouting for Girls song on his phone). And it is another couple’s story, but I wanted it to be for every woman whose family doesn’t conform to the perfect media ideal or look like it belongs in a magazine spread – but who still are surrounded by love and laughter.

There are loads of us – we believed in happy ever after, but then found out that the fairy tale had a sequel. And some of us faced into irreconcilable differences and survived.

David and I had a fantastically acrimonious divorce more than 15 years ago now – court cases, stalking, vast amounts of money we didn’t have spent on lawyers. But this summer he is getting married to lovely Octavia and we are all really looking forward to the wedding party.

In the meantime, I got married again, to Alan, 8 years ago. David and I have raised our two daughters between us – and we’ve managed somehow to be the sort of freak family that can go out together for a kid’s birthday lunch or turn up at parents evening without killing each other. We’re not all going to go on a round-the-world bonding trip together, but when we are in the same place, we have a laugh.

In fact, David and I get on very well now we’re no longer married. And because we know each other so well, we’re not bad at giving each other advice.

The kids are particularly fond, now they’re older, of stories about their confusing, divorced parents – especially the one where their teacher described them as ‘remarkably balanced for children of divorce’. Or the one where, as a single parent, on holiday with two girls, I was continually asked if I wanted a table for four (this does appear in my book). Or the one where my neighbour informed me that she’d just seen ‘both my husbands’ coming out of the pub together.

We’re not Gwyneth and Chris, or any of the other celebs, papped having brunch in a post-divorce civilised way.  None of us have been perfect (except Octavia) but, in the end, through all the drama of bringing up children, we’ve tried quite hard to make it work for them. And in the end, it worked for all of us.

I found myself getting very unconsciously uncoupled with two small kids. It was awful while it was happening, but many women fix their marriages or find a new future – and are happy again.

In the book, that was the option I wanted Ami to answer for herself – when love leaves, how hard should you chase it?

In the end then, The Story After Us is my story, but I hope it’s a real story for many other women too. Fiona Perrin was a journalist and copywriter before building a career as a sales and marketing director in industry. Having always written, she completed the Curtis Brown Creative Writing course before writing The Story After Us. Fiona grew up in Cornwall, hung out for a long time in London and then Hertfordshire, and now writes as often as possible from her study overlooking the sea at the end of The Lizard peninsula.