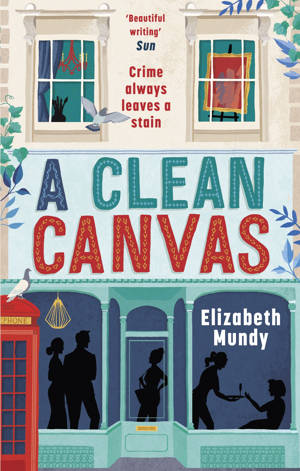 I’m so pleased to be taking part in the blog tour for A Clean Canvas by Elizabeth Mundy today. I have a guest post by Elizabeth to share with you along with a giveaway to win a watercolour set and a signed copy of the book. My thanks to Rachel Gilbey from Rachel’s Random Resources for the place on the tour.

Lena Szarka, a Hungarian cleaner, dusts off her detective skills when a masterpiece is stolen from a gallery she cleans with her cousin Sarika.  When Sarika goes missing too, accusations start to fly.

Convinced her cousin is innocent, Lena sweeps her way through the secrets of the London art scene. But with the evidence against Sarika mounting and the police on her trail, Lena needs to track down the missing painting if she is to clear her cousin.

Embroiling herself in the sketchy world of thwarted talents, unpaid debts and elegant fraudsters, Lena finds that there’s more to this gallery than meets the eye.

My Lena Szarka mystery series features a Hungarian cleaner as detective. That might seem an odd choice, but for me it makes perfect sense. Inspiration struck the first time I visited the flat of my, until then, rather promising new boyfriend. He seemed lovely: funny, successful and very sweet. He seemed sorted: he had a good job, wore a nice to suit to work and bubbled over with confidence. Then I saw his flat.

There were half-eaten, mouldy pieces of toast under his bed and cold cups of tea used as ashtrays littering the living room. I don’t think he’d ever done a load of laundry. Dirty boxers and filthy socks were piled high on the bathroom floor – I had to clamber over them to use the toilet.

He was embarrassed at my horror and hired a cleaner the next day. It struck me that this employee, who he’d hardly ever meet, would know more about his private life than any of his colleagues. The cleaner would be the one to uncover his dirty secrets. That’s when I decided a cleaner would be a great, if unconventional, detective.

But there’s more to cleaners than cleaning. Many of them are immigrants to this country. Outsiders looking in. My detective, Lena Szarka, is a cleaner in London, but I chose to make her Hungarian: my own great grandmother Magdaléna emigrated from Hungary to America just before the First World War. Magdaléna was an early economic migrant: she’d been told that in the States the streets are paved with gold. She ended up in Indiana, raising her six children in a house with a dirt floor.

Magdaléna inspired Lena: her heritage, her recipes, but also her willingness to uproot everything in the hope of discovering a better life. Cleaners I’ve interviewed have had more prestigious jobs back home: nurses, teachers, insurance brokers. But in their native countries it was hard to make ends meet, let alone ever hope to buy a house. Leaving everything they knew to come to the UK meant that they had a chance for a better future.

I feel sorry for the cleaner who landed the job with that messy boyfriend of mine. I’m sure it’s not what she had in mind when she came to the UK, full of hopes of a new life and fresh start. But she’s done us both a favour: she not only inspired my new crime series, but she also meant that I eventually made that boyfriend my husband and now we have two very messy children.

I got the idea for my second novel,  A CLEAN CANVAS from a children’s book, The Usborne Guide to Detective Fiction. I read that forged paintings could be identified by the type of dust in the cracks of the canvas, and immediately I thought that my cleaning detective Lena would have exactly the eye for detail needed to investigate an art crime. The same book also advises detectives to look out for unusual facial features on suspects that they can’t disguise, such as large earlobes. So if you come across any characters with funny shaped ears in my books, you can be pretty sure they are the murderer!

I love this, thank you Elizabeth. The idea of a crime detecting cleaner is brilliant and I absolutely love the fact that you married that messy boyfriend!

Giveaway to Win a Winsor & Newton pocket sized Watercolour set and a signed copy of A Clean Canvas. UK Only Elizabeth Mundy’s grandmother was a Hungarian immigrant to America who raised five children on a chicken farm in Indiana. An English Literature graduate from Edinburgh University, Elizabeth is a marketing director for an investment firm and lives in London with her messy husband and two young children. A Clean Canvas is the second book in the Lena Szarka mystery series about a Hungarian cleaner who turns detective.