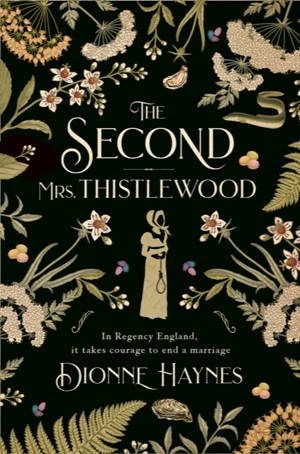 It’s my stop on the blog tour today for The Second Mrs Thistlewood by Dionne Haynes. Isn’t that cover a beauty? I have a brilliant guest post to share with you – ‘Sugar Plums and Jellied Eels’! My thanks to Rachel Gilbey of Rachel’s Random Resources for the place on the tour.

Regency England. A land of oppression and social discontent.

Battered and bruised by her violent husband, Susan finds comfort in food and books. As Arthur’s legal property, leaving the marriage seems an impossible dream — until a chance encounter with a charismatic Bow Street Runner. In the sanctuary of an inconspicuous London bookshop, the Runner’s easy manner and unexpected generosity compel Susan to pursue a life without her husband.

But will the Bow Street officer provide a key to Susan’s freedom? Or will he place her in the greatest danger of all?

Inspired by true events from the Cato Street Conspiracy of 1820, this is a tale of courage, determination, and love.

I know, it’s a strange combination! One of my greatest joys while researching The Second Mrs Thistlewood was reading about food during the Regency Era. Some foods on offer that made my mouth water are still served today – syllabub, blackberry trifle, cherry pies and stews cooked in rich red wine gravies. Others made me pull funny faces, jellied eels being one of them.

Sugar plums feature more than once in my novel. In fact, those two words start the story. Susan Thistlewood adores them and keeps them hidden from her husband, sneaking one or two behind his back. Arthur Thistlewood disapproves – these treats are expensive, and he considers them inappropriate while the working classes struggle to earn a decent wage and feed their children. Arthur Thistlewood is a man on a political crusade, difficult to live with and violent. Susan is trapped in a loveless marriage and therefore seeks comfort from food. Every chapter features a food, either to set the scene or reflect the atmosphere. Here are three examples of food opening a chapter:

‘I force myself to swallow a spoonful of chicken broth, though I have no appetite.’

‘Settled at the back of the courtroom, I chew a dried apricot.’

‘The bread tilts and flops from the fork, landing between flames and settling on the dusty coals.’

So, back to sugar plums. What were they? They were not plums coated in sugar, although they often comprised small pieces of dried fruit, nuts or spices coated in a hard, sweet shell. In England, from the Georgian era onwards, they were comparable to modern day sugared almonds, the smooth ovals available in a variety of colours.

The term ‘sugar plums’ originated during the early seventeenth century and described a style of comfit (sweet or candy), created by adding layers of sugar syrup over caraway seeds or cinnamon. It was a long, laborious process carried out by a confectioner or their apprentice. Although confectioners made a crystallised sugar coating for plum fruits, these items were not called sugar plums.

These days, it’s common for the modern-day version (sugared almonds) to appear as pretty wedding favours wrapped in fine netting and tied with a ribbon.

Jellied eels, adored by so many people, are (in my opinion) a far less appetising option, and not as attractive. This traditional English dish originated towards the end of the eighteenth century in the East End of London. The recipe is much the same today as it was in the Regency era with eel meat boiled in a stock made from water, vinegar, lemon and spices. When the liquid cools, it forms a jelly and the resulting dish is eaten cold. The eel meat has a soft texture and a mild, salty taste. With this originating as an East End dish, you would think the eels came from the Thames, but in the eighteenth century the Thames was heavily polluted, and the eels therefore travelled to London by barge from Holland.

This old-fashioned dish has enjoyed a resurgence in recent times. It’s a healthy offering rich in valuable nutrients including omega-3 fatty acids, Vitamin B12 and Vitamin A. The jelly contains collagen, an important protein found in bones and skin. Whilst I acknowledge these valuable health benefits, I confess I’m not tempted – but I’ll happily accept a sugared almond any day!

Thank you, Dionne. I love books where food is a feature. I’ve never really considered what sugar plums are so that was really interesting to read about, and I also am not in the slightest bit tempted to try jellied eels. Dionne is a retired doctor, living in Plymouth with her husband. She has a passion for history, the great outdoors, good food and life in general. With her medical career now well behind her, she is enjoying a second career as an author.

In 2015, Dionne finished writing her first novel The Provenance of Lilly, but after careful reflection and consideration of some harsh criticism, she decided not to put it into print. Instead, she worked hard at honing her writing skills, and published her debut novel, Running With The Wind, in 2019. She is currently working on a sequel which will form Book One of The Trelawney Wives series.

Dionne graduated from St George’s Hospital Medical School in 1992, and started her medical career in the Royal Air Force. In 1998, she left the military to have her son, and worked in General Practice and Occupational Medicine. The opportunity to retire came in 2014 and Dionne did not hesitate to take it, relishing the opportunity to delve into history books and begin her writing career. Although no longer practising medicine, her medical background has some influence in the plotting of her stories.

While keen to maintain historical accuracy in her writing, Dionne creates stories from real events with sparse recorded details, allowing her imagination to take over and tell a tale of what may have occurred.