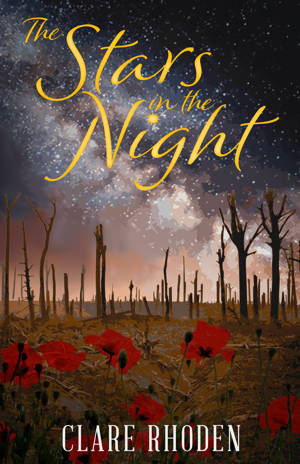 ShortBookandScribes #BlogTour #GuestPost by Clare Rhoden, Author of The Stars in the Night @ClareER @rararesources #giveaway

I’m delighted to be sharing a guest post by Clare Rhoden today as part of the blog tour for The Stars in the Night. There’s also a giveaway to win a signed copy of the book together with a poppy brooch and a cross-stitch poppy card. My thanks to Rachel Gilbey from Rachel’s Random Resources for the place on the tour.

“Harry Fletcher is a confident young man, sure that he will marry Nora, no matter what their families say. He will always protect Eddie, the boy his father saved from the gutters of Port Adelaide.

From the beaches of Semaphore to the shores of Gallipoli, the mud of Flanders to the red dust of inland South Australia, this is a story of love, brotherhood, and resilience.”

Thank you so much for having me. The Stars in the Night is my third novel and my first historical fiction. Today I’m going to talk about trying to recreate historical settings.

The Great War – the War to End all Wars – that was how World War One was known at the time. Only twenty years later it became the First World War, or WWI.

I’m reminded of the 2017 Dr Who Christmas Special, Twice Upon a Time – bear with me! One of the characters involved in the time-warped plot is the Captain, ghosted out of the trenches to the Tenth Planet. One of the Doctors remarks ‘oh, a First World War uniform’, causing the Captain to stagger and stare: ‘First?!’ The Doctor apologies for the “spoiler”.

We now know that WWI marked the beginning of a very violent century. There has not been a single day of complete world peace in all the years since. The idea of making war in order to end all wars just hasn’t worked.

To write my novel, I had to believe in the war’s purpose as well, at least for long enough to get my Australian volunteers into the army and overseas. Harry enlists mainly to get away from the stifling responsibilities he has taken on as the oldest son of a widowed Irish mother. He craves adventure and travel, and is attracted by the very generous pay (Australians were paid six shillings a day, English soldiers one shilling). The war is his great chance to do something special with his life. He doesn’t stop to question whether going to war is a sensible response to Kaiser Wilhelm’s aggression, because Harry is a man of his time. He believes in the British Empire and saving Belgium, in stopping the bully and standing up for what is right.

The Australians went first to Egypt, via a six-week voyage that took them well out of their ordinary experiences. The Egypt of the time, a British protectorate, was quite alien and exotic to them. From there, the Australians and their allies journeyed back and forth from Cairo to Gallipoli and its desolate, dangerous beaches. The Gallipoli plan was abandoned after seven costly months, and many of the troops were sent to the Western Front.

Here is another strange landscape for my Australians. On a recent visit to France, I was struck by the plentiful reminders of the Great War, and especially by the reverence that the French seem to feel for the Australian troops. Of course, that landscape has since been fought over again in a world war, and it’s a bit of a reminder that war has been waged for centuries.

But my story doesn’t just cover the war years. The start of the twentieth century was a time of enormous change, and I tried to convey that as well. Between the 1880s and the 1930s, we saw the end of the horse age – the birth and growth of the motor car – candles and lamps and even gas lights changing to electricity – telegrams, and then phone lines becoming more common in homes – women entering the workforce in a range of roles – hemlines rising – women gaining the vote – advances in medicine and engineering, transport and communication.

My story starts and finishes with scenes from 1970, so that my characters can also look back with a bit more knowledge of later events. Of course, like all of us, they are more concerned with the effects of history on their own family than with the wider scope of world events. I have tried to keep every part of the story consistent with the time when it is set, and I’m very grateful for many of the resources available in public libraries, through online records such as Trove (the Australian database of newspapers), and the advice of historians.

Most of all, though, I wanted to tell a story of people who lived in those times. I hope you enjoy reading it as much as I enjoyed writing it.

Thank you so much for having me!

Thank you, Clare. It sounds like a fascinating and fabulous read.

Giveaway to Win a signed copy of The Stars in the Night, a metal poppy brooch made by a Melbourne craftswoman, and a cross-stitch poppy card. (Open Internationally) Clare completed her PhD in Australian WWI literature at the University of Melbourne in 2011, and a Masters of Creative Writing in 2008, in which she investigated the history of her grandparents who emigrated for Europe to Port Adelaide in January 1914. The Stars in the Night is the result of her research.