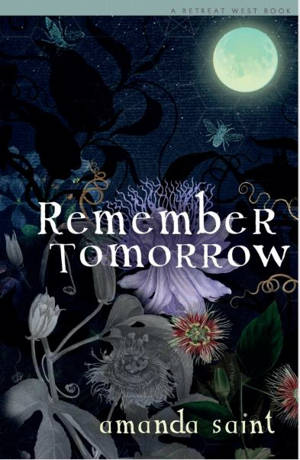 Welcome to my stop on the blog tour for Remember Tomorrow by Amanda Saint. Amanda’s kindly written a guest post about her top three post-apocalyptic novels for me to share with you today. My thanks to Anne Cater for the place on the tour.

England, 2073. The UK has been cut off from the rest of the world and ravaged by environmental disasters. Small pockets of survivors live in isolated communities with no electricity, communications or transportation, eating only what they can hunt and grow.

Evie is a herbalist, living in a future that’s more like the past, and she’s fighting for her life. The young people of this post-apocalyptic world have cobbled together a new religion, based on medieval superstitions, and they are convinced she’s a witch. Their leader? Evie’s own grandson.

Weaving between Evie’s futurist world and her activist past, her tumultuous relationships and the terrifying events that led to the demise of civilised life, Remember Tomorrow is a beautifully written, disturbing and deeply moving portrait of an all-too-possible dystopian world, with a chilling warning at its heart.

Ever since I was young, I have loved reading dystopian and post-apocalyptic novels and knew once I started writing fiction again in my thirties that it wouldn’t be long before I wrote my own. Remember Tomorrow grew from the idea of a woman in the future being persecuted for witchcraft but it took a while for me to realise how she had ended up in a future more like the past. My vision has been influenced by my job as a freelance environmental journalist, in which I have been writing about climate change and sustainability for almost twenty years.

These are the three post-apocalyptic novels that I love the best for their characters, setting, and different visions of how the world as we know it may end and what will come next. What they all have in common, is a theme of good versus evil, or sane versus mad, and they are all horrifyingly credible ideas of how civilization could vanish.

The Stand by Stephen King

I first read this when I was a teenager and have read it many times since. The story of a virus wiping out America after being accidentally released from a military research base. At over 800 pages it’s an epic, told from multiple points of view as the good are all drawn to one location and the evil to another. What I love most about this book is that although it’s already in a post-apocalyptic setting, the whole storyline is heading towards another apocalypse. Why have one if you can have two?! And that it showed how humans just keep on making the same mistakes.

Oryx and Crake by Margaret Atwood

Set in an unspecified date in the future, this is a mystery and a love story as well as post-apocalyptic. We have no idea how the world ended up like this when we meet the narrator, Jimmy, who lives in a tree mourning for his lost love, searching for any leftover booze, and being visited by blue people who bring him a fish once a week. As Jimmy tries to make his current day a little more comfortable, his memories slowly reveal the truth of what came before. I love the world created both before and after the apocalypse and how it feels like it could well be where civilization is heading.

A flu virus wipes out 99% of the global population and we get to know the characters in both the world before and the aftermath. Kirsten was a child actor before the virus struck and in the post-apocalyptic world, twenty years later, is part of a troupe of actors travelling between the disparate communities left in the Great Lakes region of North America. How the stories of the past intertwine with Kirsten in the future is brilliantly done and themes of nostalgia, memory and yearning make it so much more than a disaster novel.

Thanks so much, Amanda. Amanda Saint’s debut novel, As If I Were A River, reached #3 in the WHSmith Travel charts; was selected as a NetGalley Top 10 Book of the Month; and chosen as a Top 20 Book of 2016 by the Book Magnet Blog. Her short stories have been widely published in anthologies and literary magazines, twice appearing on the Fish Flash Fiction longlist and the Ink Tears Short Story shortlist. She runs her own creative writing business, Retreat West, through which she runs writing courses and competitions; and an independent publishing house, Retreat West Books. Amanda also works as a freelance journalist writing about climate change and environmental sustainability.