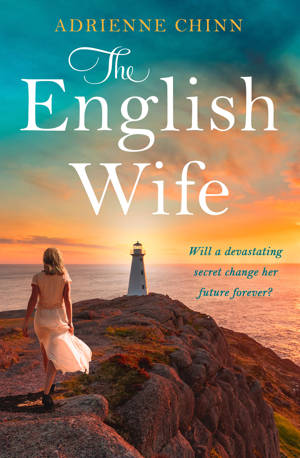 Welcome to my stop on the blog tour for The English Wife by Adrienne Chinn. I have a guest post by the author about the magic of Newfoundland to share with you today. My thanks to Rachel Gilbey from Rachel’s Random Resources for the place on the tour.

A secret waiting to be discovered…

VE Day 1945: As victory bells ring out across the country, war bride Ellie Burgess’ happiness is overshadowed by grief. Her charismatic Newfoundlander husband Thomas is still missing in action.

Until a letter arrives explaining Thomas is back at home on the other side of the Atlantic recovering from his injuries.

Travelling to a distant country to live with a man she barely knows is the bravest thing Ellie has ever had to do. But nothing can prepare her for the harsh realities of her new home…

September 11th 2001: Sophie Parry is on a plane to New York on the most tragic day in the city’s history. While the world watches the news in horror, Sophie’s flight is rerouted to a tiny town in Newfoundland and she is forced to seek refuge with her estranged aunt Ellie.

Determined to discover what it was that forced her family apart all those years ago, newfound secrets may change her life forever…

This is a timeless story of love, sacrifice and resilience perfect for fans of Lorna Cook and Gill Paul.

The Magic of Newfoundland by Adrienne Chinn

I’m a true Sagittarian. I love to travel, and, until the recent lockdown, usually had an airplane ticket waiting on my work table in easy view. For the time being, my travel has become virtual, so, more than ever, I reach for novels that are set in locations where I can experience life in places I have yet to visit, or revisit places that I love.

In The English Wife, my birthplace of the remote and ruggedly beautiful island of Newfoundland, a place roughly the size of Ireland sitting in the cold, grey North Atlantic off the coast of Canada, inspired one of the settings in this timeslip novel. Newfoundland & Labrador (located on the Canadian mainland) is now one of ten Canadian provinces, but Newfoundland was a Dominion of Great Britain until 1949, with its own money, educational system, government and army. So, when Britain went to war with Germany in 1939, Newfoundland joined up, along with the five other British dominions – Australia, New Zealand, South Africa, Canada and the Irish Free State. Newfoundlanders are a tough, kind-hearted, spirited, humorous, hard-working and creative lot. Kitchen “times” – impromptu kitchen parties are a regular occurrence, where people bring out their fiddles, accordions, spoons, and Ugly Sticks (yes, there is such a thing!), and sing, make music and tell yarns. I’ve never met a Newfoundlander who can’t spin a story!

When I was researching The English Wife, I spent a month in the spring of 2019 travelling around Newfoundland, visiting relatives and exploring the northern coast for inspiration for the fictional outport village of Tippy’s Tickle. It was iceberg season (May-June), and I could see immense bergs the size of ships, that had broken off the glaciers of Greenland, sailing by the coast. The sea around the island is also a popular feeding ground for whales, and I loved to scan the ocean for their spouts as I drove along the deserted coastal roads. But, watch out for moose – there are plenty of those around, too! If you’re inspired to visit Newfoundland once travel has opened up again, take a drive along the central northern coast from the city of St John’s, stopping in beautiful Trinity on the Bonavista Peninsula (book dinner at the Bonavista Social Club and watch whales spout in the tickle as you enjoy a delicious meal), Eastport and Salvage, then around the Kittiwake coast with stops at J. Kean’s traditional shop in Badger’s Quay (which inspired Ellie’s and Florie’s shop), the fishing village of Greenspond, the restored historic outport of Newtown, and the long, sandy beach at Lumsden. Visit Long Point Lighthouse in Twillingate (the inspiration for Seal Point Lighthouse, then hop the ferry over to the island of Fogo and stand on one of the four corners of the world (according to the Flat Earth Society) on Brimstone Head, where it’s said the world ends at the horizon line. While on Fogo, be sure to stop at the iconic Fogo Island Hotel for lunch overlooking the North Atlantic, with icebergs and whales on view. On the way back to St John’s stop at Gander International Airport to admire the iconic mid-century interiors of the airport that played host to 38 international flights, and an extra 6,600 stranded passengers in the days after 9/11. But be warned! You may find, just like Sophie in The English Wife, that Newfoundland may entice you to stay. Thank you, Adrienne. It sounds like a beautiful place! Adrienne Chinn was born in Grand Falls, Newfoundland, grew up in Quebec, and eventually made her way to London, England after a career as a journalist. In England she worked as a TV and film researcher before embarking on a career as an interior designer, lecturer, and writer. When not up a ladder or at the computer, she can usually be found rummaging through flea markets or haggling in the Marrakech souk. Her second novel, The English Wife — a timeslip story set in World War II England and contemporary Newfoundland — is published in June 2020. Her debut novel, The Lost Letter from Morocco, was published by Avon Books UK in 2019. She is currently writing her third novel, The Photographer’s Daughters, the first of a 3-book series, to be published in 2021.