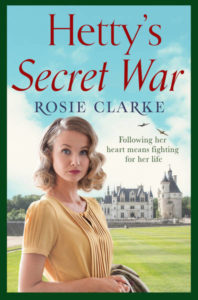 Welcome to my stop on the blog tour for Hetty’s Secret War by Rosie Clarke. I have a fab extract to share with you today. My thanks to Vicky Joss from Aria for the place on the tour.

In 1939, with the world on the brink of war, one women faces a future more uncertain than she had ever imagined…

Living in Paris, with the threat of war becoming all the more imminent, Hetty knows if she wants to stay safe, she must make her way home immediately. So she makes her way to the ports, hoping to secure one of the last places on the boats headed for England. But on her way she finds newly orphaned little girl who needs her help, and care.

And so Hetty, with little Kristina, finds herself sheltering at Chateau de Faubourg, where they are both welcomed by Countess de Faubourg and her dashing son Pierre… But the gilded walls of the Chateau hide secret war work of the most dangerous kind – but Hetty knows she owes it to the gami Beth – orphaned as a child, Beth is coming of age and determined to do her bit for the war effort.

Caught up in a whirlwind romance, she marries only to become a war widow….and one expecting a baby who will never know his brave father. Can she find happiness again? Hetty – desperately trying to make her way back from Paris to her beloved family in England, a fateful and tragic encounter brings Hetty to Chateau de Faubourg where she joins the resistance and risks both her heart and her life fighting for charismatic resistance leader Stefan Lefarge…

However dark the times, courage, determination and the power of friendship can overcome the hardships of war.

‘Oh, Arthur,’ Georgie Bridges said as the bedroom door closed behind their family doctor. ‘Why wouldn’t you take his advice? If you need tests, surely it would be best to let Benton admit you into hospital for a few days?’

‘If my number is up that’s it, old girl,’ he replied with a grimace. ‘I don’t particularly want to be pulled about by every Tom, Dick and Harry only to be told in the end that there’s nothing they can do for me. Besides, this thing runs in the family. We Bridges don’t often make old bones.’

A blackbird was trilling outside the window. It had been a beautiful day, but the bedroom was stuffy and smelled of sickness. Arthur had refused to let her open the windows despite the heat.

‘Don’t, Arthur, please,’ Georgie begged and felt the pain nag at her breast as he gave her one of his gentle smiles. Everyone loved Arthur because he was a dear, thoughtful and kind man, but he could be stubborn when he put his foot down. ‘I hate it when you talk of dying. You’re not old.’ He was only in his mid-fifties but he chose to think of himself as old and nothing she said would change him.

‘I should have snuffed it during the war and I’ve been living on borrowed time ever since, old girl – but I’ve been happy with you and I’ve no real regrets.’

‘As it happens, I am,’ he said and gave her an odd look. ‘I know you’ll grieve for a while, Georgie, but I’m a bit on the ancient side for you and I got you on the rebound. I’ve always known that. It may all turn out for the best. It’s not right that you should be tied to an invalid for the rest of your life. You could find someone else, start over…’

‘Oh, Arthur…’ Georgie shook her head. Her chest felt as if it were being squeezed and she had to bite her lip to keep back the words he would not want to hear. It was impossible to deny what they both knew was true, of course. She’d been in love with another man who’d been married. He was still married, though Georgie knew that he was unhappy and spent most of his time working in London on his writing, which had become more successful over the years. Benedict Tarleton had had two plays performed and published three books of short stories, besides managing a weekly column for a national newspaper. ‘You know that was over long ago. In fact it never really got started.’

‘I know you’ve been faithful to me,’ Arthur told her and smiled again. ‘You’ve been a good wife and given me as much of you as you could and I’ve been content – but you’ve never been in love with me, old girl. I never expected that and I don’t blame you, but it’s a fact. When I’ve gone, I want you to get out there and make a life for yourself. You’re too young to stay mouldering in the country forever.’

‘I’m not mouldering and I like living here. I’ve been happy with you, though you might not believe it.’

It was true that she’d been content, because she cared deeply for Arthur as a good friend and was grateful for all that he’d given her – but it wasn’t the heedless passionate love that she’d had for her friend Annabel’s brother. If Ben Tarleton had been free to marry for love then she would have married him, and Arthur had always known there was someone else.

However, the expression in Arthur’s eyes at this moment told Georgie that she’d hurt him in some way over the years without meaning to. God knows, she’d tried to be a good wife, tried to make his life comfortable, but something had always been missing, that magical spark of being in love, and of course he’d known that.

‘Will you eat some supper if I send a tray up?’ she asked.

‘Perhaps a sandwich and a glass of warm milk with brandy. Don’t trouble yourself, Georgie. I’ll ring for Mrs Townsend when I’m ready.’

She went out and closed the door softly, going down to the sitting room. The tears were very close but she held them back. It was too late for weeping, too late for anything really. Doctor Benton’s expression had told her that there wasn’t much hope for Arthur, and she felt as if the bottom was dropping out of her world. She’d built her world around him, enjoying their quiet life together, his little jokes and the comfortable togetherness they’d shared, but now she was beginning to understand it wasn’t enough for either of them. Because Arthur had never demanded more, she’d assumed he was content, but suddenly he was no longer bothering to hide his feelings and Georgie felt sad that she’d let him down.

She went into the sitting room, picking up a newspaper and trying to concentrate, but the news was so depressing with all the trouble in Europe, and her eyes pricked as she fought against her tears. Arthur seemed to have turned against her, almost as though he was blaming her because his illness had caught up with him too soon. Rosie is happily married and lives in a quiet village in East Anglia. Writing books is a passion for Rosie, she also likes to read, watch good films and enjoys holidays in the sunshine. She loves shoes and adores animals, especially squirrels and dogs.