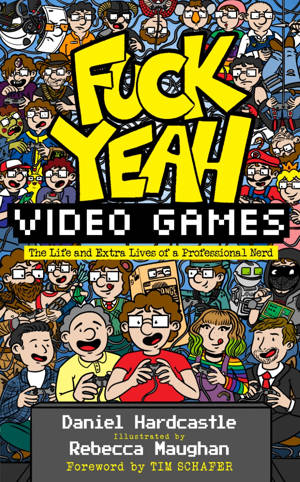 I know what you’re thinking: this isn’t Short Book and Scribes’ usual kind of read, and you would be right. However, I was drawn to this book because of my son’s growing interest in playing video games on the computer. I suspect that as he grows up he will become much more of a gamer and we definitely need to get on board with that. So I’m delighted to bring you an extract from the book today. My thanks to Anne Cater from Random Things Tours for the place on the tour.

As Daniel Hardcastle careers towards thirty, he looks back on what has really made him happy in life: the friends, the romances… the video games. Told through encounters with the most remarkable – and the most mind-boggling – games of the last thirty-odd years, Fuck Yeah, Video Games is also a love letter to the greatest hobby in the world.

From God of War to Tomb Raider, Pokémon to The Sims, Daniel relives each game with
countless in-jokes, obscure references and his signature wit, as well as intricate, original
illustrations by Rebecca Maughan. Alongside this march of merriment are chapters dedicated to the hardware behind the games: a veritable history of Sony, Nintendo, Sega and Atari consoles.

Joyous, absurd, personal and at times sweary, Daniel’s memoir is a celebration of the sheer brilliance of video games.

What is it? A life simulation.

What is it really? An excuse to set your own family alight.

The first character I created in The Sims was my dad.

For reasons lost to time, I didn’t initially make any other members of my family. Just my dad, alone, in a two-bedroom bungalow nestled in a quiet corner of Sim Lane. Beautiful place, it was. The yellow and black wallpaper clashed with the neon-brown carpet, but it clashed in a classy, modern-living kind of way.

Dad’s only company in this Magic Eye puzzle of a house was the statue of a pink flamingo that he kept in the garden. He named it Bert. Some tosser stole it on the first night.

The early days were surprisingly hard for Dad. The theft of Bert had hit him hard and he was struggling to find work.¹ His attempts to do normal, grown-up things had resulted in him urinating in the kitchen while setting fire to the only cooker in his price range. Not even the acquisition of Bert II could help liven up his dreary mood.

As he settled down that night to watch his tiny TV, he gave up all hope for a good life. Channel 5 will do that to you.

Suddenly, there was a knock at his door. Thinking it was the pizza delivery man, Dad leapt to his feet. Sadly it turned out to be only his neighbour and future wife, Bella.

As Bella Goth welcomed Dad to the neighbourhood, she was unaware she’d just met the man she’d leave Mortimer for. She was especially unaware that, due to Sims having loyalty that even Judas Iscariot would think was a touch backstabby, she’d be remarried by the end of the week.

The wedding, like the relationship, was a small affair. Dad wore black, Bella wore white and Bert wore a slim little pink number. Bella moved in immediately, complained about the dirty plates and fell asleep. Now, happily entrenched in Les Dawson’s idea of married life, Dad finally got a job.

The security gig was a breeze for Dad. He loved the graveyard shift. It paid well and gave him time in the day to spend with Bella and his hobbies.² He did come back smelling a smidge corpse-y every now and then, leading Bella to suspect that he didn’t quite know what a graveyard shift was, but she let it slide. Besides, it reminded her of Mortimer.

You know, now I think about it, there was something a bit . . . off about Bella. She was doing a wonderful job of cleaning the bathrooms, fixing broken electronics and waxing Bert II, but every now and then she’d just do something. . . weird. One day she simply picked up a bin bag, walked to the centre of the kitchen, and placed it on the floor. Neither she nor Dad could ever pick that bag up again. I ended up building a wall around it. It didn’t stop the smell. Or the flies.

Back in the world of late-night security, promotions came thick and fast for Dad. Before you could say ‘one day left until retirement’, Dad was a Patrol Officer. The mean streets of SimCity became his territory. Dad was there to serve and protect, be it against robberies, car thefts or even giant green lizards heading for the nuclear plant. For the first time in his life he was happy. Nothing was going to take him away from this.

Pregnancy is weird, isn’t it? You know those countless hours you’ve spent crafting the perfect RPG character? You know, stuff like making sure the nose for Gladius Bigpecs, Hero of the People, is the exact right distance from his philtrum? Well, having a baby is like clicking the ‘Randomise All’ button on that character. Actually, it’s worse because it’s not just the shoulders and bottom you’ll be looking at for the next fifty hours. It’s a person. A person you then have to love and keep alive. Have to. By law.

Bella’s news pierced Dad’s chest like the bullet that he would be hit by a few days later. Questions oozed out in a very similar simile. How can we afford this? What if the trash smell drives it mad? What will Bert II think? How did this happen considering we’ve only kissed and I’m pretty sure that’s wrong but I’m only eleven so I don’t know? This was set to be a scary and confusing time for all involved.

We didn’t have long to prepare. Mere seconds later a text box announced that Dad Jr was here. Well, a crib appeared anyway. Every now and then it made a noise so I assumed there was a baby in it. Could have been a Furby for all I knew.

One thing I did know, however, was that they’d all need a bigger house. Dad and Bella sold everything that wasn’t nailed down (so long, Bert II) and upsized to just down the street. Big plans were laid for the new house. Downstairs would be the kitchen, living room and pool.³ Upstairs would be the office, main bedroom and baby’s room. Actually, now we mention it . . . where was the baby?

Dad Jr was never seen again. He’d vanished without a trace. We’re assuming the moving guy labelled a box wrong somewhere and Dad Jr ended up in Mexico. You always lose something during a move, don’t you?

Bella started acting up. That might have been due to the literal loss of the baby or the comedown from lack of trash fumes, nobody really knows. The marriage dissolved soon after and she left to be with the mailman. She was married before the next collection time. A few days later Dad was shot at work. I decided to cheer him up by spending the second-floor money on a swimming pool in the garden. Lovely, it was. Diving board, lights, the whole shebang. No stairs, though. Waste of money. He could just climb out, right?

He drowned an hour later. The last thing he saw was the newly purchased Bert III. I’m sure he would have wanted it that way.

I feel I let my Sim Dad down. He had all the potential in the world and I helped him squander it on women, TVs and flamingo wax. He could have been the next John McClane but instead he ended up like David Dunn. There’s a lesson to be learned here about your kids ruining your life but, to be honest, it’s vague at best.

The next character I made was my mum. She burned to death cooking a salad on day three. The fact I even exist at all is a fucking miracle.

¹ Well, I say he was struggling to find work; I was the one who hadn’t yet found the paper on the front porch with the job section in.

² I say . . he just liked to stare at Bert II and think about the weather. Daniel Hardcastle, aka DanNerdCubed, is a YouTube gamer who has accumulated more than 2.6 million subscribers over the course of his 4000 videos. He lives with his partner, Rebecca Maughan.