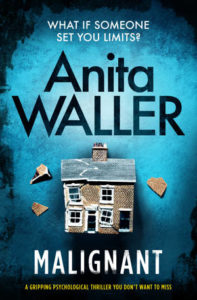 Welcome to my stop on the blog blitz for Malignant by Anita Waller. I love the cover and I’m delighted to be featuring a fellow Sheffielder on my blog. My thanks to Emma Welton from Bloodhound Books for the place on the blitz.

What if someone set you limits?

Claudia and Heather have been friends and neighbours for many years and both women decide it is the right time for them to leave their husbands. Together they get a flat but their peace is short lived when Claudia is diagnosed with a terminal illness.

Being a good friend, Heather takes on caring for Claudia but a lethal meeting with James, Claudia’s ex-husband, results in someone dying.

As life for Claudia and Heather begins to unravel, the answer to their problems becomes clear… it’s murder.

Plotting and Planning the Novel by Anita Waller

I try, I really try. When I’m feeling inadequate because I can’t do it, I sit down with a notebook and a pen, and draw round rings on my page. I then mark straight lines to connect them, just like real authors do when they’re working on their ‘plan’.

I even write a name in the central circle, one that I fondly imagine is the name of my lead character, and try to link this person to my other circles. The biggest problem with this strategy is that my main character at this momentous point, isn’t necessarily my main character as the book progresses.

This is an Anita Waller book. They could be a corpse by chapter three.

So, when I’ve done this map thing, I go on to writing down my chapter numbers. Maybe I can plot with words. Unfortunately, I’ve read too many Stephen King novels, and I love the way he will suddenly drop in a chapter with maybe three words in it. I like to do that, have a few short chapters. It doesn’t necessarily give the storyline a bit of a boost, but this author feels better for having done it. Short chapters, while very satisfying to write, rarely help with the planning.

I like to watch television between 8-10pm, because there’s usually a murder or two on at that time, but then I go in to the kitchen (I write in the corner, near the radiator) ostensibly to close any programmes I’ve left running, and evaluate my day’s work. Who am I fooling?

I casually glance through the last paragraph. Fatal. Invariably, I have to do a little correction or two, just add a few words, check my day’s word count and realise I’m only 643 off 2000 words, so I carry on.

THIS IS NOT GOOD PRACTICE! By the time I’ve extended my unplotted section, it’s slipped over the 2000 word count for the day, and I’m only 832 off 3000. I crawl into bed at midnight, having completed 3053 words, and vowing to beat that total the next day. But then it’s midnight, and I’ve been writing for the previous two hours.

I switch on my phone and begin to read someone else’s book that has probably been planned meticulously. I read a page and then my 3053 words are wanting to become 5000. Immediately.

I come out of the Kindle app and into my Notes app. Dave, ever patient, mutters something about my phone tapping away, but I find it’s best to ignore him, it only wakes him up if I comment. I write down the random thoughts generated by the late evening session on the computer, and hope they make just as much sense the following day, as they seem to at midnight.

They don’t. The direction the story was taking the previous night, has now suggested I might want to have a rethink. It’s very hard to rethink something that hasn’t really been thought out in the first place.

The plotting and planning notebook isn’t looking too good by this point, because the parts that I first started to plot, using my posh new fountain pen because it makes me write so that I can actually read it next time I look at it, is now full of biro scribbles and strange words that must have meant something when I wrote them.

Plotting my book is starting to depress me. It’s almost like arguing with myself. It doesn’t make sense for the most part, because character A catches character B selling drugs in chapter nine in my notes, but character B was thrown off a balcony in chapter six. Chapter six is a short chapter a la Stephen King.

I am totally envious of people who know their beginning, middle and end. I always seem to know my start – okay, I’ll be honest, I write a sentence and see where it takes me. The first paragraph may just get smartened up a little, but I’ve never changed a starter thought yet. The first sentence is what it is.

But that is all I know, one sentence.

This is the first paragraph I wrote as I began Malignant. The coffin was small and white, the wreath on top heart shaped and pink. Friends and family had packed into the cemetery chapel, all wearing something white in honour of the tiny child inside the coffin. Claudia and James Bell, along with their two other children, Harry and Zoe, followed the coffin down the short aisle, then sat on the left, ushered to their places by the funeral director. Their faces reflected their emotions; horror, disbelief, loss.

The only way that this paragraph changed from the day I started to write the novel, is that I changed the wreath on top of the coffin to pink. It was originally white.

I hold up my hands in surrender. I am incapable of planning anything. If I try, it becomes a complete waste of time because things change. My characters change, so how can I plan something?

I have a new notebook for each novel. I make notes as I go along, and to the untrained eye it probably looks as though it’s my plot line. It is, I suppose, but it’s used as an aide memoire to remind me of character names, what cars they drive, where they live, who they’re sleeping with; it’s my plotting and planning after the words are already written. It makes me feel better, and not so much of a dumbo who doesn’t do the job properly.

One bonus to this somewhat cavalier attitude towards my current WIP, is that I don’t get writers block. If I haven’t got a clue where it’s going in the first place, there’s not a lot of point to claiming writers block. In my case, that’s just a cop out.

And those are my thoughts on plotting a novel; great if you can, but don’t worry about it if you can’t. Just write, and let your thoughts take you on an adventure.

All of this, of course, pales into insignificance when it comes to deciding on a title…

Thank you so much, Anita. I love this post! She began writing when she was around 8 years of age, writing ‘compositions’ at junior school that became books with chapters.

In 1995 she sent Beautiful to a publisher and as they reached the contract stage the publisher went into liquidation. As a result, the book was consigned to the attic in dejected disgust but in 2013 it was dragged out again for an enforced complete re-type. The original was written on an Amstrad 8256 and the only thing that remained was one hard copy.

Anita is not a typist and it was painfully reworked over two years, submitted to Bloodhound Books who, within three days of reading it, offered her a contract. 31 August 2015 saw its release into the wide world.

34 Days followed, with its launch in October 2016. This was a huge success, particularly in the United States. While this, her third book in the psychological thriller genre, was flying out in all directions, she began work on her fourth book.

Winterscroft was a change in genre. It is a supernatural tale, set in Castleton, Derbyshire, and its release date was February 2017.

While she was writing Winterscroft, it became very clear from reading reviews that a sequel to 34 days was needed, and she began work on that. Bloodhound Books launched Strategy, on 10 August 2017.

Her next book, launched February 2018 and entitled Captor, is a psychological thriller, set exclusively in Sheffield. It was an instant success, both in the UK and the US.

The along came Game Players… once more set in Sheffield, the story involves a group of six children who have each other’s backs to a remarkable extent. The darker, criminal side of Sheffield is explored, with the book launching 18 May 2018.

Malignant arrives in the world on 10 October 2018, her eighth book in three years.