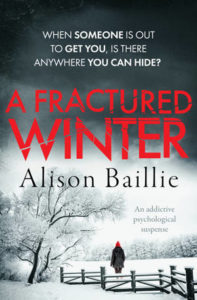 Welcome to my stop on the blog blitz for A Fractured Winter by Alison Baillie. I have a great guest post by Alison to share with you today. My thanks to Bloodhound Books for the place on the blitz.

When someone is out to get you, is there anywhere you can hide

From the outside, Olivia seems to lead an idyllic existence with her husband and children. But when she starts receiving notes, she knows her perfect life is under threat.

She thought she’d managed to put the past behind her, but someone seems determined to reveal her secret.

Meanwhile girls are vanishing in the area and Olivia fears for her family’s safety.

Has someone discovered the real reason she left Scotland all those years ago?

And does her secret have links to the recent disappearances?

When someone is out to get you, is there anywhere you can hide?

The inspiration behind the Grand Wildenbach Hotel by Alison Baillie

In A Fractured Winter, a creepy hotel in the Swiss Alps called The Grand Wildenbach Hotel plays an important role. In the book, the abandoned hotel has been taken over by a New Age cult, but the building it is based on is still operating as a hotel and is one of my favourite places to stay. The first time I saw this hotel, I was travelling on a bus over a winding mountain pass. When I saw this mysterious building, nestling behind some trees, I was so intrigued I leapt off at the next stop and had to explore it. Since then, I have stayed in the hotel many times and love the atmosphere and the wonderful surrounding countryside. The picture below was taken from my window last time I stayed there in September. The history of the hotel inspired the background to The Grand Wildenbach Hotel in the book. It was originally founded when a thermal spring was discovered and visitors from all over the world came to take the waters and enjoy the magnificent scenery. Among the famous guests who stayed there in the eighteenth century were Lord Byron, Leo Tolstoy, Friedrich Nietzsche, Johannes Brahms, Richard Wagner, Alexandre Dumas, Gertrude Bell and Conan Doyle. The present owners have kept very much as it was in the nineteenth century. The rooms have wooden walls and are decorated with period furniture. There is no TV or internet and the electricity comes from the river which cascades past it. The owners don’t like publicity, worried it will just become another stop on the tourist trail, so out of respect to them I will keep the name of the hotel and its exact location a secret.

There is no cult in this hotel, but the sect in the book was inspired by an encounter I had with a very strange group of people in a southern coastal town in England many years ago. A lovely young man I was working with took me back to the house where he lived. Although it looked like a normal imposing seaside house from the outside, as soon as I got inside, I realised it was a very strange place indeed. It was completely dark, with floor to ceiling books, curtains, statues, incense and flickering candles. There was a mixed group of people of all ages, led by a charismatic older man. They followed a philosophy of free love and it was obvious that the leader had his eye on me as a new recruit. Needless to say, I escaped as quickly as I could, but not before he’d given me a book he’d written about his beliefs. I still have it, not because of the text which is gibberish, but for the haunting photographs. One of them was of the young man I knew, taken when he’d first joined the group when he was seventeen. He became the inspiration for Sebastian in A Fractured Winter. Whenever I see this picture, my heart breaks for him and I often wonder what happened to him.

Thank you, Alison. It’s so interesting to find out about places and people who have influenced your work.