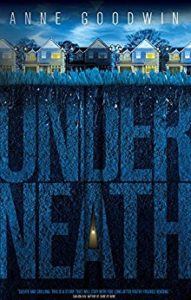 I’m very pleased today to be posting a guest post from Anne Goodwin about the inspiration for her new book, Underneath, which is available now in ebook and paperback.

My novel inspiration: what’s underneath Underneath

When the elevator pitch, or short summary, for my debut novel, Sugar and Snails, couldn’t reflect the most enticing aspect of the story because my character needed to keep it secret, I looked forward to an easier ride with my second novel, Underneath. Although there are some surprises along the way, it’s clear from the first page it’s about someone kept captive in a cellar. But, despite the simplicity of the summary, I never felt entirely comfortable telling people about my forthcoming book. Partly, with chilling news reports about women kidnapped and imprisoned in some type of hideaway around the time I started writing it in 2010, I was concerned about appropriating someone else’s horror story. But I also had a sense that woman-imprisoned-in-a-cellar wasn’t really what it was about.

My novel does relate the events from the moment my narrator, Steve, out house-hunting, is shown around a house with a cellar to when he slides three bolts across the door with a woman trapped on the other side, and onwards to the challenges of leading a double life. But the seed of the story was an image that came to me of a lonely little boy sitting at the bottom of a carpeted staircase feeling sad. Why did he feel so alone and unloved? What kind of man would that little boy grow up to be?

I was influenced by memories of a controversial advertising campaign run by the children’s charity, Barnardo’s, showing (photoshopped) images of babies born in poverty as the adults they might become. Shocking as such images were, such as one of a baby with a cockroach in its mouth and another apparently drinking from a bottle of methylated spirits, they told a story, an important one to my mind, of the vulnerability underneath those we deem delinquent or villains.

I also knew from my own therapy and from my previous professional role as a clinical psychologist, that more goes on beneath the surface of a person than others could never begin to imagine. Our public persona is the tip of the iceberg – or the ears of the hippopotamus if you come from a part of the world where their gargantuan bulk might be hidden below the surface of the pool – of deep-rooted fears, passions and desires. Given my background, it’s not surprising that underneath is as much a story of a metaphorical cellar as an architectural one. It’s the story of a man who can’t acknowledge there’s a hole in his psyche where his father, dead before he was born, should be. A man who can’t allow himself to be curious about art that disturbs. A man so desperate to get away from the lonely child he once was, he’s spent twenty years travelling the world. A man who, when his girlfriend threatens to leave him, can’t bear to let her go.

It might seem rather grand, or too vaguely airy fairy, to suggest that Underneath is inspired by everything I’ve learnt about a person’s inner world. But, rather like my first novel was, it’s the story of a life I’ve only imagined, firmly rooted in the one I’ve lived.

That was fabulous, Anne. Thank you so much! Anne Goodwin’s debut novel, Sugar and Snails, was shortlisted for the Polari First Book Prize. Her second novel, Underneath, is scheduled for publication in May 2017. Anne is also a book blogger and author of over 70 published short stories.