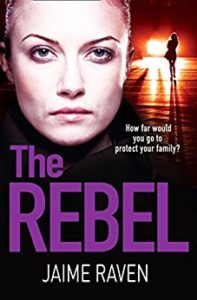 Welcome to my stop on the blog tour for The Rebel by Jaime Raven. I so wish I could have fitted in a read of this book in time but you know, so many books, so little time. Anyway, what I do have for you today is a fab guest post by Jaime. I’d like to thank Sabah Khan from Avon Books for the place on the tour and the review copy.

Sometimes you have to take the law into your own hands…

DI Laura Jefferson will do whatever it takes to bring down London’s most notorious crime boss. When her team receive a deadly threat – stop their investigation or the police and their families will be targeted – but they aren’t willing to back down…

Then the killings begin.

A new body is turns up every day, and with no leads, Laura knows she has to take action. Her family is innocent and she’ll stop at nothing to protect them.

When someone close to her is hurt, she’ll break every rule in the book to get vengeance.

You can buy The Rebel now in ebook and paperback.

WHY I FOLLOWED A PATH OF CRIME by Jaime Raven

Authors are frequently asked why they decided to write books in a particular genre. In many cases the answer is because it enables them to draw on their own personal experiences.

Take me, for example. I became a crime novelist for a number of reasons – all of them associated with what’s happened to me over the years.

My late mother had a passion for books by Agatha Christie, one of the world’s greatest crime authors. She encouraged me to read them in my early teens and I became hooked.

At that time I lived with my family in a council house in a part of London with a high level of street crime. I was exposed to a great deal of anti-social behaviour and unsavoury violence. I even witnessed a serious stabbing.

I didn’t realise it then but these experiences would have a huge bearing on what kinds of books I would eventually write.

Crime then played a big part in my long career as a newspaper and television journalist. I worked for two national newspapers and a news agency as a general reporter. But most of the stories I covered were crime-related. This was because for much of the time I worked the late shift until three in the morning.

This suited my personal circumstances and meant I was on hand when crime stories broke during the night, as they often did.

I covered murders, robberies, police raids and terrorist attacks. I saw dead bodies, police firearm officers in action, witnessed first-hand the devastation caused by a bomb blast, and I interviewed dozens of victims of crime. I was also a frequent visitor to the Old Bailey where I covered some of the big criminal trials.

So given all that I had experienced during my life it was a no-brainer when it came to deciding what genre I would write in. I draw on those experiences every time I put pen to paper.

My latest book, The Rebel, features gangsters and assassins, and of course detectives who are struggling to stem the rising tide of crime in London. All the locations I’ve included I’m familiar with.

In one of my previous books, The Alibi, the main character is Beth Chambers, a young crime reporter working for a London newspaper. She comes up against one of the capital’s most ruthless villains. She was an easy character to write up because I based her on myself.

Most of the other main characters in my books are loosely based on people I encountered during my time as a hack, including crooks and cops and victims of crime.

And many of the plots and events can be found in my cuttings file that contains a large number of stories I covered.

In fact I’ve spent the last few days sifting through those cuttings looking for ideas for my next book.

Should it involve an armed siege? A kidnapping? A murder? A terrorist attack?

It doesn’t actually matter if this time round nothing inspires me. Going through the cuttings is always fun – like a trip down memory lane.

Thank you so much, Jaime. They say to write what you know and you’re definitely drawing on some fascinating experiences in your writing. Jaime Raven lives in Southampton, UK and writes full time. The author is a former newspaper and television journalist and spent many years covering crime stories in and around London.

Jaime is also the author of The Madam and The Alibi.