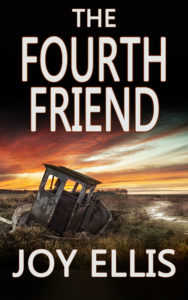 Posted on 2nd September 2017 By Nicola

I’m so pleased to be on the blog tour today for The Fourth Friend by Joy Ellis. It’s the third in the series featuring DI Jackson and DS Evans. So what’s it all about?

Police detective Carter McLean is the only survivor of a plane crash that kills his four best friends. He returns to work but he is left full of guilt and terrible flashbacks. So for each of his four friends he decides to complete something that they left unfinished.

Eighteen months before the crash, Suzanne Holland disappeared, leaving a room with traces of blood, but no other leads. Suzanne was the wife of one of Carter’s four best friends.

Adding to the pressure, the boss’s daughter has a stalker. Due to the sensitivity of the Holland case, Carter is put on this investigation.

DS Marie Evans is the only person Carter can confide in. But even she begins to doubt whether he can really cope and whether he is actually losing his mind.

DI Jackman and DS Evans of the Fenland police face a battle to untangle three mysteries, and can they really believe their friend and colleague Carter?

Full of twists and turns, this is a crime thriller that will keep you turning the pages until the shocking ending.

I write in a garden office, wonderful for getting well away from the ironing board and the dusting! Not so good in really awful weather. I have been marooned for hours as an East wind blasted a large portion of the North Sea into my garden. (Well, it felt like that!) I love to go out really early, around 6am is a good start, and then the day has not had time to get in the way of my thoughts. To write after lunch is a no-no. Sluggish brain equals rubbish writing. And then late at night is a good time too, especially when it’s dark and I’m alone with just the owls and bats for company. And yes, we do actually have bats in the garden.

Definitely the readers! I cannot even try to explain the feeling when someone contacts you and has read and enjoyed your books. They talk about your characters in real terms, they ask about their lives and share personal experiences that mirror those characters. The readers bring those fictional beings to life. They tell you that immersing themselves in your stories helped them through tough times; that you were with them in the hospital waiting room; that you filled an empty evening; that just for a while, you helped them switch off from some of the bad or difficult things in their life. It is humbling, and so rewarding.

Vividly. It was a ghost story and the protagonist was a little boy with no friends. His favourite place to play was the village churchyard. One day he met Alice Simmonds, a girl of about his own age, and they became great friends. He met her every day after school and was desperate for her to have tea with him and his mother, but Alice told him that her parents wouldn’t allow it. She wouldn’t even tell him where she lived, so one day after they said goodbye, he doubled back and decided to follow her home. Hidden by the gravestones he watched her walk towards the back gate, then stop and kneel beside a large marble family grave. And then she disappeared. He went to look for her, but suddenly realised that the name on the grave was Simmonds, and the sad memorial told of a car crash that had taken the lives of the whole family, including the youngest daughter, Alice. Although he visited every day after that, he never saw her again.

I was seven years old.

You’ve sold over half a million books, does success change how/what you write?

I didn’t know I’d sold over half a million books until this was pointed out to me! Even the thought of it is surreal. But no, it doesn’t change how I write, except maybe I am stricter with myself to achieve a certain quota of pages in a short time frame. I love writing with a passion, and I love mysteries, so all I want to do is keep them coming. I do feel an enormous responsibility to my readers to produce good books and different stories that they will not want to put down.

Crime is my thing, obviously. Heavens, I live with a retired police officer; my childhood heroine was Agatha Christie; and I’ve read murder mysteries since just after Janet and John, Book One. What else would I write? Psychological thrillers are also very much in my remit, like the new Jackman novel, The Fourth Friend. I stepped outside my comfort zone when I wrote Guide Star, but was encouraged to do so to extend the emotional side of my characters. It was an interesting exercise, and the book was surprisingly well received. What next? One day I’d love to write a really scary paranormal thriller, well actually I’ve already written it, but I’m too scared to show anyone!

Thank you so much for such interesting answers to those questions, Joy. I’m very impressed with your ghost story and am amazed you could have written something like that at age 7. You were clearly meant to be a writer.

There are some great blogs taking part in the tour. Don’t forget to go and have a look. I was born in Kent but spent most of my working life in London and Surrey. I was an apprentice florist to Constance Spry Ltd, a prestigious Mayfair shop that throughout the Sixties and Seventies teemed with both royalty and ‘real’ celebrities. What an eye-opener for a working-class kid from the Garden of England! I swore then, probably whilst I was scrubbing the floor or making the tea, that I would have a shop of my own one day. It took until the early Eighties, but I did it. Sadly the recession wiped us out, and I embarked on a series of weird and wonderful jobs; the last one being a bookshop manager. Surrounded by books all day, getting to order whatever you liked, and being paid for it! Oh bliss!

And now I live in a village in the Lincolnshire Fens with my partner, Jacqueline, and our two second generation Springer spaniels. I had been writing mysteries for years but never had the time to take it seriously. Now I can, and as my partner is a highly decorated retired police officer; my choice of genre was suddenly clear. I have set my crime thrillers here in the misty fens because I sincerely love the remoteness and airy beauty of the marshlands. This area is steeped in superstitions and lends itself so well to murder!

I am now lucky enough to have joined the amazing Joffe Books team of authors and am really enjoying being able to spend time doing what I love… writing!