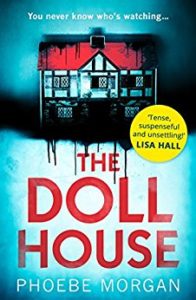 I’m delighted to be on the blog tour for The Doll House by Phoebe Morgan today. It’s a book I really want to read (I own two copies: the ebook and a copy that I won in a competition kindly run by Phoebe) but unfortunately I just haven’t managed to get to it yet. I’m hearing wonderful things about it so I hope to read it very soon.

In the meantime, I have a great guest post from Phoebe about how to get a literary agent. But first of all, here’s what The Doll House is about:

A gripping debut psychological thriller with a twist you won’t see coming. Perfect for fans of I See You and The Widow.

If you like the sound of it then you can buy the ebook for just 99p at present.

How to get a Literary Agent

I can remember the day I signed with my agent, Camilla Wray at Darley Anderson, really vividly. It was such an exciting time – we signed the contracts at the London Book Fair a couple of years ago and then had a (small!) beer each before going off to other meetings (technically we were both working!) I spent the rest of the day feeling like I had this exciting secret fizzing away inside me, but I didn’t really want to tell anyone other than my family in case it all came to nothing. Until the moment I scribbled my name, I was terrified Camilla would phone up and tell me that she’d made a mistake – it wasn’t actually me she wanted to sign up!

It wasn’t a mistake though. Camilla has been my agent since April 2015 now and it’s so useful having someone to fight your corner, help you work out editing problems and explain to you how the publishing world works if you’re not sure. But of course, it can also be hard to get an agent, and I had my fair share of rejections along the way.

Everyone approaches getting an agent differently, and some people choose not to have agents at all. For me, it was the only path I ever wanted to take because I knew a traditional publishing route was what would work best for me, although I hugely admire self-published authors and authors who get deals without agents too. But there is something to be said for having that person to open doors for you – a lot of publishers won’t consider unsolicited manuscripts, so I thought it made sense to give getting an agent a good go before I even thought about getting published.

I had a spreadsheet with a list of agents that I wanted to query on, and I would put sad little Rs in the end column if I had had a ‘thanks but no thanks’ email. If an agent requested to see the full manuscript, I put a little yellow box. I was lucky in that a few agents (maybe four or five) did ask to see the full, and I also met with one other agent before meeting with Camilla. He was also incredibly helpful, but when she offered me representation he stepped back (in a nice way). For me, it was a question of making sure the agents I was querying represented the sort of book I was writing – I spent a long time looking at agent wishlists online, reading Q&As with them, and looking through the Writers’ and Artists’ Yearbook. I also tried not to let agent rejections get me down – it can be such a subjective thing, and it’s impossible for everyone to love your book when they see hundreds of manuscripts a week.

It’s important to query wisely, keep track of who you’ve contacted to make sure you don’t send it twice, and keep positive. When I got a rejection, I usually tried to query another agent quite soon after, so that I had the same number of queries out in the world. There is so much info out there about what agents are looking for, and it’s good to keep an eye on new agents who might be building their lists too, as some agents do get full up! Above all, make sure you keep positive. If your writing is good, an agent will notice – as long as you approach the right ones!

Great stuff, Phoebe. That’s really useful for anybody who’s written a book and is thinking about looking for an agent.

My thanks to Helena Sheffield for the place on the blog tour. Please do have a look at the other blogs taking part in the tour for a mixture of reviews and guest posts. Phoebe Morgan is an author and editor. She studied English at Leeds University after growing up in the Suffolk countryside. She has previously worked as a journalist and now edits crime and women’s fiction for a publishing house during the day, and writes her own books in the evenings. She lives in London and you can follow her on Twitter. The Doll House is her debut novel.