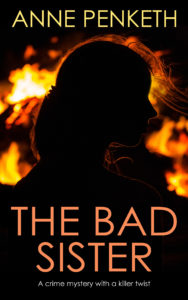 I’m pleased to be taking part in the blog tour today for The Bad Sister by Anne Penketh. Later on in this post we’ll be learning ten things about Anne but first let’s see what The Bad Sister is all about.

DI Sam Clayton is called to a murder scene in Holt, not expecting to find his estranged sister at the scene. Her husband, Henry Lambton, has been murdered. Clayton is taken off the case and DS Julie Everett continues the investigation.

Clayton focuses on a vicious arson attack in Norwich. The fire killed a Polish family in their home. It seems to be part of a series of racist attacks connected to an extremist group.

The two crimes stretch the team and both come dangerously close to home. And can Clayton forgive his sister for what happened over twenty years ago?

In a thrilling conclusion, they race against time to prevent more attacks and get justice for their loved and not so loved ones.

THE BAD SISTER is the second in a new series of page-turning crime thrillers set in an atmospheric part of Norfolk. Perfect for fans of LJ Ross, Mel Sherratt, Colin Dexter, or Ruth Rendell.

THE TEAM
Detective Inspector Sam Clayton leads the investigation into the North Norfolk murders, joined the police straight from school as a beat bobby in Manchester before rising through the ranks of the CID. He was transferred to Norwich after being promoted to DI following a high-profile case investigated by Lancashire Constabulary.

Detective Sergeant Neil Pringle lives with his third wife in Norwich, where he was born. But taking care of his two sons with his wife Megan, and two other children with previous wives, has put his finances under strain. He never misses a chance to shine in hopes of securing promotion, and can’t help showing off his local knowledge to colleagues.

Detective Sergeant Julie Everett is an intuitive officer who was promoted to detective sergeant from her home town of Ipswich where she had a background in child protection. She is discreet about her personal life among colleagues, particularly about the tragedy which haunts her. She has to deal with a high-pressure job while raising her child who moved with her to Norwich.

I spent my formative years in Preston and couldn’t wait to get to London where I went to university. But since then I’ve come to appreciate the lure of the Lancashire fells and the coastline, and the great walks in the Lake District where I was dragged kicking and screaming as a child.

I live in Paris

I’ve been so lucky to have had a journalistic career during which I was posted to Moscow, Paris and New York, and also worked in Washington DC, but now I’m back in Paris where I’m loving it. It’s not too far from home but the physical distance from my oldest friends and family means that my Paris flat is almost like a refuge where I write.

When I celebrated my last “big” birthday, I decided to throw a party, and thought: what can I do that would really surprise my friends and family? It was a ABBA-themed party, and three of us were going to perform Dancing Queen, so I thought I’d learn to tap dance. Of course the ten lessons I took weren’t enough to make much of an impression, but I’ve carried on for the last five years, and really enjoy it. By the time my next big birthday comes along, I might even put on a little number…

I quickly gave up my original idea of performing in my play, Sugar Baby, and found a fantastic English actress in Paris who got great reviews in Edinburgh. But it was a huge risk, to say the least, deciding to spend the whole of August on the Fringe as a complete unknown.

I moved to Montreal in my twenties with only a suitcase, then reinvented myself as a fiction writer after years as a foreign correspondent, and now I’ve written my first play. So I’ve been forced to admit that I’m not afraid of risk. In fact I seem to thrive on it, although sometimes it looks like recklessness, and many’s the time I’ve said to myself, what on earth have I done?

For quite a while after my husband died, I was in denial about being placed in a category called ‘widow’ and I certainly didn’t want people to pity me. But I’ve come to realise over time that his death was a defining moment for me, as it led to me temporarily giving up my chosen career and moving to Washington. I’m convinced it also somehow unleashed the stories inside me which are now pouring out.

As a Brit living in Paris, and having worked outside the UK for many years, I have this weird sense of not really belonging anywhere. I’m an outsider, and consequently feel authorised to criticise wherever I am. This propensity to criticise is of course the professional  trademark of any journalist or writer. But I wonder whether other exiles feel like me.

I’m deaf in one ear

This is a health warning: I perforated my eardrum with a Q-tip after washing my hair and two separate operations were needed to graft over the hole. Don’t do it! As a result, I’ve lost 60 percent of the hearing in that ear, and suffer from tinnitus.

A book changed my life

I read a lot of crime novels and thrillers, and enjoy such writers as Ian Rankin and Lee Child. I’m also addicted to TV crime dramas, particularly Spiral, Happy Valley and Line of Duty. Zen and the Art of Motorcycle Maintenance actually changed my life, as I bought a motorbike after reading it.

As I don’t have children, my social life revolves around friends and family. I realise now how important it is to have kept up friendships over time and across the oceans. The steady stream of friends and family – including one friend with whom I’d been at primary school – was what kept me going in Edinburgh this summer.

Fascinating stuff, Anne. I must be careful with those cotton buds!

If you fancy reading The Bad Sister then it’s available now in ebook and paperback.

Please do have a look at the other blogs who have taken part in the tour. I’m a Lancashire lass but for most of my career, I’ve been a foreign correspondent. I’ve reported from all over the world on some of the most cataclysmic events of our time, including the Egyptian revolution and the collapse of the Berlin wall.

These days I’m based in Paris and concentrating on fiction writing. The first in a series of crime novels featuring Detective Inspector Sam Clayton,  Murder On The Marsh, is out now. My first novel, Food Fight, was published in 2015.

I’ve reported  from Paris mainly for The Independent and The Guardian, but I also contribute to France24 television and Monocle radio.  (I was The Independent’s Diplomatic Editor, while based in London). As a freelancer, I’ve written for The New Zealand Herald and The National (Abu Dhabi), as well as the LA Times, the New York Times, the Radio Times, the Oldie, Monocle magazine, Quartz, and Spark News.

Between 2009 and 2012, I headed the Washington office of the British American Security Information Council (BASIC), a trans-Atlantic NGO focused on nuclear disarmament, during which time I was also a blogger and columnist for The Hill commenting on foreign affairs.

During my ten-year stint on The Independent I was one of the few journalists to report from Iran, North Korea and Saudi Arabia.

Earlier, I was a staff foreign correspondent with the French news agency, AFP, which posted me to Moscow during the incredible Gorbachev years. I also reported for AFP from France, and New York where I covered the United Nations.

I started my journalistic career in Canada, arriving with two suitcases to seek my fortune in Montreal, from where I reported for British newspapers before getting a job on the Montreal Gazette.

Before that, I was a postgraduate student at University College London whose French department nurtured my lifelong love of French literature. As a result, my own books include a dash of French spice.