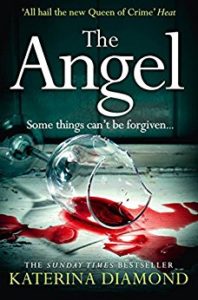 I’m delighted to be taking part in the blog tour today for Katerina Diamond’s latest book, The Angel. You might know her from her previous books, The Teacher and The Secret. I have a fabulous guest post from Katerina about big crime in a small town but first here’s what The Angel is about.

When a burned body is found in a disused signal box, suspicion falls on lonely teenager Gabriel Webb. There’s no doubt he was at the scene of the crime, but does he really deserve what awaits him in prison?

DS Imogen Grey is certain there’s more to the case than meets the eye. But while she struggles to convince those around her of the truth, her partner DS Adrian Miles is distracted by his own demons.

When a brutal double murder is reported, their investigation is stopped in its tracks. Is the body in the box even who they thought it was? The duo realise Gabriel might have been locked up for a crime he didn’t commit. But with enemies watching Gabriel’s every move, they may be too late.

Miles and Grey are back in the thrilling new novel from bestselling author Katerina Diamond, perfect for fans of Karin Slaughter and M.J. Arlidge.

Big crime in a small town

I used to live in a small seaside town in Devon called Sidmouth. It was a very picturesque place although I was quite a bitter and miserable teen so I didn’t really appreciate it at the time. As with all small towns it had its problems, not least of all that there was nothing for the younger generation to do. As I lived above my Aunt and Uncle’s rather large fish and chip shop I often spent time in there, I would sit at the table and listen to people’s conversations or just people watch. There were several regulars, particularly in the mornings, who would sit near the staff table and chat to the ladies who worked in the mornings on their breaks.

There was one lady who used to come in with her children. Pamela. I remember her for various reasons but she stood out because she was very attractive. She had long blonde hair that reached down to her hips. Her children were a few years younger than me but quite sweet and quiet, a boy and a girl. She would wear long sleeved, high neck tops with floor length gypsy skirts, her hair always in a modest half up and half down and aside from mascara no make-up at all. She would sit on the table next to the staff table sometimes and chat with some of the other regulars. She had a lovely smile. That’s pretty much all I remember about her.

Everyone noticed a change in Pamela one summer. She had started wearing short skirts, vest tops, jewellery and make- up. She was more confident and outgoing than she used to be, many people commented on it. She told everyone her husband had gone away on business ‘up north’. Without him around her behaviour and demeanor was different. Even her children seemed a lot happier than the quiet shy children that sat in the corner and said nothing.

One day our quiet seaside town was shaken with the news that a dismembered body of a man had been found hidden in a ditch in five separate bags.  No head was ever found. Apparently Pamela had confessed to a friend that she had killed her husband eight months earlier.  Her friend felt compelled to tell the police. This lead to the discovery of the body in a ditch 250 metres from her house. To say that everyone was shocked by this was an understatement. She just didn’t seem the type, if that’s even a thing.

Pamela was arrested and charged with murder. During the trial, the facts that came out painted a picture of abuse that was hard to stomach. Pamela was literally treated like a dog by her husband, he even had a leash for her which he would tie her up outside with when he was displeased with her. She was forced to be his table by standing on all fours naked while he put his hot dinner plate on her back and ate. The police discovered a cupboard full of bondage equipment that he regularly used to keep her in line. He was physically, psychologically and sexual abusive towards her. He was violent and unhinged and she bore the brunt of his temper. He was branded a monster by anyone who heard the full details of Pamela’s daily life.

One night, Pamela waited until her common-law husband was asleep and took a plumb line out of his tool box. She wrapped it around the bedpost and then around his neck, she pulled on it until he died. She put his body in the wardrobe while she figured out what to do next. Two days later she dismembered him and placed his body in 5 separate bags and dumped it over the next few days. She kept his head in a cupboard for months apparently just to reassure herself that he was definitely dead. After hearing Pamela’s account of what happened, the jury convicted her of manslaughter due to diminished responsibility and no time was served.

I often think about Pamela and her poor children. I wonder if any of us would have behaved differently in those horrific circumstances.

Crikey, what a horrendous story. Who knows what any of us would do in such circumstances. Thank you so much Katerina for such a fascinating, yet sad, guest post.

Like the sound of The Angel? It’s available now in ebook and paperback.

And why not follow the rest of the blog tour? Katerina Diamond lives on the east Kent Coast with her son and daughter. Born in Weston-super-Mare, she has lived in various places since including Greece, Cyprus, Derby, East London and Exeter. Her first novel reached number six in the Sunday Times Bestseller chart.