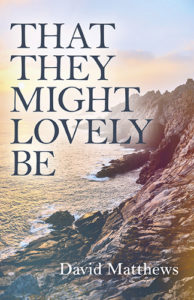 #blogtour – That They Might Lovely Be by David Matthews #GuestPost

I’m delighted to be taking part in the blog tour today for That They Might Lovely Be by David Matthews. Thank you to Frances Teehan for asking me to be a part of it. This is another one of those pesky occasions when the book sounds fabulous but I just can’t fit in a read of it. But I do have a great guest post from David for you to read and enjoy. First, let’s have a look at what the book is about:

No-one thought Bertie Simmonds could speak. So, when he is heard singing an Easter hymn, this is not so much the miracle some think as a bolt drawn back, releasing long-repressed emotions with potentially devastating consequences… A decade later, Bertie marries Anstace, a woman old enough to be his mother, and another layer of mystery starts to peel away. Beginning in a village in Kent and set between the two World Wars, That They Might Lovely Be stretches from the hell of Flanders, to the liberating beauty of the Breton coast, recounting a love affair which embraces the living and the dead.

That They Might Lovely Be is available in ebook and paperback.

Ever had that experience where you are minding your own business, trawling down a supermarket aisle, ambling down the high street or humming tunelessly on a station platform, and someone you cannot recognise from Adam (or Eve) greets you enthusiastically? Of course you have. If you’re lucky, the stranger’s identity will come to you before you have to admit ignorance. Unfortunately for me, after thirty years teaching in three comprehensive schools in Croydon, there are now thousands of people I have taught, loads more whom I have had some sort of connection with and myriads upon myriads who know me from afar. The chance of me now remembering their name (even if I ever knew it) is very slight.

I have developed lots of cunning strategies. “How long ago was it that you were at school? Tell me who else was in your year? Who else do you keep in touch with? What are you doing now?” All those questions which, with a bit of luck, can put off the inevitable (“I’m terribly sorry but I haven’t the foggiest idea who you are”) before an escape can be effected.

A teacher has a public profile. To some extent, it can be managed like an extension to the classroom: approachable but not overly friendly; fair but formal; if familiar, never intruding. For someone like me, with absolutely no presence on the various social-media/networking sites (except for that time when someone photographed me dancing at the Year 11 Prom), maintaining an appropriate image is relatively easy. My identity as a teacher was not so divorced form my identity as a colleague, friend, parent. But what happens when, as a novelist, you project someone else entirely?

That They Might Lovely Be is not autobiographical in any sense. There are no exposés. But that does not mean it is not revealing. This book emerged from my head. The characters have been imagined by me. They are, in some strange way, ‘me’. Some of them behave appallingly. And some of them have sex. Even if it’s true that no publicity is bad publicity, I’m not sure that “Sir’s Sex Scenes” is the headline in the local rag I want to attract.

I hope, of course, that my novel has enough stature to make the life of its author an irrelevance. I hope that the world I have created, which my characters inhabit, is so engrossing that it would be intrusive to run the writer’s old identity alongside it. The fact is, even as a novelist new to the game, I feel more than ever I was as a teacher. Who remembers the spawn and the tadpole when there’s a frog leaping over the lily pads? Who cares about the frog when the prince’s metamorphosis is complete?

Do please have a look at the other blogs taking part in the tour. David Matthews was a teacher for twenty-two years and a head teacher for eleven. His play ‘Under the Shadow of Your Wings’ was professionally directed and performed in the summer of 2015, as part of Croydon’s heritage festival. David divides his time between family life in Croydon and renovating a cottage in south-west France.