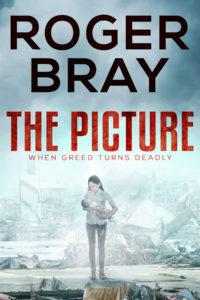 I’m delighted to welcome Roger Bray back to my blog today with a Q&A about his latest novel, The Picture, and about his writing in general. Thank you to Rachel Gilbey from Rachel’s Random Resources for asking me to be a part of the tour.

A warehouse in Japan used as an emergency shelter in the aftermath of the 2011 Tsunami. A distraught, young Japanese woman in dishevelled clothes sits on a box, holding her infant daughter. Ben, a US rescue volunteer, kneels in front of her offering comfort. They hug, the baby between them. The moment turns into an hour as the woman sobs into his shoulder; mourning the loss of her husband, her home, the life she knew. A picture is taken, capturing the moment. It becomes a symbol; of help freely given and of the hope of the survivors. The faces in the picture cannot be recognised, and that is how Ben likes it. No celebrity, thanks not required.

But others believe that being identified as the person in the picture is their path to fame and fortune. Ben stands, unknowingly, in their way, but nothing a contract killing cannot fix.

The Picture sounds like such an intriguing read and I wish I could have fitted in a read of it. If you think so too then you can get hold of a copy on Amazon.

1. First of all, can you tell me where the idea came from for The Picture?

The idea of the picture didn’t come from the story but a minor incident when I was standing in my back courtyard on a cloudy day. The clouds broke and a beam of sunlight broke through, like a spotlight. The image stayed with me and I thought how something like that could frame an image. The image itself I developed over the next few weeks to the titular one of the novel. The ideas of how the picture came about and where it went to from there developed as I wrote.

2. I find the idea of a picture becoming a symbol of hope really interesting. Did you have any particular images in mind when you were writing The Picture?

The idea came from many places. The beam of sunlight is used as a device by many artists, even biblical references use the beam of sunlight as depicting something marvellous. It was that idea I had in mind when I developed the theme. Sunbeams are used to frame or focus the viewer’s attention, but also to depict the light as hope, breaking through the dark times. I cannot say that I consciously considered any of those things when I was developing the idea but now, having been asked the question, the idea of cutting through the dark times was central to my concept of what I wanted The Picture to look like.

3. I understand that you were a police officer. Do you use any of your experiences in your writing?

Absolutely, but not as as police procedural input. What I find invaluable is my experience of dealing with people. How they react in any given situation. How different people react to bad news or a bad event they are involved in. For example in The Picture a pair of teenagers hear and go to investigate a vehicle crash.  The young lad, even though he is scared of what he might find, protects the girl from seeing what is a horrendous scene. As soon as she leaves he throws up, but continues to do what he has to. I have seen this in real life in disasters and accidents where people hold it together so they can function and do what needs to be done then have a quiet melt down when it is over.

4. Can you tell me more about how you became a writer?

It is cliched I suppose to say that I have always enjoyed writing. My sense of being a writer was almost strangled at birth while I was at school. In my second or third year of senior school we had to write a short story in classical studies. The topic I chose was about Minoan Bull leapers. The leapers, boys and girls, were given to the Minoans as a tribute each year and they trained on a brass bull with sharp horns. To succeed in bull leaping brought great pride to their home states. My story concentrated on the training and, often  fatal, mistakes. The best short story was to be included in the school magazine, and I won.  I was very excited to be getting my short story printed, until I was told that it was too bloodthirsty for my age group and got pulled. I still remember the bitter disappointment of that incident and it made me give up on writing, what’s the point I remember thinking. Fast forward a few years and I decided that one stupid decision by a narrow minded deputy head should not stop me from doing what I enjoyed and I went back to short story writing, then a few magazine articles culminating with deciding to write a book.

5. And if you weren’t a writer what do you think you would be doing now?

Exactly what I am doing but without the enjoyment and escape from the mundane that writing brings.

I would not say that I plot meticulously. I tend to think plots through a lot before writing, maybe make a few notes of what I think initially are key points, but these do change along the way. I certainly don’t plan out a story line like a story board. My writing goes where it takes me.

I like to have a few days in blocks to write, I don’t do well trying to cram a couple of hours in every so often. I find if I write in blocks I can immerse myself in the story and get a better sense of where the story is going and it allows me to concentrate on the writing.  My writing day consists of rereading the previous session’s output, not really editing except for any major errors, then continuing. Write for as long as can, try to keep going a little more then have a break. Depending on the ideas flow a session can be two hours or ten.

I enjoy reading, I always have but I don’t seem to have the time to read as much as I want to. Recently I have been reading Robert Harris’s Officer and a Spy, rereading a couple of Leon Uris’s books Exodus and Trinity.

Like wearing a special hat or only using green ink? No nothing at all I’m afraid. The only quirk is trying to stop my wife’s cat from trying to sit on the keyboard. When he sees me typing he likes to sit next to the keyboard and occasionally smack it with his paw as well.  Errant letters I can deal with but one day he’ll hit alt, ctrl, delete which won’t impress me at all.

I am currently about half way through another thriller, also set in Oregon. New characters, new ideas and a new plot that I am having fun developing.

Thanks for having me and for your thoughtful questions which I enjoyed answering.

And thank you, Roger, for such full and interesting responses. I have always loved writing; putting words onto a page and bringing characters to life. I can almost feel myself becoming immersed into their lives, living with their fears and triumphs. Thus, my writing process becomes an endless series of questions. What would she or he do, how would they react, is this in keeping with their character? Strange as it sounds, I don’t like leaving characters in cliffhanging situations without giving them an ending, whichever way it develops.
My life to date is what compels me to seek a just outcome, the good will overcome and the bad will be punished. More though, I tend to see my characters as everyday people in extraordinary circumstances, but in which we may all find our selves if the planets align wrongly or for whatever reason you might consider.

Where it will take me I have no idea but I am going to enjoy getting there and if my writing can bring some small pleasure into people’s lives along the way, then I consider that I will have succeeded in life.