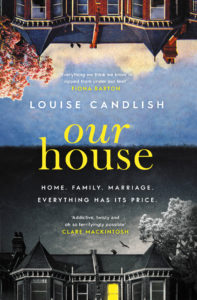 I’m absolutely delighted to be posting today as part of the blog tour for Our House by Louise Candlish. Sadly, I haven’t had chance to read the book yet but I know this is one that I’m going to love. So in the meantime, I have a Q&A with Louise for you today. I’d like to thank Jess Barrett from Simon & Schuster for the review copy and for asking me to be a part of the tour.

FOR BETTER, FOR WORSE.
When Fi Lawson arrives home to find strangers moving into her house, she is plunged into terror and confusion. She and her husband Bram have owned their home on Trinity Avenue for years and have no intention of selling. How can this other family possibly think the house is theirs? And why has Bram disappeared when she needs him most?

FOR RICHER, FOR POORER.
Bram has made a catastrophic mistake and now he is paying. Unable to see his wife, his children or his home, he has nothing left but to settle scores. As the nightmare takes grip, both Bram and Fi try to make sense of the events that led to a devastating crime. What has he hidden from her – and what has she hidden from him? And will either survive the chilling truth – that there are far worse things you can lose than your house?

TILL DEATH US DO PART.

You can buy Our House now in ebook and hardback.

1. First of all, can you tell me where the idea came from for Our House?

I wanted to write a big thriller with a property theme and two newspaper articles caught my eye at the same thing: one about house fraud and one about bird’s nest custody arrangements. Soon after that, I went on a speed awareness course and, sitting there with the other disgraced motorists, I had an idea about how I could draw all these things together.

2. Some of the early reviews suggest there is a twist (or maybe more than one) in Our House. How hard is it to come up with twists and do you feel there is a pressure on writers now to try to deliver an earth-shattering twist?

I honestly don’t think in terms of twists and I discourage readers from paying attention to any promises of them! If you’re waiting for a twist, you’re having a different experience from reading a story with an open mind, that pleasure of letting the suspense build. The way I try to construct a story is with a series of revelations and dramas. People are talking about the twist in the final few lines of Our House, but I didn’t write it with that intention. To me, it was the only way the story could end.

3. You’re now on your twelfth book – congratulations on such a successful writing career. It seems to me that your more recent books have a much darker feel than your earlier work. Was it a conscious decision to change direction or was it just where your writing led you?

Thank you! My career has had its ups and downs, that’s for sure. My stories have developed naturally, I think, as I’ve grown up myself. I also think the world has grown darker, it’s become a more anxious place, and I’ve responded to that. Our House is a drama, a thriller, a domestic noir, a crime novel, but I mainly see it as an entertaining puzzle.

I was a copywriter before writing my first fiction and so I’d been a words person for most of my career. I had an idea for a novel and started writing it on holiday for fun. I don’t know what I’d be doing instead, perhaps a few different things, one of those portfolio careers we hear about. Driving a cab, making frappuccinos, selling houses…

5. Do you plot your stories meticulously or do you just write and see where it takes you?

I plot. You can’t write a book like Our House on the hoof, its structure is way too complicated. Characters do evolve, though, as I go. I didn’t expect to bring so much compassion to Bram, but by the end I was writing him as if he were my hero.

6. Could you tell me about your writing day? Where do you write and do you have a daily routine?

I write at home, usually on the sofa, with my cat Tilly by my side. I drink a lot of coffee and eat a lot of chocolate (favourites: Reeses Peanut Butter Cups and anything with salted caramel). There are dog walks and the occasional break to chauffeur my teenage daughter somewhere. It’s a very internalised job performed in a closed environment, so when I have a night out I feel quite deranged.

When I’m writing, I like to read classics, often recommended by my brother, who is a big reader. After I’ve delivered a book, I attack my TBR pile, which is all thrillers and suspense. I’m appearing at Crimefest this year in May and so my next reads are by fellow panelists Amanda Jennings, Sam Carrington, CL Taylor, Elodie Harper, Dirk Kurbjuweit and BA Paris. I always love a Lisa Jewell or Tammy Cohen.

I have no idea. I certainly have a failing: I can’t do names. I find naming characters the most difficult part of the process. I have a rule that characters can only have names authentic to their era, so a forty-five-year-old man has to be Mark or James or Richard. He can’t be Oscar or Rocco. Bram in Our House is short for Abraham. He has a religious mother, so that explains that.

9. What are you planning to write next and where will it take us?

My next novel has a similar setting to Our House, a well-heeled road in south London, where an appalling new neighbour moves in and destroys life as the residents know it. When someone dies, the police wonder if the neighbours have plotted a murder. I tried to keep it very simple and linear after the complexities of Our House, but I proved incapable of doing that. Next time.

Thank you so much, Louise. Your next book sounds fantastic too. Louise Candlish is the bestselling author of twelve novels, including THE SUDDEN DEPARTURE OF THE FRASERS (2015) and THE SWIMMING POOL (2016). Her new thriller OUR HOUSE is published in the UK in April 2018 by Simon & Schuster.

Though her stories are about people facing dark dilemmas, Louise tries to get through the day without too much drama of her own. She lives in South London with her husband and daughter and is very attached to her dog Maggie and cat Tilly.