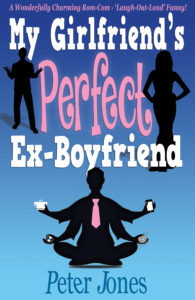 It’s my stop today on the tour for My Girlfriend’s Perfect Ex-Boyfriend by Peter Jones, which sounds like a lot of fun. I’d like to thank Rachel Gilbey of Rachel’s Random Resources for the place on the tour. I’ll be sharing a Q&A with the man himself (Peter Jones, that is, not the ex-boyfriend) but first here’s what it’s about:

Adrian Turner, Mountaineer, Secret Agent, Fireman… Ade would dearly like to be any of these things, though he’d trade them all to win the heart of feisty Public Relations Executive, Paige.

Instead, he’s a disillusioned school teacher, on suspension, after an unfortunate incident with a heavy piece of computer equipment. And somebody’s foot. And Paige? Despite being his girlfriend for the past eighteen months, she still seems to have one foot out of the door and hasn’t quite committed to leaving a toothbrush in the bathroom.

Of course, it doesn’t help that she’s working with her ex-boyfriend, Sebastian. A man who in almost every way imaginable is better, taller, wealthier, hairier, and infinitely more successful than Ade.​

Is Paige still in love with Sebastian? Why then did she suggest they get away for a few days? Some place romantic…

But when Adrian finds himself in Slovenia – with Sebastian in the room down the hall – he realises there’s serious possibility that he’s in danger of losing his job, his mind, and the woman he loves..

From best-selling author Peter Jones comes this hilarious romp about love, and the things people do to keep it from getting away.

1. Can you tell me about the inspiration behind My Girlfriend’s Perfect Ex-Boyfriend please? And are the characters based on anybody you know?

Well now, funny you should ask.

A couple of years back I met my partner who had just come out of a long term relationship. Her split had been quite amicable so it wasn’t uncommon for her to mention… well, let’s call him Steve.

I’d say things like, “I’ve made some fresh bread this weekend,” and she’d say, “oh, Steve used to do that.” Only bloody Steve would have made the bread from flour that he’d milled himself. From a stone that he dug out of the ground. Whilst building his house. Single-handedly.

One day I got so cheesed off hearing how fantastic Steve was I said, “if you don’t shut up about Steve I’m going to put him in a novel and then kill him off!” To which my partner laughed and said, “what would you call the book? My Girlfriend’s Perfect Ex-Boyfriend?”

Well. It was a such a good title, how could I resist? “No!” Said my girlfriend, seeing the light bulb hovering above my head. “You can’t! Absolutely not!” But this was Friday. And you know how this works – by the end of the weekend we had renamed Steve, morphed him into this completely unbearable character called Sebastian. We’d also decided that the protagonist would be a down on his luck school teacher called Adrian, and that his girlfriend would be a sassy American PR executive called Paige, and a plot was beginning to emerge that was just too fun not to write!

Obviously it’s all made up. But that said, I really hope Steve doesn’t recognise himself in it.

2. I see you are the author of not only romantic comedies but also self-help books. Which do you find easier to write and do you follow the advice in your own books?

Easier; non-fiction. More fun; fiction. And yes! Of course I follow my own advice… in fact, that’s how I end up writing a self-help book. Make a lot of mistakes, figure out what works, then write that down.

3. What kind of research do you do, and how long do you spend researching before beginning a book?

So far I haven’t had to do too much research for my novels. Actually, that’s not quite true. Every now and then I might need to know something quite random like – can you get married on the small island in the middle of Lake Bled, Slovenia? (Turns out you can). Other times I need suggestions for something like a truly hideous starter that you might have at a wedding reception. In that case I’ll hop over to Facebook, post the question there, and watch as the (often very amusing) answers flood in.

4. And related to that, do you plot your book meticulously before you start or wing it and see how it comes together?

Before I write a single word I know…

Then; I write ‘draft zero’ (a kind of really boring synopsis), and turn that into a long bulleted to-do list. The list will be updated as I begin, and each scene written will have an entry added to my master fiction spreadsheet which helps me keep track of the story timeline (a blank version of which you can download from here).

That is some impressive planning.

5. If you weren’t a writer what do you think you would be doing now?

Oh Lordy, well I guess I’d still be in credit card banking – wake up! Yes credit card banking is dull! That’s why I left! (Well, partly… that and the fact I was beginning to feel uncomfortable about spending my life separating the man on the street from his hard earned wedge.)

I sometimes like to think that in an alternate universe I’ve have achieved my childhood ambition to either become an actor, or a secret agent – I don’t mind which.

6. Tell me about your writing day. Where do you write and do you have a daily routine?

I’m up and sitting at my desk by 7am. And then I write in five one-hour ‘sprints’, counting my words at the end of each hour. Anything less than 200 words per hour I give myself a stern talking to.

Around midday I might post the days word count on twitface (along with my snivelling excuses), then I  have some lunch and spend most afternoons speaking at a local WI, U3A, or similar group, about writing.

I try and read at night before I go to bed. As for the type of books – I try and read anything that isn’t what I would normally choose myself. So I rely quite heavily upon recommendations from friends, folks on Facebook, and blogs like this.

My favourite authors (the ones who I’m completely in awe of) would be Nick Hornby (his last novel – Funny Girl – was very unusual and very clever), Audrey Niffenegger (Her Fearful Symmetry being my favourite), and more recently Claire North (The First Fifteen Lives of Harry August being my current ‘favourite book of all time’).

I’m not even sure what a writing quirk is!? To be honest with you, all writers are a bit quirky. Particularly, if I’m honest, this author. Which means it’s difficult for me to know what are quirks and what’s… ‘normal behaviour’ {shudder}.

Interestingly, for my first novel, I originally described it as a ‘Quirky Rom-Com’ …which my agent subsequently changed because she felt the word ‘quirky’ would put readers off! It got replaced with the phrase ‘very funny love story’ which is almost as dull as a life spent working in Credit Card Banking.

9. What are you planning to write next?

I’m going back in time for my next book. Back to the 1980s. Big hair. Big music. Big ideas. Still romance (technically), and still comedy (definitely!), but a little darker, a little less frivolous, and a little more inspired by true events. And that’s all I’m saying for now!

Ooh, the 1980s. Sounds fab! Thanks so much for such brilliant and funny answers, Peter 😀

If you like the sound of My Girlfriend’s Perfect Ex-Boyfriend then you can buy it now in ebook and paperback.

And please do have a look at the other blogs on the tour. Peter Jones started professional life as a particularly rubbish graphic designer, followed by a stint as a mediocre petrol pump attendant. After that he got embroiled in the murky world of credit card banking. Fun times.

Nowadays, Peter spends his days writing, or talking about writing. He’s written three novels; a Rom-Com (Romantic Comedy), A Crim-Com (Crime Comedy), and a Rom-Com-Ding-Dong (a sort-of Romantic-ish Comedy, with attitude). He’s currently working on his fourth novel, which – if it’s a musical – he’ll no doubt describe as a Rom-Com-Sing-Song. (Spoiler: It isn’t).

He is also the author of three and a half popular self-help books on the subjects of happiness, staying slim and dating. If you’re overweight, lonely, or unhappy – he’s your guy.