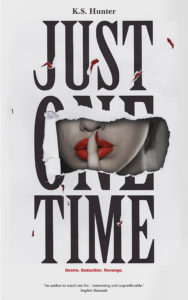 Welcome to my stop on the blog tour for Just One Time by K.S. Hunter. Thank you to Rachel Gilbey from Rachel’s Random Resources for the place on the tour. The more I read about this book the more I wish I had had time to fit in a read of it but unfortunately I couldn’t. What I do have today is a fabulous guest post from the author about the best obsession storylines in films and literature. First, let’s see what the book is about:

Just One Time is available to pre-order now. Here are the links you need:

There are two images in the movie Fatal Attraction (1987) that portray obsession more effectively than in any other movie. In one, Alex Forrest, played by Glenn Close, and Dan Gallagher, played by Michael Douglas, are wrestling over a knife that Alex holds high in the air. There’s a fierce expression of pain on her face as she tries to overpower him. In another, Alex sits emotionless, in stark contrast to the former scene in which she attacks Dan, side by side on a rollercoaster with Dan’s daughter, who she has collected from school without parental consent or knowledge, sending both parents into a frenzy. Her calmness on the rollercoaster while the child’s mother frantically rushes around tell me a lot about the scheming nature of her obsession with Dan, a man she had a fling with while he was on a business trip, a one-night moment to forget for him, but to her something far deeper.

And that’s the point: obsession sits deep inside a person. It’s an emotion that churns the gut of the beholder and sometimes it finds a way out, as in Alex Forrest’s case. And when it gets out, there’s no stopping it. In Alex’s case, she’s the wronged woman, but she’s presented as the villain, the one seeking revenge, the bunny boiler. And she has become one of the most villainous icons in cinematic history.

That wasn’t the way Glenn Close read her when she was first sent the script, however. She viewed Alex as a victim, used by a man for his own gratification and then discarded when he had to return to his normal life. To an extent, I agree with her, but then Alex’s actions are too extreme to keep the sympathy fully on her side. Yes, the audience does emote with her pain, but the moment she turns her attention to Dan’s daughter is, I think, the moment she crosses the line and enters villain territory.

The original ending of the film, which was actually shot and can be viewed on the DVD, saw Alex beating Dan: she commits suicide and frames him for murder. In the final scene, he is arrested. However, Hollywood likes a hero and Michael Douglas played lots of them in the 80s, so the ending was rewritten after the original tested poorly. I like both endings, and the rewritten ending, which features the stereotypical fight between hero and villain with the hero ultimately winning is enjoyable. In fact, I like it so much that I pay homage to part of it in my new novel, Just One Time. I hope readers will be able to spot the moment. I don’t think any other film presents obsession more effectively, but if I turn my attention to literature, one novel stands out as the supreme exploration of obsession: Enduring Love by Ian McEwan. Here, the word ‘enduring’ is ambiguous: either Jed Perry’s love for Joe Rose lasts, no matter what, or Joe has to put up with Jed’s relentless obsessive love. In fact, both readings of the title are wholly appropriate.

And that’s the point: Enduring Love is ostensibly a thriller, but there’s so much depth to the writing. The characters are multi-dimensional and the writing is beautiful. Despite Jed’s protestations to the contrary, on the grounds of his religious beliefs, it’s ultimately a novel that explores homosexual obsession, and that makes it even more unusual and, I believe, even more impactful. Ian McEwan never gives the reader what is expected; he always finds a way to approach a topic from a fresh perspective.

I was surprised a few years ago to be told by my former literary agent that Gone Girl was considered by the industry to be a quality literary thriller. Yes, it’s a good thriller with a great hook (I think it becomes a bit stupid by the end, however), but in no way is it literary. Enduring Love is the epitome of the literary thriller. Read the two side by side and you’ll see there’s no comparison.

Upon Enduring Love’s release, Bill Bryson, reviewing in the Sunday Times, said he couldn’t remember reading a book so compelling from the first page. It’s in the opening chapter that the seeds of Jed’s obsession with Joe are planted, and if you haven’t read it, I dare you to join the characters on their journey. It’s one hell of a ride.

Thank you, K.S. for such an interesting post. It’s many years since I watched Fatal Attraction. I must watch it again some day.

There are lots of other blogs taking part in the tour so please do go and have a look.