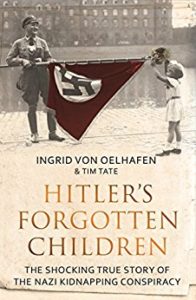 I feel very privileged today to be part of this blog tour for what sounds like an incredibly moving and poignant story. I have an fantastic guest post from Tim Tate for you but first of all here’s what the book is about.

‘More than 70 years ago I was a “gift” for Adolf Hitler. I was stolen as a baby to be part of one of the most terrible of all Nazi experiments: Lebensborn.’

The Lebensborn programme was the brainchild of Himmler: an extraordinary plan to create an Aryan master race, leaving behind thousands of displaced victims in the wake of the Nazi regime.

In Hitler’s Forgotten Children Ingrid von Oelhafen shares her incredible story as a child of the Lebensborn: a lonely childhood with a distant foster family; her painstaking and difficult search for answers in post-war Germany; and finally being reunited with her biological family – with one last shocking truth to be discovered.

Over to Tim to tell us about Ingrid’s incredible story and how he came to write this book with her.

When she was 15 years old Ingrid von Oelhafen saw her face on a poster. It was stuck to a lamppost in the centre of Hamburg.  Her photo was one of several on the paper: beneath them, a caption asked: “Who knows our parents and our origins?”

Ingrid would not find the answer to that question for more than 40 years. For much of her adult life, she had only two clues to her identity: a small pink vaccination certificate and a contract handing her over to the care of foster-parents. Both were dated 1944, and bore not her name but that of someone called Erika Matko.  One was stamped by an organization she had never heard of: Lebensborn.

In 2013 I was commissioned by Channel 5 to make an hour-long investigative history documentary about one of Nazi Germany’s most extraordinary – and ill-understood – experiments: the plan to create a new Aryan Master Race which would be raised to rule Hitler’s Thousand year Reich.  It was called the Lebensborn Programme.

I had come across Lebensborn five years earlier in – of all things – an episode of the BBC police drama series, Waking The Dead.  The plot revolved around a woman who had been “bred” in an SS “stud farm” during World War Two.  It struck me immediately as a potentially strong subject for a documentary; and since the Nazis obsessively recorded all of their most heinous crimes, I presumed that it wouldn’t be too difficult to track down the historical facts behind the dramatic fiction.  I couldn’t have been more wrong.

The second was that behind this nonsense was a real – and much more disturbing – story: the systematic kidnapping of up to half a million Aryan-looking babies by Hitler’s armies from Eastern European countries which the Nazis occupied – children whose origins and identities would be deliberately erased, and who would be handed over to the ‘care’ of SS-run Lebensborn homes to be raised as the future of the Master Race. They were to be Hitler’s Children.

But I also discovered that it was extraordinarily difficult to find anyone who either knew much about this experiment – much less to find any of its survivors.    The entire Lebensborn programme seemed to be enveloped in thick clouds of secrecy.

Eventually, with the help of Dr. Dorothee Schmitz-Köster, an academic and writer who has worked tirelessly on behalf of Lebensborn survivors, I tracked down a dozen elderly men and women, and set out on a three-thousand mile road trip across Europe.  Each of the former Lebensborn children I met had an extraordinary story to tell; five agreed to be filmed for the documentary.  One of them was Ingrid.

She was living in Osnabruck, a quiet city in the historic north-west region of Germany where she had grown up from the age of four.  Within minutes of meeting her, I realised that her life was typical both of the fate of those kidnapped into the Lebensborn program, and of the difficulties its victims had faced for more than 50 years.  But her story was bigger even than this: it was, in microcosm, the history of much of post-war Europe.

Ingrid had been doggedly investigating her origins for more than a decade – and was, though neither of us knew this, still two years away from finding the final pieces of the jigsaw of her life.  She had run into a seemingly impenetrable wall of obstruction and secrecy at almost every stage.  German officials had given her wrong, or misleading, information, while documents – those which survived Lebensborn’s deliberate destruction of its records at the end of the war – were often strangely unavailable in the archives which held them.

Despite this, Ingrid had eventually discovered that her real name was Erika Matko, and that she was born in 1942, in what was then German-occupied Yugoslavia. Her parents were partisans; she was their youngest child – nine months old when the Nazis ordered all families in the area to bring their children to the local school.  There, SS “race assessors” decided that Erika matched an extensive tick-list of Aryan characteristics: she was taken from her parents and transported hundreds of miles to a Lebensborn home inside Germany.  Its officials erased her true identity and subsequently handed her over to a suitably German foster family: Erika Matko became Ingrid von Oelhafen.

At the end of the war, the von Oelhafen family was living in the Soviet-controlled sector of Germany.  In 1947, as Moscow tightened its grip, and the Red Army earned a gruesome reputation for rape and brutality, Ingrid’s foster-mother, Gisela, escaped across the river Aller into the British zone. She left her husband behind, but took Ingrid and her younger foster-brother, recording the dangerous and difficult journey in a small notebook.

But that was as far as Gisela von Oelhafen’s care for the children extended.  She abandoned Ingrid and her foster brother, first to an orphanage and then to the care of their harsh and frightening foster-father who had found his way to the American zone.   She never told Ingrid about her origins or gave her any of the documents about her birth.  It was only after Gisela died that Ingrid found the notebook, the vaccination slip and the Lebensborn papers which allowed her to begin investigating her origins.

That investigation took Ingrid on a painful psychological journey. She discovered that the Lebensborn program was one side of Hitler’s obsession with race and blood; the other side was the Holocaust.  But it also took her on a physical journey into the history and geography of countries brutalised by the Cold War.  It eventually led her to find the remnants of her family in Celje, in modern-day Slovenia – and to meet others who had been snatched from their parents by the Nazis at the same time as she had been.

When I got all the film footage back to my editing suite I realized that Ingrid’s story was simply too big to fit within my Lebensborn documentary.  With some trepidation I begged her forgiveness, but asked if she would agree to us writing a book about her extraordinary – and extraordinarily brave –  journey to discover both the truth about her origins and the Lebensborn program itself.  In 2014 we began work on “Hitler’s Forgotten Children”.

What neither of us knew then was that Ingrid’s story would have one last twist in the tale: the discovery that there was another Erika Matko in Celje – a baby who had been handed by the Nazis to the Matkos as a substitute for Ingrid/Erika, and who had ever since lived the life which would have been Ingrid’s but for her kidnaping by the Lebensborn program.

I have been a journalist, film-maker and author for almost 40 years.  I have, in that time, worked in some of the most traumatised places on earth. From Vietnam and the Philippines, to Chechnya and North Korea I have met extraordinary people with profoundly moving stories.  Few have affected me as much as Ingrid’s brave journey into her own life, and that of the war-scarred history of Europe.   I am deeply privileged to know her – and immensely proud that her story has now been published in ten countries across the world, including Slovenia.

Strangely, however, Germany is not one of them.

Details of all of Tim’s books – as well as viewable copies of many of his films – can be found at www.timtate.co.uk

Thank you so much for that fascinating piece, Tim. Hitler’s Forgotten Children is available now in ebook and paperback.

I have a brilliant opportunity for you to win your own copy of Hitler’s Forgotten Children. Please enter below.

One paperback copy of Hitler’s Forgotten Children (UK only)

My thanks to Alison Menzies at Elliott & Thompson for the place on the blog tour. Don’t forget to check out the other fabulous blogs taking part. About the Author (taken from Amazon) His films – mostly investigative, always campaigning – have been honoured by Amnesty International, the Royal Television Society, UNESCO, The Association for International Broadcasting, The International Documentary Association, the New York Festivals and the US National Academy of Cable Programming. He often speaks at international conferences and university seminars.

He is also the author of twelve published non-fiction books. These include the best-selling “Slave Girl” which told the true story of a young British woman sex-trafficked to Amsterdam, and “Girls With Balls” which uncovered the secret history of women’s football.

His latest books are “Hitler’s Forgotten Children”, which tells the extraordinary and harrowing story of a woman who was part of the Nazi Lebensborn programme to create an Aryan master race; and “Yorkshire Ripper – The Secret Murders” which reveals long-suppressed evidence showing that Peter Sutcliffe killed 23 more victims.