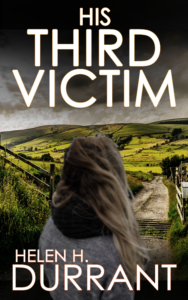 I’m so pleased to be taking part today in the blog tour for His Third Victim by Helen Durrant. Thank you to Jill Burkinshaw of Books n All for the place on the tour. I have a guest post from Helen all about realising her lifelong dream but first here’s what the book is about:

A man is shot dead and his body is dumped on the moors. His arm is stamped with the Chinese symbol for sorry.

There have been five unsolved murders with the same hallmark. The police can’t find any motive or connection between the victims.

Bella Richards was close to the murdered man. She lives with her five-year-old son and has begun a new life in the local area. But although clearly grief-stricken, she is not telling the police everything she knows.

Detective Talbot Dyson wants his most trusted inspector on the case. But DI Matt Brindle is out of action. He was badly injured and his sergeant was killed in a criminal ambush. He is drawn into the investigation and must decide whether he wants to go to back to his old life.

What is the real connection between the victims and who will be next?

This is a detective mystery full of twists and turns, with a stunning edge-of-your-seat ending.

Alice in Wonderland was the first book I read. I always joke that it coloured my entire life! As a child I loved to read — that and listen to the radio. By the time I was ten years old, I’d devoured most of the traditional children’s books and was reading historical novels. It was about that time that I announced to my parents that I was going to be a writer.

However, that ambition took a back seat as real life took over. Education, work, marriage and family life left no time for me to develop those early dreams. When my two daughters were a little more grown up, I did a computing course at Manchester Metropolitan University as a mature student. With a qualification in programming safely in the bag, and some experience in industry, I got a job teaching at a local college. What started out as a few part-time hours turned into a very rewarding job that lasted twenty odd years. The job was great but all-consuming and left no time for writing. Time passed and family life didn’t let up much either. My two daughters married and produced five grandchildren between them. Very convenient having a granny who had the school holidays too! So, writing was still very much on the back burner.

After a little soul-searching, I took early retirement and settled down to write full time. Despite my hectic life, ideas had been bubbling away. The first book had lived inside my head for a long time and I didn’t want to regret never giving it a go. I write sitting on my sofa with my laptop on my knees. In the early days my family looked and wondered, but I didn’t tell them much. This was very much my thing and until I knew where it was going, I kept it under wraps. That first book took shape slowly — chapter by chapter, until it began to look like it could be a reality. Scary — I’d never written anything of that length before! The problem was what to do with it. I’d bought a kindle when they first came out but I’d no idea you could ‘self-publish’ with Amazon. One evening I read about KDP in a magazine. Fired up, I found the link. After doing some research into how easy it was to do, I took the plunge and that first book went live.  Would anyone buy it? If they did — what would they think? Should I ditch the whole thing and go work part-time for my brother? All kinds of doubts filled my head. But I stuck with it and soon realised that one book wasn’t enough. The story had to continue. A second took shape then very soon after — a third. The writing habit was established.

As exciting as all this was, the sales just weren’t happening. What made all the difference was having a publisher like Joffe Books. They liked my books, and signed me up. After a thorough edit, the first novel made the top 100 in the UK and number 1 in three categories. I was astonished. What followed with the others was equally amazing. Being with a publisher was like having a sprinkling of ‘fairy dust’ over the whole enterprise. Sales took off in a way I never imagined. I now have two series of crime novels published, and currently I write them back to back. Where do the ideas come from? People are always asking me this. It could be anything, a headline in a newspaper, something heard on the radio or the TV. I write every day — one book on the go and the next taking shape in my head.  People seem to like them.  When a reader says how much they enjoyed the latest book and asks for another — what can I do other than write! Will I stop? Probably not — I’m well and truly hooked.

Thank you for such a lovely post, Helen. It just shows that it pays to follow your dreams. Helen sets her books in the area she has lived in for many years. The towns and villages that sit in the shelter of the Pennine hills. This is an area between two counties, Lancashire and Yorkshire, and between the city and the hills. It offers a rich mix of the industrial and the countryside and all the character therein.

Helen always planned to write crime novels. But until she retired from full-time work in a local further education college, it had to go on the back burner. Once she did retire – there was no excuse. She now writes full-time. Retirement proper will have to wait!