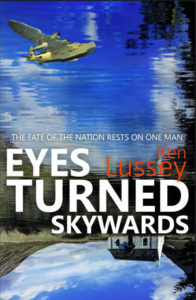 I’m so pleased to be posting today as part of the blog tour for Eyes Turned Skywards by Ken Lussey. Ken has written a guest post for my blog today and I’m very pleased that it’s about the Duke of Kent as I’ve always had an interest in the Royal Family. My thanks to Ken for such an interesting post and to Kelly Lacey from Love Books Group Tours for the place on the tour.

This novel reflects on the rumours and theories surrounding a number of real-life events, including the death of the Duke of Kent and the aircraft crashes of Short Sunderland W4032 and Avro Anson DJ106.
Wing Commander Robert Sutherland has left his days as a pre-war detective far behind him. Or so he thinks. On 25 August 1942 the Duke of Kent, brother of King George VI, is killed in northern Scotland in an unexplained air crash; a second crash soon after suggests a shared, possibly sinister, cause. Bob Sutherland is tasked with visiting the aircraft’s base in Oban and the first crash site in Caithness to gather clues as to who might have had reason to sabotage one, or both, of the aircraft.
Set against the background of a country that is far from united behind Winston Churchill, and the ever-present threat from the enemy, we follow Bob as he unravels layers of deceit and intrigue far beyond anything he expects.

Eyes Turned Skywards and the Duke of Kent by Ken Lussey

There is a very real sense in which Prince George, Duke of Kent, is the most important character in my novel Eyes Turned Skywards. This is a little ironic, because he only appears through the recollections of others, and is already dead by the time the main events in the book take place.

Prince George, Duke of Kent, was born in 1902 as the fourth son of King George V and Queen Mary. His eldest brother Edward became King Edward VIII in January 1936; and his next oldest, Albert, became King George VI on Edward’s abdication in December 1936.

The Duke of Kent married in 1934, yet despite this, he led a colourful private life in the years before the war. During the war he served in various senior positions in the Royal Air Force, and in July 1941 he assumed the rank of Air Commodore, working in the Welfare Section of the RAF Inspector General’s Staff. This was a role that saw him make frequent official visits to RAF bases to help boost wartime morale.

On 25 August 1942, the Duke of Kent was en route as a passenger in a Sunderland flying boat from Invergordon, north of Inverness in Scotland, to RAF Reykjavik in Iceland. The aircraft was meant to fly up the east coast of northern Scotland, before turning to make a direct course to Iceland from the north-eastern tip of the mainland. Instead, the aircraft turned inland when only part way up the coast, and crashed into high ground. Fourteen of the fifteen passengers and crew on board were killed, including the Duke of Kent and three members of his personal staff. The Duke of Kent thus became the first member of the British Royal Family to die on active military service for over 450 years.

At the time, the crash was attributed to errors by the crew. A written answer to a parliamentary question in the House of Commons on 7 October 1942 stated that  responsibility for the crash lay with the aircraft captain. Rather bizarrely, the written answer, as given in Hansard, the official report of proceedings in Parliament, actually gives the wrong date for the crash, 15 August 1942 instead of 25 August 1942. It is unclear how such a significant error, about what would have been, at the time, a very recent and very high-profile event, could have slipped through.

In the years since the crash happened, a number of theories have been aired suggesting the official account was, at best, a cover-up. It’s been said that the Duke was flying not to Iceland, but instead to Sweden on a secret mission; or that he was killed by the British Security Service to prevent him making a peace deal with Hitler, or to prevent some huge personal scandal emerging that would have damaged the monarchy; and it’s also been said that there was an extra passenger on board, whose presence was never officially acknowledged.

To my mind the aura of mystery that surrounds the crash of the Duke of Kent’s aircraft made it an irresistible starting point for Wing Commander Robert Sutherland’s investigation in Eyes Turned Skywards. It seemed to me that there was scope for drawing all the strands together and adding into the mix some dramatic events that certainly didn’t happen, and two strong central characters with compelling stories of their own. The result, I hope, will entertain and intrigue as it takes its readers on a journey across northern Scotland in 1942, a very different place to northern Scotland today.