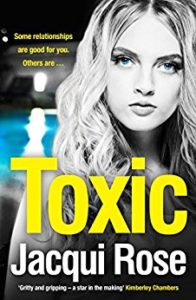 I’m so pleased to be posting today as part of the blog tour for Toxic by my fellow South Yorkshire-woman, Jacqui Rose. My thanks to Sabah Khan from Avon Books of the place on the tour. I have a guest post from Jacqui to share with you today but first, here’s what Toxic is about:

Bree Dwyer is desperate to escape her husband, take the children and run. But he’s always watching. And she always gets caught. Until her first love, Alfie Jennings, returns to Essex…

Gangsters Alfie and Vaughn have been out of the game for a while, but a life of crime is one you never forget.

To get back on top they need serious money, because loyalty and power don’t come for free. One dangerous job and they’ll have the payoff they need. And Alfie isn’t going to let anyone get in the way, least of all a pretty face like Bree.

It’s time to show Essex what they’re made of. And this time, Alfie and Vaughn aren’t backing down.

You can buy Toxic now in ebook and paperback.

How I write by Jacqui Rose

When I meet people one of the most common questions they ask me is about my writing routine and how exactly I go about the whole process as if there’s some kind of magic formula. Sadly, after writing several books I realise there isn’t and what suits one author certainly doesn’t suit another.

I know there’s a lot of discussions out there about the best way to go about writing but I think it’s important that the author finds their own way. For example, my lovely friend, Kimberley Chambers writes her whole manuscript just with pen and paper! I couldn’t imagine doing that in a thousand years as I need to know exactly how many words I’ve written as I work in the number of words rather than in chapters like Kimberley does, i.e. – at the beginning of writing my novel I set myself a target of 1000 words a day with the idea that I’ll finish the book in 3 months – my books are around 90,000 words so writing a 1000 words a day makes it a nice steady pace. However, it rarely works like that, what actually happens is that I think I’ve got all the time in the world and spend the first month not doing very much at all and then I suddenly realise I’ve only got 2 months to complete the novel and what follows is a frantic rush and I’m under increasing pressure to hit my deadline. And there again, is another difference between myself and some other authors I know as I think I work much better under pressure and stress, it gives me a sense of urgency which translates onto the page, driving the story forward giving the narrative pace. Thinking about it, I’m not quite sure if my novels would come out the same way without the pressure as it keeps me focused, but I know several authors who hate feeling under pressure and for them rather than the stress inspiring them to write it stalls the process.

The other question I get asked a lot is if I edit as I go along, or do I write a first messy draft and then go back. Well for me the idea of not creating a first draft where it’s almost publishable is unthinkable! I couldn’t bear it if the draft wasn’t tight and fluid from the outset. So I make a point to edit as I write, therefore when I do start work on the 2nd draft it’s already pretty well structured and polished, again there are a lot of other authors who can’t stand the idea of editing as they go, they just want to get the words down on paper!

Although writing can certainly be hard work, the point is there are no right or wrong ways to go about it, whatever works for you is how it should be done. Whether that is working only during the week and having the weekends off or lighting scented candles to create an ambience, plotting meticulously or just writing on a wing and a prayer, it doesn’t matter, the only thing that does, is to enjoy it and have fun! Jacqui Rose is a novelist who hails from South Yorkshire. Jacqui first came to appreciate the power of the written word when as a child she charged her classmates a packet of sherbet dips to write their essays for them. Adopted at a young age and always a daydreamer, she felt isolated growing up in a small mining village in South Yorkshire and it was her writing which kept her company. Sent to boarding school as a teenager, it was there she discovered her love for acting. After leaving school she studied to be an actress and started teaching drama voluntarily and writing workshops for prisoners, ex-offenders and the homeless, helping them develop and create their own plays but it was several years before Jacqui herself wrote again.