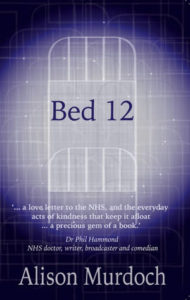 Welcome to my stop on the blog tour for Bed 12 by Alison Murdoch. I’d like to thank The Book Publicist for the opportunity to take part. Alison has very kindly written a guest post about how serious illness made her relationship stronger. First, here’s what Bed 12 is about:

What do you do when the most important person in your life is about to die?

Who can help you?

How do you keep going?

When Alison Murdoch’s husband catches viral encephalitis and falls into a life-threatening coma, everything changes. ‘Bed 12’ is a survival guide to the world of acute medicine, and a poignant and darkly comic account of what it’s like to fight for someone’s life.

Over the course of a summer, machines beep and clatter, medical staff come and go, and family and friends of varying beliefs offer well-intentioned advice. For someone unfamiliar with hospitals, death and dying, the insights of Buddhism assume a greater relevance than ever before. This book is an astute, profound and uplifting insight into how to cope with despair, heartache and the unknown.

‘The object of my concern—or rather the entire focus of my current existence—is now lying in Bed 12.’

Bed 12 is published by Hikari Press and is available now in ebook and paperback.

How serious illness made my relationship stronger by Alison Murdoch

At 2.30pm on a sunny Monday afternoon in July 2011 I decided I needed a break from the computer screen, and went outside for some fresh air. Standing on our front path in South London, I suddenly saw my 58-year-old husband open the gate with the unsteadiness of a man in his mid-eighties. I’d never seen him look like that before. His eyes were half-closed, his skin pale and his movements painfully slow. I had an immediate wordless knowledge that something was dreadfully wrong.

At that time Simon and I had been together for 15 years. Like most marriages, we had our ups and downs. We loved spending time together on holiday, but in between worked long anti-social hours that dented our ability to support and listen to each other. Our different personal styles – Simon spontaneous, me a planner – often made sparks fly. And although he saw himself as a 21st century man, I was convinced that he didn’t do his fair share of household tasks. The usual kinds of things.

I had no idea that our life was about to change completely. By the time we got to A&E, Simon was screaming and writhing like something out of The Exorcist. By the evening he was in a life-threatening coma. I negotiated enough time off work to spend every day of the following five weeks at his bedside in the Intensive Care Unit of St Thomas’ Hospital, trying everything from music to aromatherapy to help bring him back to consciousness. “If he comes round, he may not be the same person that he was before,” said his doctors, avoiding my eyes.

Every morning I arrived at the hospital not knowing whether I’d find Simon dead or alive. In the third week he caught pneumonia, his face turned the colour of bubble gum, and litres of phlegm were artificially extracted from his lungs. All the old clichés came alive for me: that health and relationships matter more than anything else, that nothing can be taken for granted, and that all we can do is live each day as it comes. Even now, the sound of an ambulance takes me right back to that moment when everything can change in an instant.

The upside is that our brush with death has catapulted a good-enough relationship into something far more meaningful and profound. “Thank you for looking after me: teamwork” was one of the first full sentences that Simon put together after he came round, on a never-to-be-forgotten Wednesday that also happened to be our wedding anniversary. Of course there are things that we can never share, understand or do for each other. However we’re also two human beings who’ve genuinely stuck together ‘for better for worse,’ and discovered at first hand that in extremis, few of us will want to be alone.

A partner in a coma can do no wrong. Everyone and everything is focused on helping them re-emerge from that mysterious shadowy state into the daylight world. So I could never have predicted that the months after Simon left hospital would be an even tougher experience for me. We moved temporarily to Devon, where Simon re-learned basic functions such as how to eat and dress, and regained his physical strength with the help of a springer spaniel puppy called Lola. Meanwhile I had to juggle long-distance work with cooking, cleaning and looking after someone who considered himself (as many people do after a brain illness) to be fully recovered. While Simon enjoyed his new spaciousness, I suffered from cabin fever. He woke each morning full of energy and curiosity, while I struggled with exhaustion. Simon felt liberated; I felt enslaved. The independent feminist who signed up for a late marriage in which both parties pursued fulfilling careers and spent a few evenings each week together now found herself joined to her husband at the hip.

The defining characteristic of our new life together was chaos. For example, I found myself married to someone who could no longer manage a bank account. Simon lost his debit card five times in the space of a few weeks, and constantly forgot his pin number. However I quickly learned that getting annoyed with a partner who is recovering from a serious illness is as pointless as criticising someone for being blind or deaf. Simon himself was impervious to the impact he had on me – emotional intelligence is often the first casualty of trauma – and there was no point in making myself more miserable. “For every minute you are angry you lose sixty seconds of happiness” said Ralph Waldo Emerson. However aggravating, I had to accept that Simon was simply doing his best, and that his best was good enough.

I gradually realized that however frazzled I felt inside, the most skilful response was to remain resolutely upbeat and to go with the flow. Managing my own thoughts and emotions was the key to managing whatever life threw at me. Relaxed, amiable and good-humoured became far more important than tidy, organised or value for money, and we came up with a new nickname for Simon—spanielbrain—which served as useful shorthand whenever things didn’t go to plan. In the process, my joy came back. Waking up in bed together, watching master and dog walk along the beach in the autumn sunshine and sitting eating toast in front of the fire all became magical moments, especially when I remembered how very differently things might have turned out.

“At least he’s still alive,” I used to remind myself in the worst of times. Strangely enough, it’s a thought that continues to sustain me. Illness and death can ambush any of us at any time. So my enduring emotion is one of gratitude – that both of us are still here, together, and with a deeper and stronger love for each other than we ever had before.

Thank you so much, Alison, for such an emotive guest post. Alison Murdoch has catalogued paintings for Sotheby’s, established emergency night shelters for homeless people, turned a London courthouse into a vibrant Buddhist centre, set up a catering service for refugees, and run workshops in Asia, Australasia, Central and North America, and Europe. She is a regular contributor to BBC Radio including: ‘Good Morning Sunday’, the ‘Moral Maze’, ‘Women’s Hour’, ‘Prayer for the Day’, ‘Beyond Belief’, and the ‘Chris Evans Show’. Her writing has been translated into four languages. She once smuggled herself into Tibet in the back of a lorry.