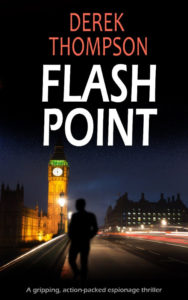 Welcome to my stop on the blog tour for Flashpoint by Derek Thompson. Thank you to Jill from Books n All for asking me to take part. Derek has written a fab guest post for me to share with you today. First, let’s see what Flashpoint is about:

Do you love gripping espionage thrillers full of great twists and plenty of action?

LONDON COMES UNDER ATTACK AND BLADEN’S LIFE IS FALLING APART.

As the security services scramble to deal with the aftermath of a coordinated terror attack, undercover operative Thomas Bladen is in deep trouble. His department has been taken over by MI5, his girlfriend’s gone, and he’s “lost” a handgun during surveillance of a high-profile politician.

Then two of his senior colleagues disappear. Who’s taken them and why? Bladen’s search for answers is blocked at every turn. Is there a double agent in his team?

In a thrilling conclusion, Bladen must face his doubts and put his life at risk against forces whose allegiance is unclear. This is the reckoning.

You can buy the book in ebook and paperback now.

Thomas Bladen works for the UK’s Surveillance Support Unit. He has an eye for details other people miss and a talent for finding trouble – a combination that was never going to bring him an easy life. One decision attracts the wrong kind of attention and changes his perspective forever.

When a mysterious cabal threatens the future of Europe, can one good man really make a difference?

They say write about what you know. But that becomes complicated when fiction and reality collide.

Flashpoint, my fifth Thomas Bladen spy thriller, takes place in July 2005, around the time of the London Bombing. That presented me with new challenges as a writer. It all got a bit more personal.

I may live in the West Country now – have done for years – but I grew up in London. It’s in my blood. Even though I’m of an age now when the London I knew has changed beyond recognition. For example, the market at Angel Lane in Stratford is a dim and distant memory, as is my junior high school – long since demolished and replaced with a car dealership.

Thomas Bladen’s London is familiar to me. His Walthamstow flat is near the William Morris Gallery, where I used to visit (no tearoom in those days!). Miranda’s flat is a few miles away in Bow, not so far from Mile End underground station, where my brother and I would get the train home after finishing our Saturday milk rounds.

That’s all well and good, you might say, but why feature the London Bombing in a novel? Like I intimated at the beginning, it’s complicated.

First, I’ll let you into a secret – it was always my intention. I worked near Liverpool Street for three years, so it was the perfect location for the Surveillance Support Unit’s London East base. I deliberately set Standpoint, the first novel in the series, a handful of years before 07/07/2005 to give Thomas enough experience to develop as a spy chaser. I also wanted time with Thomas and Karl to understand what 07/07 would mean to them.

Of course, I could have ignored 07/07 altogether, as if Thomas’s London had a parallel history. But that didn’t feel right to me. And I remembered that scene in Skyfall where the London Underground train bursts through a wall after an explosion, and how unreasonably angry it made me to see that on the screen, because of what happened on that unforgiving day. (Skyfall is a great film, incidentally, in case the producer is looking for a series to option!)

I decided I needed some rules for writing Flashpoint:

I studied publicly available documents for the chronology of events on 07/07 and also on 21/07, as well as Intelligence reviews and newspaper stories after the event. This was all mostly for context rather than specific details.

I was particularly interested in the personal repercussions for Thomas, Miranda and Karl. Flashpoint also afforded me an opportunity to get under Thomas’s skin in ways I hadn’t done before. Karl’s as well, to an extent. I wanted to examine their prejudices and flaws, and look for tensions between them. The results aren’t always pretty. This novel also touches upon identity, class, religion and race. Thomas, in particular faces, hard questions and uncomfortable answers.

London Pride, incidentally, is one of the names for a wild flower frequently seen on London bombsites after the Blitz. It’s also the title of a famous Noel Coward song, written in 1941. Derek Thompson grew up in London and started writing fiction in his teens. After spending a year in the US, he returned to London and subsequently moved to the West Country.

He wrote a commissioned piece for The Guardian in 2008 and entered the world of freelance writing in 2009. His short fiction has featured in both British and American anthologies, and can be found online. He has also written comedy material for live performance and radio.

His love of film noir and thrillers began with The Big Sleep, and has never left him. Much of his fiction involves death, loss or secrets. As the saying goes: write about what you know.

He writes about Thomas Bladen and his role in the Surveillance Support Unit.