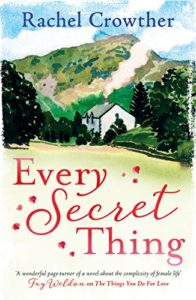 I’m delighted to be on the blog tour today for Every Secret Thing by Rachel Crowther. I have a great guest post from Rachel and my review of this excellent novel for you but first here’s what it’s about:

Secrets and lies in fiction – a guest post by Rachel Crowther

Secrets and lies have long been the stock in trade of novelists and short story writers. Not just crime fiction and potboiler thrillers – plenty of literary classics rest on deeply buried truths and events not spoken of, on skeletons in the cupboard and suppressed memories. Think of Rebecca, of Jane Eyre, of Kate Atkinson’s Behind the Scenes at the Museum or Hilary Mantel’s A Change of Climate: all of them turn on things that have been concealed; that are not known by all the characters, nor indeed by the reader.

Why are we so fascinated by secrets? What makes them such a rich territory for writers, and so absorbing for readers?

It’s tempting to think of them as a cheap trick: a way to make fiction more exciting, more sensational than real life. If you want to paint your characters in technicolour, make them murderers, adulterers, swindlers and deceivers who’ve got away with it, not dull workaday people like your neighbours. Fiction is an escape, after all: why not spice it up a little? Everyone knows most people’s lives are boring, and who’d want to read about them?

But I think the opposite is true. I think human life is richly veined with secrets, with small deceptions, with things we’d rather other people didn’t know about us. Our little disappointments and the way we’ve tried to hide them from the world; the petty transgressions we’re deeply ashamed of; the temptations we haven’t quite managed to resist. People’s lives are rarely as boring as they might seem on casual inspection – and deep down, we all know it. We know things are often not quite what they seem, and we long to know what’s REALLY going on behind that front door, those smart new curtains, that frustratingly high garden fence. Let’s face it: we all like finding things out, uncovering other people’s secrets, or speculating about them in hushed whispers and surreptitious text messages. There’s an irresistible prick of interest when we open a book and see that it promises to peel back the layers of secrecy and deception from its characters’ lives, because this is guilt-free voyeurism, with a guarantee of satisfaction.

But there’s still more to it than that, I think. Our morbid curiosity – powerful enough to extend to the lives of made-up people as well as our friends and colleagues and neighbours – isn’t entirely reprehensible. Novels which centre on secrets and lies are, I would argue, a way of working out in a safe, fictional space some of our own deepest anxieties. They bring us face to face with the uncomfortable truth that we can never really understand other people, even those closest to us. There will always be things we don’t know: what’s going through their mind during those silences at the supper table, or which way they walk to the bus stop; who they think about in the middle of the night but never mention; how they spent their time before we met them. Even our own subconscious minds are mysterious to us, come to that. What might be lurking in there, spawned by some forgotten event or simmering resentment or suppressed fear?

Fiction is a safe space to explore all this. Notwithstanding unreliable narrators and other storytellers’ tricks, we can assume that the author is all-knowing, and that they’ll provide answers. We can give ourselves up to uncertainty, apprehension, suspicion, even outright terror, knowing that all will be revealed by the end of the book – that there are answers to be had, and a resolution of some sort. We can trust the succession of pages to make sense of things for us; to guide us through the doubt and discomfort into a place where things make more sense, and the web of motivations and connections is laid gratifyingly bare.

And of course there’s a wide range of genres to choose from, like the graded rides at a theme park. Not everyone is a Death Drop Rollercoaster sort of reader: the tamer pleasures of the carousel might suit some of us better. And it’s often an intellectual puzzle as well as an emotional one that we’re offered, too. There’s the pleasure of trying to guess the answer before it’s revealed; to spot the clues, home in on the deception, untangle the threads of the characters’ intertwined stories. Roll up, roll up: there’s something for everyone here on the bookshelves.

But what of the writer in all this? Are we busy devising our wares purely to satisfy the appetites of readers? Well, yes and no. Secret and lies are fascinating for authors, too. They drive plot and motivate characters. In fact secrets help to shape characters, making them properly complex, rounded beings – and then they give us the opportunity to put them on the rack, exploring their reactions to difficult circumstances as the fault lines of their lies and deceptions – malignant or unwitting – come to the surface. They give us a route into the human psyche, and the means to investigate it. They help us find out things about ourselves, along the way – and with any luck, they deliver a story that other people are going to want to read.

Rachel Crowther is being likened to Joanna Trollope and I think I can see why. Her work is what I would call literary fiction. It’s intelligent and thoughtful. However, where I have never managed to finish a Trollope, I did really enjoy this Crowther!

I did struggle a little with it at first, in part because of the writing style and in part because I had a hangover from my previous book and I went into this one quite literally straight after. But once I had got used to the style and the characters I found myself really drawn into the lives of these five friends from Cambridge University.

We meet them in 1995. Stephen, Bill, Judith, Cressida and Marmion have been taken under the wing of Fay, an older woman who has links to the University. Just before they graduate Fay takes them to her cottage in the Lake District where a series of events changes their lives forever. Twenty years later they are summoned back there and we see the paths their lives have taken and how the events of that fateful trip to the Lakes have shaped everything that came after.

The two strands are not told in big chunks but in fairly short chapters and the story flits around a lot between 1995, 2015 and certain other relevant times. This worked so well as it drip fed the story and let it unfold very gradually. I was never confused as to what was happening or which time I was reading about.

The five students are choristers and there is a strong musical element in the book which I loved. I could imagine them singing together just as I could imagine the cottage in the Lakes. The descriptions are vivid and the characters are well written.

There is depth to Rachel Crowther’s writing. This is an absorbing and intense tale which I found required quite a bit of concentration but I liked it a lot.

With thanks to Bookollective for the review copy and the place on the blog tour.

So if you like the sound of the book you can get it now in ebook and paperback. And why not check out the other stops on the tour. Rachel Crowther is a doctor who worked for the NHS for 20 years and is the mother of five children. She dabbled in creative writing between babies and medical exams, until an Arvon course prompted her to take it more seriously. She’s also a keen musician and cook.