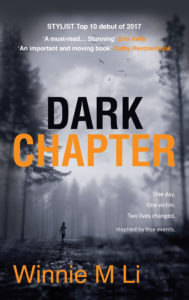 Posted on 1st November 2017 By Nicola

I’m so pleased to be taking part today in the blog tour for Winnie Li’s novel, Dark Chapter which recently won the Not the Booker Prize for 2017. Thank you to Imogen Harris from Legend Press for the place on the tour. I have a fabulous Q&A with Winnie but first let’s see what Dark Chapter is about:

Vivian is a cosmopolitan Taiwanese-American tourist who often escapes her busy life in London through adventure and travel. Johnny is a 15-year-old Irish teenager, living a neglected life on the margins of society. On a bright spring afternoon in West Belfast, their paths collide during a horrifying act of violence. In the aftermath, each is forced to confront the chain of events that led to the attack. Inspired by true events, this is a story of the dark chapters and chance encounters that can irrevocably determine the shape of our lives.

Dark Chapter is available now in ebook and paperback.

1. I understand that the themes within Dark Chapter are based on your own experiences. How hard was it to write about something so personal to you and why did you choose to do so?

As someone who’s always been a writer, I felt it was impossible NOT to write about my own rape. How could I live through such a life-changing event and not try to address its significance through writing? Especially, when I knew it was a topic which affects so many people in our population. It wasn’t easy, but honestly, writing about it was much easier than living through those experiences!  And somehow in creating fiction around my lived experience, I was in a way able to exert a sense of control over the trauma, which I didn’t have during the actual crime.

2. Why did you choose West Belfast as the setting for your novel?

It was also the setting for my own rape in real life, and I was intrigued by that city’s unique history and communities, which themselves owed a lot to a certain kind of political violence. Also, in writing and researching about West Belfast, I knew that I would somehow be forced to address and re-shape my own relationship with the city of my rape.

3. According to your bio you are addicted to travel. Where have you most enjoyed visiting and which place that you haven’t yet been to would you most like to visit?

Each place offers so much to learn about, that it’s hard to pick favourites (I’ve been to 60+ countries, I think?).  But I do really like the Scottish Highlands, Bali, Croatia, Ghana, and Oman. Of course, there are loads of places that I’d like to visit, but since it’s nearby and fairly easy to visit, I’ll say Iceland.  As a ‘reach’ place, I’ll say Afghanistan.

This is my first novel, and because half of it is autobiographical, I felt I was giving myself a bit of a break because at least that half wouldn’t require much research!  The other half, which is written from a perpetrator’s fictional perspective did require a lot of research, because I felt I had a certain responsibility to portray a violent juvenile sex offender in a realistic way.  So I interviewed a number of forensic psychologists and social workers who work with young offenders, visited prisons, and read a lot of novels with similar characters.  Going to Belfast was another major part of my research, understanding the place, chatting with members of the West Belfast community and professionals involved in the criminal justice system.  I also sat through rape trials in London and Belfast. And because my perpetrator came from the Irish Traveller community, I did a lot of research (ethnographic and otherwise) into that group of people and the injustices and prejudice they might experience.

No, I’m kind of half way in between.  I have an overall sense of my plot, character arcs, and where I want to be heading — but when it comes to writing each individual scene, I just kind of wing it. I’ll plan like: ‘in this scene, x happens to y’ but then all the fun is in seeing how things develop in greater detail.  I have a similar approach to life: you can’t plan too much out, because so much excitement lies in the unpredictability of things.  (Likewise, you can’t predict when tragic things happen to you unexpectedly, so you just need to roll with the unexpected.)

Well, I was a film producer before my own assault and rape, so I might still be making films today.  Otherwise, I’d probably be programming for film festivals, which is the job I eventually took on after my trauma, but before I decided to quit everything and write Dark Chapter.

I write from home normally.  I wait for my flatmates to go to work, and then I take over the table in the lounge, make some breakfast, and try to be writing by 9am. This doesn’t always work, as I tend to procrastinate a lot!  If I’m in first draft mode, I generally won’t let myself leave the house until I’ve written at least 1000 words, ideally 2000.  But if I want to mix it up a bit, I might take my headphones and write in a cafe, library, or some place like the Tate Museum.  The key thing is to disable my WiFi, so I don’t surf the Internet endlessly!

I think reading is equally essential as writing, if you’re trying to be a decent writer. So I make sure I’m constantly reading something, constantly filling that well.  I’ll read quite widely, anything that might be relevant to my book. When I’m not actively writing, I’ll still read anything.  I like good literary novels, but I’m also a particular fan of travel and nature writing, and the occasional high-quality graphic novel.

I tend to drink Earl Grey tea when writing and editing. And I prefer absolute silence, although some ambient background noise or white noise is manageable.

A historical novel, set in London. Since Dark Chapter (and the surrounding publicity) was so tied to my own life, I’m looking forward to writing something completely different!

Thank you so much, Winnie and many congratulations on your recent win. Winnie M Li is a writer and producer. A Harvard graduate, she has written for travel guide  books, produced independent feature films, programmed for film festivals and developed ecotourism projects. After graduating with Distinction in Creative Writing at Goldsmiths,  she now writes across a range of media (including the Huffington Post), runs arts festivals,  and is a PhD researcher at LSE. Winnie lives in London, yet is somewhat addicted to travel.