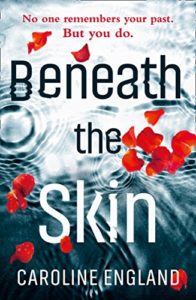 #blogtour – Beneath the Skin by Caroline England @CazEngland @AvonBooksUK #GuestPost

I’m delighted to be on the blog tour today for Beneath the Skin by Caroline England. Thank you to Sabah Khan from Avon Books for the place on the tour. I have a guest post from Caroline with five things you don’t know about her but first this is what the book is about:

No-one remembers your past. But you do.

‘Antonia, Antonia. My name is Antonia.’

It’s been her name for many years. But sometimes, like tonight, she forgets.

Antonia has a secret. A secret so dark and so deep that she can barely admit it to herself. Instead, she treats herself to Friday night sessions of self-harm while her husband David is at the pub, and her best friend Sophie is drinking too much wine a few doors down.

Nobody close to her knows the truth about what the teenage Antonia saw all those years ago. No-one, that is, except her mother. But Candy is in a care home now, her mind too addled to remember the truth. Antonia is safe. Isn’t she?

The lies start small. They always do. But when the tightly woven story you’ve told yourself begins to unravel, the truth threatens to come to the surface. And then what’s going to happen?

Five things you don’t know about me!

1. A little like Frankenstein, I have nuts and bolts in my leg. It was the morning after moving into my current home and my two year old was crying at the bottom of the stairs. In my haste to dash to her, I slipped on the carpet and tumbled down the stairs, whacking my ankle against the wall. It fractured in three places, so the hospital inserted a metal plate. The heads of the slightly protruding screws don’t look pretty!

2. I love animals and smiling at dogs. Since leaving home I’ve owned a dog, six cats, four hamsters and many goldfish. My husband and I took on two ‘male’ rabbits for our daughters which, to our astonishment, turned into twenty-eight at the final count! We currently have three cats and it was a dream come true when my girls discovered two of them, abandoned as kittens. I found a stray suicidal dog the other day who seemed keen to stay. My hope of keeping said dog was smashed when the owner came to claim her (sadly the dog had canine Alzheimer’s). I get super excited to spot any wildlife on holiday. The monster-sized crab under my sun bed and the amazing sea life (including a long spotted sea snake and a HUGE sea slug) when I snorkelled were the highlights of this year in Jamaica. Sadly, not one rabbit or stray dog in sight, though.

3. Influenced by the punk scene, I pierced my own ear with a sewing needle when I was thirteen. It took a while to negotiate the gristle, but I was pleased with my one piercing. However, when I was a little older and wanted to wear two pretty earrings, I had to do it all again – with far less enthusiasm!

4. I ran the Wilmslow half marathon a few years ago. Including a steep hill in the final stretch was just cruel! I love the camaraderie of running in a crowd, so I regressed to 5k park runs. My running prowess has now shrunk to twelve minutes around our fabulous Fletcher Moss park on a Sunday. I listen to the church bells and the birds and think, ‘I’m going backwards in fitness; whatever! I’m still running!’

5. I’m not necessarily how I appear. Except when I’m writing (and resemble a vagrant), I do like to wear lipstick and my undies always have to match, but I hate being the centre of attention. I think I’m better on the page than in person. I’m ridiculously over-sensitive too. This isn’t a good thing when you’re a writer and your debut novel is about to be published! But at the end of the day, many novels are like peanut butter. Not everybody is going to like it. I like nuts very much; pecan and macadamia are my current favourites, but they’re certainly not for everyone!

Thanks so much, Caroline, that was great.

If you like the sound of Beneath the Skin then you can buy it now in ebook and paperback.

And please do check out the other blogs on the tour. Caroline England is a former divorce lawyer, whose fiction has appeared in various literary magazines. Her novel Lie With Me Under The Toothbrush Tree was shortlisted for the Impress Prize last year, and she has also had two collections of short stories published as e-editions by ACHUKAbooks. Her work has also been featured in Litro Magazine’s StorySunday.