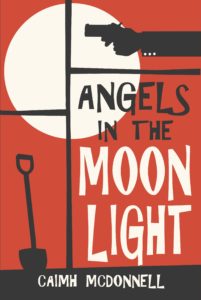 I’m so pleased today to be on the blog tour for Angels in the Moonlight by Caimh McDonnell. I’ve heard a lot about this author’s books and am pleased to be sharing a funny guest post with you today. First, here’s the all-important blurb:

For Detective Bunny McGarry, life is complicated, and it is about to get more so.

It’s 1999 and his hard-won reputation amongst Dublin’s criminal fraternity, for being a massive pain in the backside, is unfortunately shared by his bosses. His partner has a career-threatening gambling problem and, oh yeah, Bunny’s finally been given a crack at the big time. He is set the task of bringing down the most skilled and ruthless armed robbers in Irish history. So, the last thing he needs in his life is yet another complication.

Her name is Simone. She is smart, funny, talented and, well, complicated. When her shocking past turns up to threaten her and Bunny’s chance at a future, things get very complicated indeed. If the choice is upholding the law or protecting those he loves, which way will the big fella turn?

Angels in the Moonlight is the standalone prequel to Caimh McDonnell’s critically acclaimed Dublin Trilogy, and it is complicated.

Rosencrantz and Guildenstern are working on the Death Star

I realise this makes me quite peculiar, but I am ever so slightly obsessed with the bits of films and novels that you don’t see. My favorite part of the sublime Family Guy re-imaginings of the Star Wars movies is the scene where two guards on the Death Star, perfectly recreated from the original film, are moaning about health and safety; in particular how they appear to be standing right beside a tunnel that spaceships come hurtling down.

“I said to him, forget the dental plan, forget the pension, I just want a railing! Then, get this, he said they worried we’d be leaning all day!”

“Leaning? Well, none of this will matter when we’re famous singers.”

Something in me just loves the idea of secondary characters, or as in this case extras, having a full life. I really want to know more about that duo’s musical career. Are they the Milli Vanilli of a place a long time ago, in a galaxy far, far away? One of the best bits of writing advice I ever heard is that everyone is the hero of his/her own story. It’s something I try and remember when creating every character in my books. Badly written characters are the ones whose only ambition in life appears to be informing your main character of a piece of information before walking off into the void from whence they came.

I could of course have started this article off with referencing Tom Stoppard’s Rosencrantz and Guildenstern Are Dead but Family Guy is more in my wheelhouse. Stoppard is a genius but I also greatly enjoy a good fart joke.

There is, however, a danger in making sure that all of your characters have complete lives outside of your work, and that is that they won’t go away when you’re done with them. Having now completed the first two books of my Dublin Trilogy and a prequel set eighteen years beforehand, I’ve got a long list of characters who are metaphorically waiting for me to return their call so they can bring me up-to-speed on what they’ve been up to.

An example of characters out-growing the confines of my story, is an order of nuns that appear in my latest book, Angels in the Moonlight, the prequel to the trilogy which is set in 1999. They popped into existence because the plot needed a woman in trouble to get out of America and start a new life in Dublin. This is where The Sisters of The Saint banged on my door to introduce themselves. As they explained, they are an order of rogue nuns who go where others fear to tread, to fight injustice and help those in need, regardless of the dangers. They are essentially the A-Team only, y’know, arse-kicking nuns. Frankly, they started out as a relatively light-hearted concept that would work well in juxtaposition with the darkness of this woman’s tortured past. Thing is though, I don’t know about you, but once the sisters had introduced themselves, I wanted to know more. In fact, I found myself increasingly distracted by the questions I had for them.

The only way to scratch this particular itch was to give them their own story, where I could delve into their backstory and answer at least some of the questions I had. The result was the novella Sisters Gonna Work It Out which I give away for free at the back of my book. The initial idea was to write a light-hearted romp, think Avengers Assemble meets every 1980s action movie, I thought it’d be a fun little distraction for me and hopefully the reader. Unfortunately, the more I wrote them, the more real they became. Suddenly, a fun concept had morphed into so much more than that, and now I’m left with yet more questions. I want to see The Sisters in action again. Suddenly, I find myself with three more mouths to feed. I’m beginning to release why the writers of Dynasty killed off most of the cast in the final episode.

I’m sure most authors probably know what I’ve only just realised – beware of taking your creations out for a casual Sunday drive of the imagination, if you’re not careful they might just hijack the car and take you hostage..

With thanks to Caimh for that fabulous guest post and to Elaine Ofori and Bookollective for the spot on the blog tour. If you like the sound of Angels in the Moonlight you can buy it from Amazon UK or Amazon US.

And check out the other blogs taking part in the tour. Caimh McDonnell is an award-winning stand-up comedian, author and writer of televisual treats. Born in Limerick and raised in Dublin, he has taken the hop across the water and now calls Manchester his home.

He is a man who wears many hats. As well as being an author, he is an award-winning writer for TV, a stand-up comedian and ‘the voice’ of London Irish rugby club. His debut novel, A Man with One of Those Faces was released in 2016 and it is the first book of the Dublin Trilogy series. The follow-up, The Day That Never Come was published in 2017. Both books are fast-paced crime thrillers set in Caimh’s home town of Dublin and they are laced with distinctly Irish acerbic wit.

Caimh’s TV writing credits include The Sarah Millican Television Programme, A League of Their Own, Mock the Week and Have I Got News for You. He also works as a children’s TV writer and was BAFTA nominated for the animated series ‘Pet Squad’ which he created.

During his time on the British stand-up circuit, Caimh has firmly established himself as the white-haired Irishman whose name nobody can pronounce. He has brought the funny worldwide, doing stand-up tours of the Far East, the Middle East and Near East (Norwich).