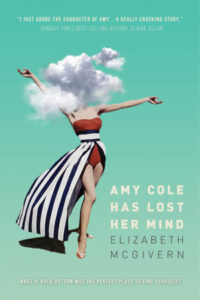 I’m so pleased to be posting today as part of the blog tour for Amy Cole Has Lost Her Mind by Elizabeth McGivern. Thank you to Rachel Gilbey from Rachel’s Random Resources for the place on the tour. I have a lovely guest post by Elizabeth to share with you today. Here’s what the book is about:

Amy Cole is a stay-at-home mum and a woman on the edge.
After a very public breakdown and failed suicide attempt, Amy finds herself trying to make it through her everyday life as a high-functioning zombie.
Elle De Bruyn is a force of nature ready to shake Amy back to life whether she likes it or not.
After a fortuitous meeting, the two embark on a journey together which will change them both and help them find out exactly what they’re capable of when rock bottom is just the beginning.

When my son was 17 weeks old I started to write a parenting blog, documenting life as a new mum called: Mayhem and Beyond.

At the beginning I was happy to chat about funny stories and basically try to find the humour in my struggles to learn as I went along. During this time I suffered an early miscarriage and after that, things began to unravel. I was hit hard with a depressive episode and managed to convince myself that the only way my baby would be free of the burden of a mother who was basically a high-functioning zombie, would be to end my life. Long story short, I reached out to my husband who set in motion the help I desperately needed.

I found that I could no longer just write about humorous anecdotes and pretend that I wasn’t picking myself up off the ground. I felt that by addressing that this ‘thing’ had happened to me and sharing it with other parents, I could have some closure on it.

That didn’t quite go to plan. After sharing the post I found my voice properly. I found it easier and easier to open up about mental health topics – mixed in with the humour that I love. Anytime I shared a post regarding topics on coping with postnatal depression, CBT, miscarriage or alternative therapies I would receive an influx of private messages from people who appreciated the honesty and I was able to let them feel a little less alone in their struggle. I had always intended to write a book, there are at least five barely started manuscripts in my laptop but this time I felt this was a story that could help people.

Honestly that makes it sound like a great noble plan, really it was more like a therapy for me more than anything. Amy Cole, although she goes through many of the same struggles I did, is not based on me or even any one person. She’s made up of all those people who got in touch via the blog and I wanted to give all of us a voice.

When I was in the throes of a depressive episode I was filled with anxiety about sharing this book so by finishing it, publishing it and promoting it I feel it’s my way of giving a big middle-finger to my anxiety and breaking free from it.

I could never sit down and write a literary work of genius that could eloquently describe depression in all its complexity, there always had to be humour. It’s not my way of making light of the disease; it’s my way of explaining that, for me, humour could save me from my darkest points. Even for a split second, things might not seem so bleak.

The tagline of the book is: What if rock bottom was the perfect way to find yourself, and that’s exactly what happened with me and how this whole book was born.

My main hope is that by reading this, it can give someone a reprise from a bad day – even for a minute.

Thank you for such an interesting and honest guest post, Elizabeth. In an effort to keep her sanity she decided to write a parenting blog after the birth of her first son so she can pinpoint the exact moment she failed as a mother.

In an unexpected turn of events, the blog helped her to find a voice and connect with parents in similar situations; namely those who were struggling with mental health issues and parenting. It was because of this encouragement – and wanting to avoid her children as much as possible – her debut novel, Amy Cole has lost her mind, was born.

Elizabeth lives in Northern Ireland although wishes she could relocate to Iceland on a daily basis. To witness her regular failings as a parent you can find her on: