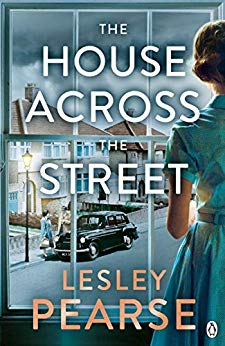 I’m a huge fan of Lesley Pearse and I first reviewed The House Across the Street in September last year. Today is paperback publication day and it has a gorgeous new cover, so I’m sharing my review again. Congratulations, Lesley!

Is there a murderer across the street?

It’s 1964 and twenty-three-year-old Katy Speed is fascinated by glamorous Gloria and the goings-on at her house over the road.

Who are the mysterious women that keep coming and going in the strange black car?

Then one night, Gloria’s house burns to the ground. Bodies are found in the wreckage.

And Katy’s horror turns to disbelief when her own father is arrested and charged with murder.

Determined to prove his innocence, Katy sets out to uncover the truth about the mysterious house across the street and find the real murderer. But that means risking her own life . . .