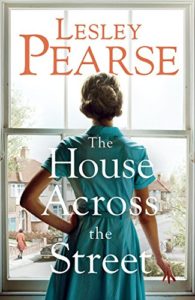 Posted on 6th September 2018 By Nicola

I’m absolutely over the moon to be sharing my review of The House Across the Street by Lesley Pearse today and I’m even more thrilled to be doing so on publication day. Congratulations, Lesley, on your 26th book! I’m a huge fan and loved this book so much. My thanks to Ed Public Relations for the review copy and for asking me to be a part of the blog tour. How could I refuse?!

Twenty-three year old Katy Speed is fascinated by the house across the street. The woman who lives there, Gloria, is the most glamorous neighbour on the avenue, owning a fashionable dress shop in Bexhill-on-Sea. But who is the woman who arrives in the black car most Saturdays while Gloria is at work? Sometimes she brings women to the house, other times they have children.

Hilda, Katy’s mother, disapproves of Gloria. She wonders if these mysterious visitors have just been released from prison. Is Gloria secretly bringing criminals, or worse, into the heart of the community?

Then one night, the house burns down. In the wreckage, the bodies of Gloria and her daughter are found. Katy is sure the unexplained visitors must be responsible until her father is arrested and charged with murder. Have the police arrested the correct person? Are the rest of the street safe? Can Katy find the truth before it’s too late?

The House Across The Street by Lesley Pearse is published on 6th September in hardback by Michael Joseph priced £20.00. This year is Lesley’s 25th anniversary year in publishing.