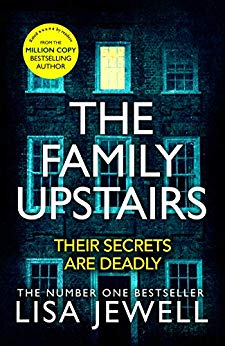 Oh I do love a Lisa Jewell book. I’ve been a fan from her first book, Ralph’s Party, and always enjoy her work. The Family Upstairs is her latest book, just published in hardback and ebook on 8th August. My thanks to Laura Brooke from Century for the proof copy for review purposes.

In a large house in London’s fashionable Chelsea, a baby is awake in her cot. Well-fed and cared for, she is happily waiting for someone to pick her up.

In the kitchen lie three decomposing corpses. Close to them is a hastily scrawled note.

They’ve been dead for several days.

Who has been looking after the baby?

And where did they go?

Two entangled families.
A house with the darkest of secrets.
A compulsive new thriller from Lisa Jewell. I’m a huge fan of Lisa Jewell’s writing and would always pick up one of her books without even reading the blurb. In the case of The Family Upstairs the blurb only hints at the story within and this is a book that is multi-layered and full of surprises. The scant blurb does leave me thinking I need to be careful to give nothing extra away so that it can be approached blind, as I did.

It’s a fabulously tangled story of the family who lived in a huge and beautiful house in Chelsea 25 years ago and another family who came along and changed their lives forever. The house is central to the plot as it’s where almost all of the action takes place, both in the past and in the current storyline, the passing of 25 years being the catalyst for many secrets of the past to come to light.

I was so fascinated by the idea of the baby being found in the house, obviously cared for and yet the only adults still around were dead, a suicide note at their side. So who was looking after the baby? Like I say though, that’s just the tip of the iceberg and I found it so compelling to read as the whole tale unfolded. It’s a master class in plotting, in keeping the reader in the dark until the very moment it becomes necessary to reveal what has happened and when that reveal came it was quite often a revelation for me.

This is psychological fiction at its very best. Lisa Jewell seems to be able to turn her hand to more than one genre and succeed. She’s certain cracked it with this one. The ending when it came was brilliant, really quite sinister and unsettling. This is a big book but I raced through it and found it hard to put it down.

There is a cast of often unlikeable characters, each one of them complex and so interesting. We see their side of events through the multiple points of view and I thought this was a really clever way of putting across all aspects of the story, especially as one of them was very unreliable. It’s a dark and unnerving story of control and power and it’s just so incredibly good.

Lisa Jewell was born in London. Her first novel, Ralph’s Party, was published in 1999. It was the best-selling debut novel of the year. Since then she has published another sixteen novels, most recently a number of dark psychological thrillers, including The Girls and Then She Was Gone (both of which were Richard & Judy Book Club picks). Lisa is a top ten New York Times and number one Sunday Times author who has been published worldwide in over twenty-five languages. She lives in north London with her husband, two daughters, two cats, two guinea pigs and the best dog in the world.