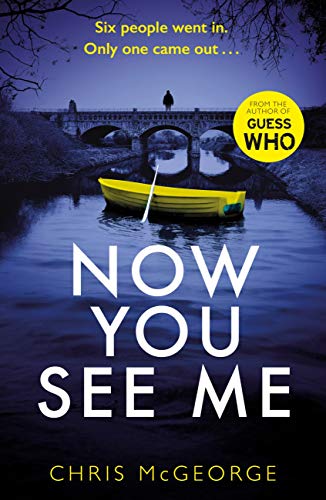 I’m pleased to be reviewing Now You See Me by Chris McGeorge today as part of the blog tour. My thanks to Tracy Fenton from Compulsive Readers for the place on the tour and for sending me a copy of the ebook for review purposes.

My name is Matthew McConnell. You’ve probably heard my story.
I took five of my friends on a boat through the longest canal tunnel in England.

It takes two hours and twenty-six minutes to travel through that tunnel.
Six of us entered that tunnel but I was the only one to come out.

It was pitch black in there – I don’t know what happened to them. But I’m the only suspect.
And if I don’t find out how they disappeared, I’ll be sentenced to murder.

The premise of this book captured my imagination immediately. Not a locked room mystery but a closed canal tunnel mystery. The blurb doesn’t quite tell all the story as although it is about Matthew McConnell and his five friends, it’s also about Robin Ferringham, a man who takes a call from Matthew at his book signing.

Robin has written a book about his missing wife, Sam when the call comes out of the blue. He doesn’t know Matthew and can’t imagine why he’s ringing him but it seems like it could be connected to Sam’s disappearance. Robin decides to help Matthew, who is in prison accused of making his five friends disappear whilst on a narrowboat in the canal tunnel, the longest one in England. The five, like Robin’s wife, have never been found and the only suspect is Matthew as he, and a dog, were the only ones to emerge from the tunnel at the other end.

Intriguing, huh? I have to say, the idea of that tunnel makes me shudder. I don’t like tunnels at the best of times but one where people disappear never to be seen again? Crikey! I really enjoyed the start of this book, when Robin begins his investigations and the whole story of what happened on that canal that day is unravelled. Such a clever idea and it really kept me guessing.

I did find some of what went on to happen a bit far-fetched but I know that’s how some psychological thrillers have to be to have the clever twists. For me, it lost a little something when it went into the realms of fisticuffs rather than intelligent investigations but again, this is personal taste.

I didn’t see the end coming at all. It’s both sad and shocking, and I’m not entirely sure I understand the ‘whys’ but ultimately I raced through this exciting and quite sinister thriller. McGeorge is clearly an author who likes to write gripping and cleverly plotted stories. This is one for readers who like to be challenged and swept along with a fast paced storyline. I enjoyed it. Chris McGeorge is a graduate of MA Creative Writing (Crime/Thriller) from City University London where he wrote debut thriller Guess Who as his thesis. He told stories from an early age, writing and drawing comics and then scripts and finally novels. He loves Golden Age crime and gets incredibly excited about anything a little out of the ordinary. In his spare time, he is an actor with Durham Dramatic Society.

He lives in Durham with his hamster, Agatha Christie.