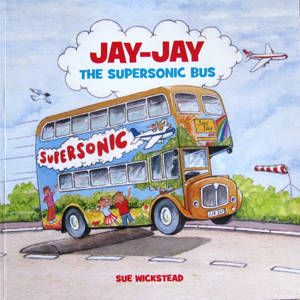 I’m so pleased to be a part of the one day blog blitz for Jay-Jay The Supersonic Bus by Sue Wickstead today. There’s also a chance to win a copy of the next Jay-Jay bus story (spoiler: it’s just as good as this one). My thanks to Sue Wickstead for sending a copy of the book for review and to Rachel Gilbey from Rachel’s Random Resources for the place on the tour.

Jay-Jay the bus is rescued from the dirty scrap yard, where he was sadly gathering dust and cobwebs. Feeling nervous yet excited, he is taken to an airport where he is magically transformed into a ‘Playbus’ full of toys, games and adventure.

A fictional tale based on a real-life bus ‘Supersonic’, which flew in the imaginations of the many young children who visited it.

Jay-Jay the Supersonic Bus will be 99p until 22nd April. Additional bus models and books also offered as a promotion on request.

I got Jay-Jay the Supersonic Bus to read with my five year old son, but actually I really enjoyed it too. It’s a fabulous tale and what makes it even better is that it’s based on a real life bus.

Jay-Jay gets a new lease of life when he is found in a scrap yard. His name comes from his registration number – JJK 261 – in case you were wondering. He’s taken to an airport where he is made into a play bus. All his seats are removed and carpets and cupboards are put in so that children can come along and have fun. Jay-Jay is over the moon to be so useful.

This is a delightful story. It’s a nice length, just short enough that it can be read in one go but long enough to offer a bit of depth to the story and to look at Jay-Jay’s feelings, first of all about being left in the scrap yard and then being useful all over again.

The illustrations are gorgeous and complement the story perfectly. They’re lovely and colourful and really helped to bring the story to life.

I’m pleased to say that this is not the last we have seen of Jay-Jay as we’ve since read the next instalment. I know my son would be happy to read lots more about the supersonic bus and his adventures, and so would I.

Giveaway to Win Jay-Jay and the Island Adventure (UK Only)